Messed up, imperfect, but worth my (and maybe your) time 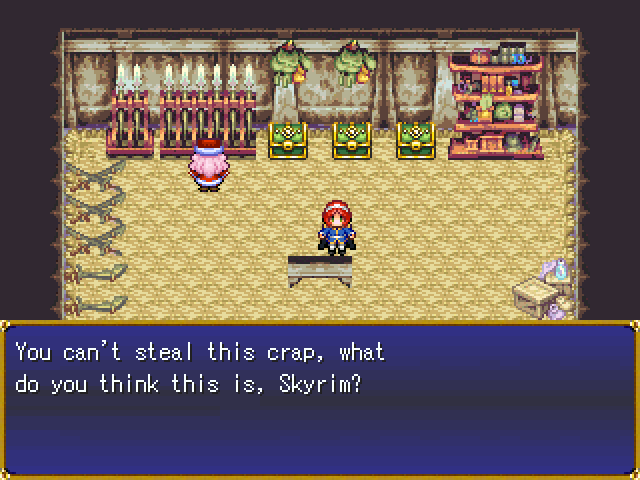 NO, this game is clearly NOT SKYRIM!

And probably not the best Rpgmaker game you will play...
Still, this was the BEST comedy Jrpg I played so far! ( butI've still to play Fragile Hearts 2!)

So before you start playing and before I start the review I've an advice: accept this game with just the goal to have fun, because this is what the game does.
Let's go!

The Good...
A mediocre dumb knight, an unemployed witch with a talking cat (that was a human once) and a senile wizard/healer are the protagonists of this funny adventure, each one with his unlockable skills (the knight has special attacks and pets, the withc has elemental attacks, and so on). So far nothing new.
They have to defeat a Dark Lord. Again, nothing new.
What is different is the dialogue and the funny/weird/creepy humorous situations they get into. Dialogues are simply great, I chuckled several times.

And also the game is not that hard, even if some save points... erhm... crackers save points only work once. Just some.

Combat is side view with battlers, as usual you have MP to unleash the most powerful moves, nothing new but it's ok, combat in this game is not that hard, and you always see your opponents so you can avoid them most of the times, except for scripted battles.
On the various maps you will also find and collect items that will give you edges in combat: they are usually bonuses, new moves or better equipments, so exploration is often rewarded. Oh and chapters are not that long and you are fully healed after each one.
There are some puzzles too, and they are SO easy but hey ... better than nothing I guess!

Music is a great selection and I approved the choice in most situations as it contribuites a lot to the feeling of parody of this game.
Ok, writing is good, the story plays on the cliches of course, but the graphics?
Well these are REALLY good, it's a game full of bright colours (that contrast nicely with the dark humor of some situations), mapping is ok (sometimes good, in other cases just average, most of the times it's a linear path anyway) the charsets used aren't the usual ones and are all of the same style. Then there are the portraits, well they are busts and even if they are not of the same style and the facial expressions are CRUDELY DRAWN over the faces... well that contribuites to the comedy and the sillyness of the game.
It's cheesy!
It's so bad it's so good!

But ok, not everything is good here... 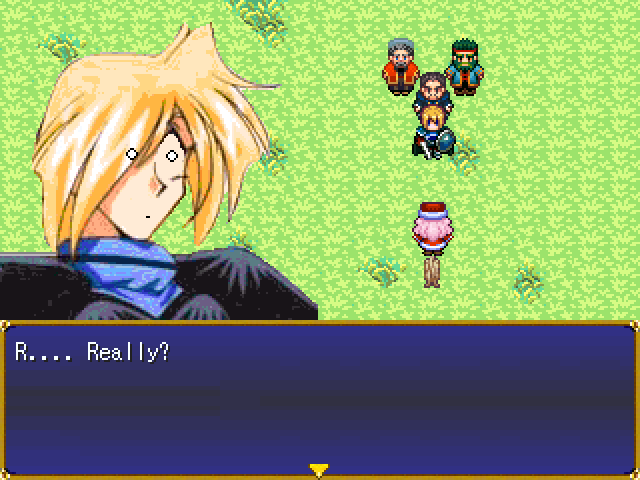 ... and the Bad!
Something is rotten in the state of Denmark!
No, I mean that there are a lot of small imperfections in this game for example on the collisions, some items you won't be able to reach due to bad mapping (hm... or maybe that was made on purpose?) sprites that suddenly disappears (the old wizard when attacks for example), invisible opponents (both in the map and in combat). Ok, that's not much and probably it's my fault that I did not have all the resource but I usually expect the games to come with all I need to play them.

Another thing I did not like is that the item used to revive characters is found a bit late. It's true that in the beginning you have a team of one character so it would be pointless, but later when the group is ready you have nothing to revive a fallen comrade. And I choose to reload.

Then there is the rough appearance of some graphics, the difference of style of some portraits and a ton of little imperfections that are not that important in my opinion, and probably if you play this as a game for... ehm let's say crass entertainment you can pass over them.

Also the story is shallow and banal, but is this really a problem when you have entertaining dialogues, nice graphics and a good soundtrack?
Hmmm let's say that this to me is the Sharknado of the Rpgmaker games I played so far: it's not made for perfection, it's made just for fun.

You have a problem with that? Don't play it!

Ok... are you still here?
Did I had fun? Oh yeah, a lot despite the little problems and the lack of polish, this game has really few stock rpgmaker resources so it's refreshing. Dialogues and chatacters are reeeeeally funny despite story being boring and full of cliches, combat is low-medium difficulty, so playing through was a breeze.
Aaaaaand since I had fun I expect great things from the sequel.