First things first, I'll need to gather stock assets to create RPG 20XX's default asset pack. It's like an RTP except "Run Time Package (RTP)" doesn't make sense here since all required assets get built into .2xg files and players of your game won't have to go download it separately. I'm organizing what I had found before with what I can find off stock asset sites, but I think maybe the RPG creation kit that was born on RMN ought to have assets from the community.

If you have assets you're willing to contribute that have lots of "Generic RPG Energy", let me know. You'll need to license them under a creative commons license so we can all use them. Don't worry about formatting, I'll convert them, just make sure they're drawn to 16x16 pixel tile scale.

The resulting asset pack will have all of the sources cited even when attribution isn't a requirement, so be sure to let me know how you want to be credited and if there's links to something you want to include.

Anything simple and easy to map with but with an appealing retro generic RPG look is great. Here's an example I made using art I found elsewhere: 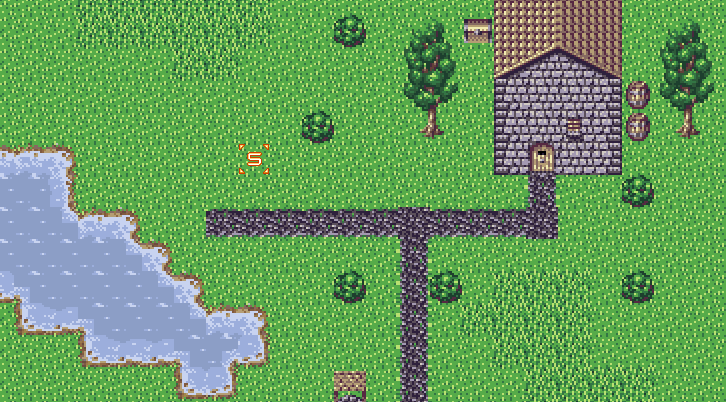 It has been roughly six years since the time I first uploaded this game page, and it was for the RPG Maker 2003 emulator of the same name. After slowing down and getting bogged down in formats and other various problems, I had cancelled and later revived this project as its own thing and it reached the point where it was "RPG-complete" missing only a default battle system since last year.

But I am curious, how many of you wish I had completed the RPG Maker 2003 emulator/enhancer from long ago instead? In this day and age, is there even any use for something like that anymore?

Please let me know what you think about this.

Change to the MIT license

I'm still busy working on LandTraveller, but since I built LandTraveller on top of the RPG20XX engine source code, I think it is fair to change the license for the engine to the MIT license. LandTraveller is your typical closed source as-is game, with all copyrights reserved. Since I was the source code's author, I was allowed to do that.

However, I feel it is fair if I change the license of the engine's source code to the MIT license:

This enables you to do the same thing now: take RPG20XX's source code, build your own game engine out of it, and then release it as your own game without worrying about providing source code or colliding with existing conditions you'll encounter in places like the Steam Store as a creator. Of course, you are still agreeing to the terms of the MIT license if you choose to do so. This isn't a replacement for reading the license (don't worry, it is a very, very short license).

I wanted to get more done with this release, but I've made some important fixes. The first ones had already been released a while ago, but there's new ones.

Along with the standard system soundtrack and the perspective mode, you can see a handful of standard event commands also being put in.

You can download this version by clicking the button up there.

I've made so many changes and some fixes that I felt like releasing them. This version includes a lot of action elements you've seen before. They're sorted into new categories Action and Collision in the script editor to prevent them cluttering up normal commands and features.

The ability to query and set character parts/colors is also here. You might have seen a screenshot of a character creator menu I posted earlier. These commands let you do just that.

A couple of things make drawing on the screen easier here. I added an Erase All command as a shortcut to wipe out all drawing objects. You can draw on more than the screen now, the On Map command will make the graphic be placed in map coordinates and will scroll according to camera.

One major change is the addition of a YOU event. This is for the commands that detect events using rays or shot projectiles. If they struck an event, the YOU event is set to that event. Commands to help you test if anyone was hit were added since some commands, like Ray, may hit the level map but not any events.

You can download the new version from the same button up there.

I've merged Enemy with Player. Now you have to specify that a Player is an enemy and then it lets you set all the Enemy properties right there. It automatically keeps up the "don't save" option, although you can turn that off for enemies that can change over the course of the game. Existing projects should load fine in the editor, but you'll have to edit the Enemy properties for the Players again (under Player this time).

The weapon animations from before are in. They took the old Enemy slot in the database. This simply lets you assign animations to sprites, and then you can assign the set to weapon items. It automatically loads the "right" and "left" animations for right and left handed swings (it uses this to correctly flip the sprite in the opposite direction but to keep the correct weapon hand). The name you give to the animations is important. These can be played on events outside battle, of course. You'll need to add another animation to the set so that it uses Normal Character Sprites too.

Most majorly, the pixel movement system is in. This upgrades the engine so that it has two event modes (character and a bunch of tiles) and two movement modes (step on tile and pixel). All types of events and all movement modes can collide cleanly with one another. The engine saves the pixel movement setting on the Player so you only need to do it once if you plan on the player moving smoothly the entire game. You only need to call the move function once (it has a Go and a Stop option). This is known as locomotion in the engine- the force that the event uses to move itself.

You can use the Force command to shove events around. This will often be done for when you knockback events after they got hit in an action RPG. You can also set a positive value for Z in the Force command to launch the events into the air. You only need to call the command once, if you do it multiple times in a row the effects add up.. if you aren't paying attention and you accidentally have a knockback Force command in a parallel event, the event will shoot off. If the event lands on the ground, it slows down based on a friction setting you can change.

Character physics like this is not as simple as it looks. You can easily lag out any game engine with collision detection. I have tested and adjusted the character physics, but it might still be quite unstable. If you play with the Ray command, but it isn't working at all like you wanted, press F9 when testing the game to see where the ray ended up.

There you go. Pixel movement. A lot of the previous commands and features do work in pixel movement, including all the commands that make a custom battle system easy. Not sure if a complete action RPG is possible, but you can give it a try. Don't go too nuts with the Ray command and try to keep them as short as possible- longer Rays are more intense on the computation.

I got this thing to work.

Instead of just pasting the weapon sprite on top of the battler, this lets you customize the use animations to anything you want. Using the same names for Directions / Attacks section lets the engine automatically play the correct animation and use the correct sprite when using equipped weapon, but you can add more if you want something like movement animations outside battle (use normal sprite instead of battler lets you do that).

Often you want the same animations but different sprites for similar weapons (different bladed weapons, etc.). Just use the parent option in the database like before.

I got this loose sprite selection working for the next version. Any sprite files you've imported (but never actually used for any reason under composite) will be automatically listed under full sprites you might have used. This was added because existing RPG Maker 2000/2003 resources are all basic full sprites.

However, a lot of existing resources have redundant palette swaps of the same characters. If you're making a serious project, I recommend converting the sprites in parts to composite parts so you can have thousands and thousands of character sprites with little effort.

You can have full sprites that are color mapped. You would need to create them under composite and then set the color map. A common use case for that would be if you have character sprites of enemy monsters that get palette swapped (gels, etc.).

I've replaced the default project with a new one. It now combines materials from LandTraveller (characters and some tiles) with the existing resources. Can have fun making your own kemonomimi now. I also changed all the stats to be similar to RPG Maker 2003's (attack, defense, magic, agility, HP and MP) with support for stat growths per level and the like. You'll have to make a new default project- your existing ones will be unchanged.

This update also includes the mouse functions and angle/rotation functions I mentioned before. Have fun making ring menus!

The equipped items altering character sprites is also here. You can change the clothes on the characters and it will update everywhere. You can also exclude some parts from being used when rolling random sprites. This is handy when you don't want something like underwear or ultra legendaries from showing up on what is supposed to be a random villager NPC or whatever.

If you take a look at the materials, you can see there aren't any battler sheets and the character sheets have additional frames at the bottom. This is the first part of a feature that lets you specify the frames all-in-one for when you're drawing your own sprites. This automatically creates battler character sets for you out of one composite part, making things less cluttered. In the case you are drawing a lot of battler frames and only have time to elaborate on the main characters, this automatic battler sprite sheet feature can be ignored.

Along with the new features, a lot of bug fixes were made. Everything should work a bit better now.

You can download the new version from the button up there as usual.

Equipped items can now show up on characters! First you associate the clothes or whatever part with a base body like above.

And then you add all the relevant parts of a particular equipment item (such as "Clothes") in the list for that item. The engine goes to each one, checks the base body, and applies all valid parts. This has the effect where, if you change your equipment, your character sprite changes too.
Pages: first 1234567891011 next last