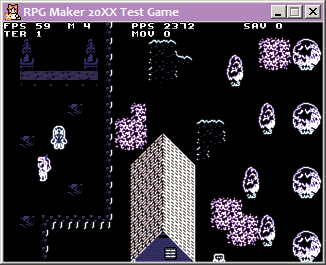 No, this is a Moonside shader

Close
07/19/2011 12:14 AM
Nah, I'll let you make those yourself. It's not really hard to do especially if you take an existing shader program and edit it. I put the link to this shader in the blog post about it, it's a tiny text file in reality.

Though it would only be pure visual, there isn't any texture sources that give you actual heat levels. I only really plan to put an HDR buffer in there if I actually write an advanced lighting system. The problem here is that not everyone runs shader model 2.0 and the map would look plain on their machines.

This shader was really just a test, in reality you would make a moonsidian chipset and use the shader to bloom the bright parts to give the neon effect seen in picture. That way without shaders the map would still look something like intended and with shaders it does much less work (much less branching) and runs faster.


More old school effects like mask waver with water (Final Fantasy 5 and 6 I think did this to water inside caves and towns) are perfect jobs to accelerate on your video card.
Pages: 1