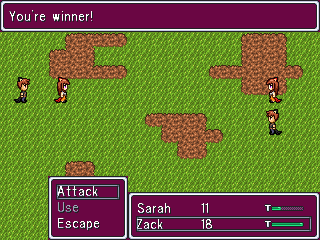 Notifications at the top. There will be a command that lets you do these too

Close
03/03/2015 01:21 PM
Will it be possible to get the talk messages during battle similarly as how they appeared in first nine FF games? Talk in a single line at the top of the screen?
WolfCoder

Notifications at the top. There will be a command that lets you do these too

Actually it's already in the last release. The default battle system isn't done yet but you can use the Show Notice command at any time. It still lets you Prepare Enemy and then Start Battle anyways. I wrote built-in help that lets you know what commands do as you click them at the left when writing events. I included any caveats or special things about the commands, too.

I guess you could try it right now by creating a parallel common event that runs only during battle (Parallel During Battle) and waits for Sarah's HP to be 0, shows "Nooooo" or something stupid like that as a notice, and then waits for it to not be 0 before letting itself repeat.

The controls are a little awkward right now, but it lets you target yourself during battle. You'll need to do that to test this since the enemy AI isn't in yet.

To do events and dialog during battle, realize only the event that called Start Battle is halted. The map is still running (and visible if you had transparent parts of the battle background).
Pages: 1