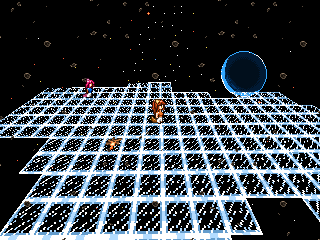 Testing the perspective mode out a bit

EDIT: I seemed to have failed to notice that LandTraveller uses this same engine...!
WolfCoder

Close
08/12/2015 12:21 AM
If I wanted to do walls, I'd just go full 3D block land like the old LandTraveller 3D prototype. This would require a special block editor so it would be easy for anyone to make 3D blocks. Developing such a thing (well) would take a ton of time, so it is a distant future mode of RPG20XX.

EDIT: I seemed to have failed to notice that LandTraveller uses this same engine...!

LandTraveller uses a heavily modified closed-source version of RPG20XX, and is going back to the 3D to 2D isometric block world thing. LandTraveller cannot be made with any existing engine except one made especially for the game, but all the framework from RPG20XX comes in handy.

Stuff like the advanced lighting engine and all that may be ported back to RPG20XX standard because it is awesome.

You can try the public alpha demo of LandTraveller here: http://steamcommunity.com/groups/landtrav#announcements/detail/795235381340595399

It's like the early access to Early Access so you can demo before you demo. I'm a long way from Greenlight, but I want to have already proven that this is a real game and if you're going to like the idea or not.