This time I decided to review one of the first games I played. At the time I was still oblivious of this site, in fact I played the original release in french (despite having a limited grasp of the language, but ehm... ok).
Now I decided to re-play the english version.

Omega Cerberus is just a demo, the story is unfortunately incomplete and in my opinion it's a shame, since it's quite interesting: we play as Captain Actea, the daughter of a commander of a spaceship that travels the galaxy looking for resources. So, yes, this is a space-opera, and despite the use of many names that are related to a certain videogame ("Cerberus", "Nero", etc...) this adventure is quite original. 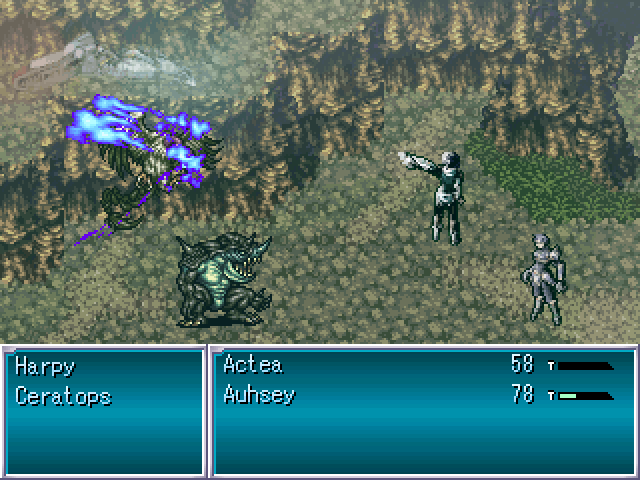 Take this foul beast! In the face!

But wait! The best parts of this game are the resources and how these are used: I found music really appropriate and evocative, it really helps to estabilish the atmosphere of the setting, that is masterfully illustrated with lots of details and effects, from lights to mist. Nothing is out of place, mapping is good, but what I really impressed me is the coherence of the locations and the world created by the author. Despite mixing sprites from different sources, like the charsets from First Seed Material and the chipsets from Albion (and old great classic futuristic rpg) they merge perfectly due to the use of colors that depict a dark world.

Ok, so what's wrong here besides the fact that this is an incomplete game?
Well, let's say that the gameplay is just ok. Combat is rather dull an not really interesting: both our two protagonists have just healing skills and base attacks, there are few items to be found or bought and most of them are the usual consumables like potions, phoenix ̶f̶e̶a̶t̶h̶e̶r̶s̶ tails, antidotes and a couple of weapons. Nothing much. You earn also a couple of skills but probably this will happen at the end of the demo, so no chance to use them. Pity. I also wasn't a big fan of the battlers and some enemy sprites because they look blurred, unlike the rest, including other monsters, that look well defined, and it's a pity, since the attack animations are quite nice.
Random encounters and save points did not bother me since these were well dosed and also the difficulty is balanced, still combat is dull and a bit boring.

Then there is also the fact that there are some untranslated parts, not to mention that I'm pretty sure that someone would be bored by the looong cutscenes of this game. Unfortunately this is a problem that I can excuse since this was supposed to be the beginning of the story and had to introduce the main character and setting. In fact a lot is revealed of both Actea and Nero, the main bad guy, while also leaving many questions about them and the other characters. 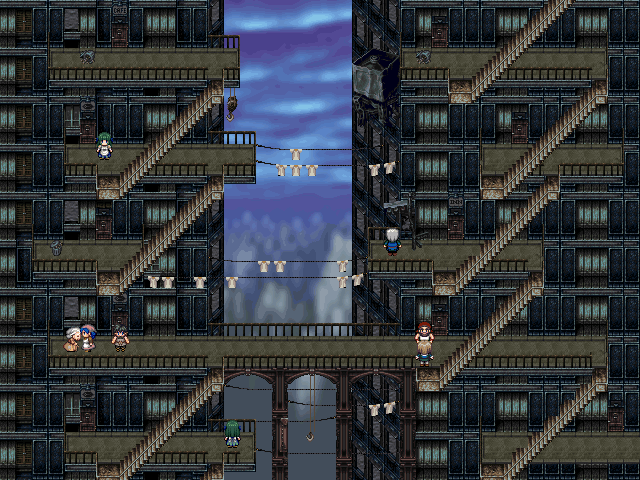 This is one of my favourite maps EVER. And it is used just for a short scene!

Verdict
Omega Cerberus is a game with a great visual style, a nice story and a mediocre gameplay, but there is nothing really bad, except maybe that this is a game that was never completed and left me wondering how was going to end the story, because there are some interesting hints and ideas. Anyway we'll never know!
But I still appreciate the atmosphere and maps of this rough gem, a lot. Personally I'd use this style as inspiration if I had to make a sci-fi or post-apocalyptic game. Not bad at all, 3.5!

Close
03/23/2020 10:34 AM
Congrats on 100 reviews addict! Here's to many more. And you're right, that's an absolutely gorgeous map. It's a shame this one didn't see completion, but I guess what happened to Ara Fell is always a possibility.
TheRpgmakerAddict

author=Frogge
Congrats on 100 reviews addict! Here's to many more.

Thanks Frogge! I am very happy since I found difficult to do the same activity for a long time, even if something that I like doing. Well anyway I won't stop now for sure.

author=Frogge
And you're right, that's an absolutely gorgeous map. It's a shame this one didn't see completion.

It's really a pity, anyway it's a common problem with ambitious free projects, but least it was translated, I know other really nice games (even complete ones) that are really good but sadly untranslated... I even tried but... see my low concentration problem above ^^'
Pages: 1