Take Down: Narwhal of Doom

Hello!
I didn't know that Take Down was a serie anyway I decided to try this game, since it was already reviewed and... I've never played it.
Ok, let's say it clearly: this game is weird! No, more, it's WEIRD.

We start as a guy named Gus (even if you can change his name) that wakes up inside a closed room. You can explore the surroundings, save, interact but as soon as you read the diary...
...
..
.
..
..
... you wake up as a different character in the same room! No, wait some things are changed, some object were moved, but it's clearly the same room. And this will happen every time you read the diary, as a never ending nightmare. Each time a different character. Including Winnie the Pooh, no really!
Until... until you find a way to break this curse, but I won't tell you anything about what will happen. It's half of the fun.

The game itself is really simple, it's a sort of "escape room" (with changing characters, that's it)even if you won't understand much of the whole story or maybe I'm just confused (well the ending will explain something... but I cannot tell you, of course!). A lot. Maybe... or maybe the whole adventure has no sense at all. Well try it yourself, and let me know. 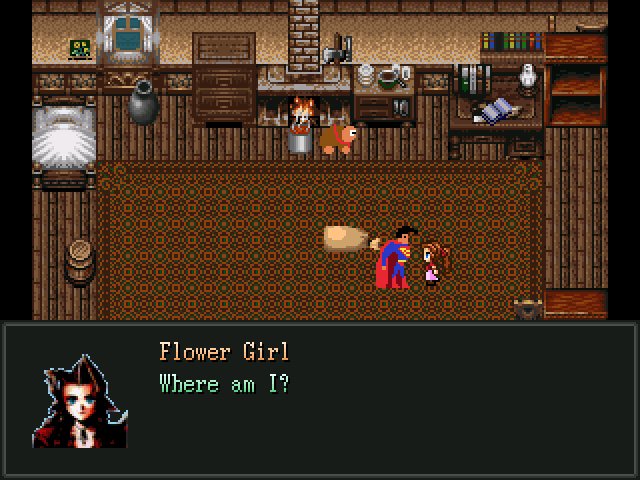 Oh Aerith! But I guess this isn't the FFVII remake I was waiting for...

Graphically the game uses a mish mash of different styled sprites, charsets, chipsets, there is some coherence but most of the game is a surreal dream that sees Superman interacting with Aerith Gainsborough, Gizmo (yes, the Mogwai from the movie Gremlins) meeting Kevin McCallister...
Everything is done clearly on purpouse but there are some bugs and clipping issues that are clearly mapping errors since you can walk through some chairs and other pieces of furnitures in some versions of the map.

Sounds are weird and hilarious, I also liked the music. It's bizarre so do not expect anything coherent or that make sense. No, not a chance.

Verdict
Despite the little clipping errors and weirdness of this little game (that I assume it was made in a really short time) I liked the dreamlike concept and silly situations and dialogues. It's clearly different from many of the other games I played. There's not much else to say about this game (that is set on just one single map even if with some modifications here and there) except that it's easily solved by interacting with everything and fighting a simple final battle.

The concept is clever and the realization is so-so, in the end this is still an ok game for the entertainment point of view, so this earns a 3/5.