Tribal stance is an unfinished RM2K3 strategic game where the goal is to build up a village and a militia and use those resources and troops to conquer and subjugate neighbouring villages and add their resources to your own in order to eventually take over the world. It's basically totalitarian regime builder 101, and for that reason if no other the fact it was never finished should be considered a blessing. 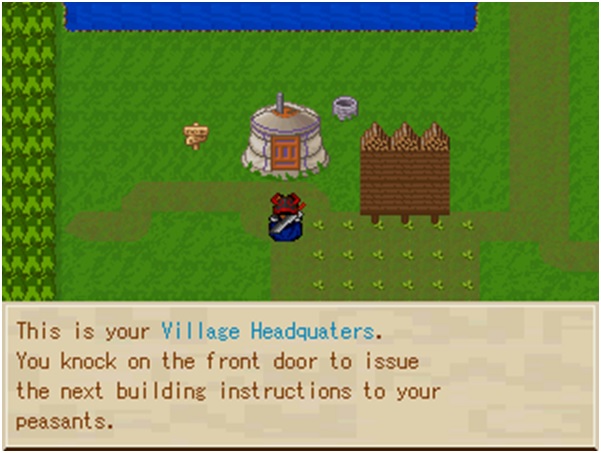 Your invisible, lazy and illiterate peasants that is.

Actually the game isn't what it says on the tin, it's not strategic in the slightest, and it's barely even resource management. Though to be fair to the designer they didn't claim it was resource management, but the description leaves precious few other terms that could be applied as the the game genre. You don't have poor overworked underfed peasants toiling in the fields, woodlands and mines, you've got you, the heavily armoured, sword carrying overlord running back and forth from the iron mines, clay pit and forest to collect resources to build and upgrade your village. As far as those pesky peasants go, they are nowhere to be seen. That or they are hiding out in the fortified town hall from your understandable and one imagines legendary wrath. I mean really what are these villagers thinking, slacking off and not actually out there collecting the resources for your burgeoning empire? How are you supposed to take over the world if you have to cart all the suppliers around the countryside like a common peon? 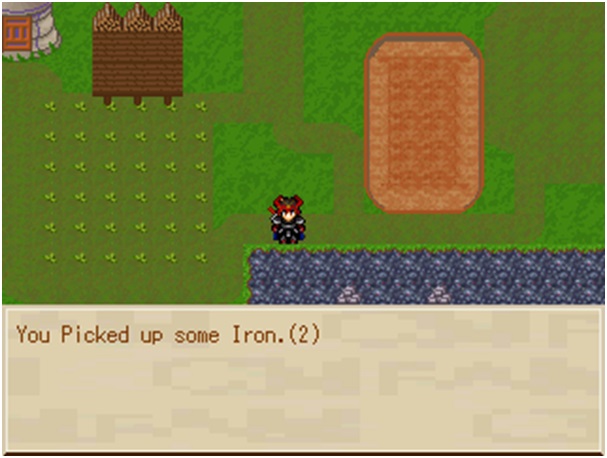 So after an interminable time running back and forth collecting meagre amounts of supplies per trip you've finally earned enough to upgrade something, which has to be the warehouse, since if you don't upgrade that you're never going to have the room to store enough resources to upgrade anything else. Though you are not told that at any point, there is no warning message saying 'your warehouse is full' or 'Cannot accept resources, upgrade your warehouse'. You just work it out by checking your resource 'bucket' and seeing nothing you are collecting beyond a fixed amount is showing up. So upgrade to the warehouse goes first and we're back to another trek through the village collecting clay, wood and iron to upgrade the next building.

Did you notice a glaring omission in that list? Food perhaps? You do have a farm, but it appears collecting food isn't important until such time as you build a barracks for your newly minted army. Though where you are going to source these fine strapping members of the community to fill the ranks is beyond me as you don't seem to be collecting any food to feed the peasants, let alone yourself. So they'll probably all die of starvation before you get around to ordering them to build a barracks. That may explain why it is they aren't out on the fields toiling away for you, they're all conserving their meagre strength, that or the town hall has actually become a charnel house, and you are simply issuing orders to no-one like the fine madman in training you are.

So you finally get around to upgrading one of your resource centres, and suddenly the resources are flowing in, from a meagre 2 items of clay, wood or iron you are now hefting a whopping 32 items. Which tells me that you at least have been eating your greens, since there is no way you could suddenly be capable of carrying a 16 fold increase without some form of sustenance. 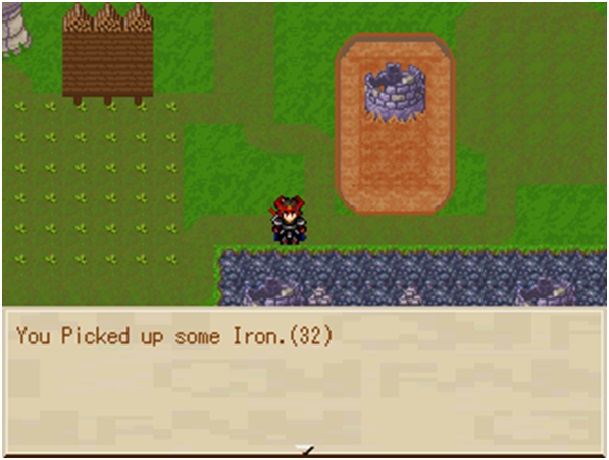 Now you're cooking with gas.

So you continue on in this monotonous fashion, collecting resources and building up your town and occasionally getting raided by a neighbouring warlord who seems to be unstoppable as there is no way to prevent him from raiding your resource bucket and taking whatever her wants. This, naturally, sets you back to running around again. It's not a very sensible system for introducing conflict or difficulty and is unbelievably repetitive and completely pointless as there is no way to defeat this random enemy until you take over his town; which given the number of defences you can muster and how long it takes you to construct a single unit of spearmen (the cheapest combat unit you can train), I calculate would be approx 13 hours of game play. Trust me when I say I didn't give this game that long. Not to mention the fact there is NO save option available, so you'd have to play continuously, though since there is no exit option available either, not even the trusty F12 that may be what the designer was going for. Not a likely scenario in a game I enjoyed, a statistical impossibility in this one. 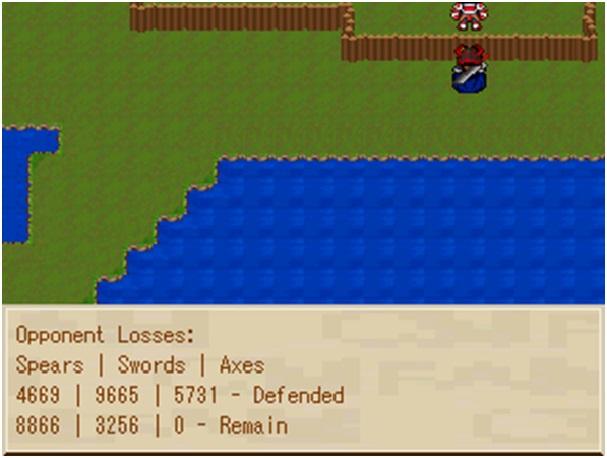 In addition to all the other issues some of the upgrades are problematic; the designer obviously didn't go back over their work to make sure that it was a logical progression for upgrade levels. For example the resource jump from level one to two of the farm takes 32 portions each of wood, iron & clay, from two to three takes 128 and from three to four takes 6561! Suffice to say, my farm never made it to level four.

In the end, well actually not the end, since after I'd founded my second village and seen it was simply a repetition of the first I gave up, this game is simply woeful. It's repetitive, uninspired, badly designed and completely unbalanced with inappropriate musical themes and terrible game mechanics.

Close
08/14/2014 02:24 AM
It seems a shame, since I usually enjoy games like this. But when there's glaring design errors that cause gameplay cycles to be unfun and really repetitive, then that just makes me sad :(

Oh well, nice review though. Thanks for warning me ;)
nhubi

Close
08/14/2014 04:25 AM
Hey Cash, me too, I'm a bit of a fan of the resource/time management type games so I wanted to see what could be done in the RM engine, but this isn't fun at all. Glad I could help in the winnowing process, since it's not worth taking the time on this one.

Close
01/07/2015 07:12 PM
Actually, if this review was based on the most recent version of the game. Then your calculation is way off. You can completely max out everything in your first town within two hours.

You just have to know how to take advantage of certain systems in order to pull it off. The more nauseating issue for me is that there is nothing to do once you've completed that town since your are completely unable to upgrade the two towns you can conquer since you have to spend 16 of each resource to upgrade the warehouses in those villages while only being able to hold 15 of each resource. It's the sort of mistake that leaves you scratching your head.

Also it is possible to save in this game, but to do so you need to build a smithy.

Though, I don't really disagree with your overall opinion since this game is a mess.
The_Minuteman
40

Close
05/02/2015 02:28 AM
The monotony of this game aside, the music is what I found to be most annoying. It plays like a broken iPod that just randomly switches songs on a mere whim.
Dark Chaos
66

Close
05/21/2015 03:38 PM
Loved the review! This game was made when I was 14, eight years ago. It's not fun to play, but it had some good things, mostly the sheer amount of committment to making it sort of work. You would not believe the amount of variables it needed!

So, basically, yep, everything totally deserved and I was thoroughly amused!
nhubi