Story: I have never played Spelunky, but from what I've seen on Youtube, it seems to be a game that takes the idea of dungeon crawling, cave exploration, mining, and treasure hunting, and puts them all in a platformer. In the true art of the early video game, there is no story. There is just a goal, an enemy, and the way to get from start to finish. Crowded Spelunky was, I believe, intended to be a mod. I know little about Spelunky itself, so bear that in mind as you read this review.

Gameplay: As a platformer, this is very well done. If this is anything like what regular Spelunky is, then Spelunky seems like an amazing game. It's way over the difficulty level I personally like to play with so it's not a game I'd play under ordinary circumstances, in any case. According to the gamepage, this version of Spelunky is four times harder than the regular version, so that seems intentional. I spent about two hours playing this. Enough to know that in spite of the fact that it's stupidly hard, you can get through this version of the game. The game isn't too hard to be playable, but it is too hard for a casual gamer to really enjoy. Overall, I found the game charming and likable, but a bit too frustrating for me.

The tunnels seem to be procedurally generated. There are a variety of enemies, treasures and traps to navigate. You have your standard weapon; a whip, you can wall cling, jump, and you can cast rope to the ceiling, provided the ceiling is visible. You can also use that rope as a weapon to deal with hovering enemies. You also have bombs that can be used as weapons, but are much more effective as digging implements, and you'll need to dig to get to places you want to go. There are occasionally NPCs calling for help, though with the few I found, I was never able to figure out what they needed or how to resolve their problem. Hits will temporally stun you. Falling from height will also reduce life. There are also springs that can help to get places, avoid enemies, or can fling you into enemies and traps.

What I absolutely adore: the title screen is playable and you have to enter a door to start the game instead of just being thrown into the game. You have enemies you can wail on in the title screen until you figure out the controls. 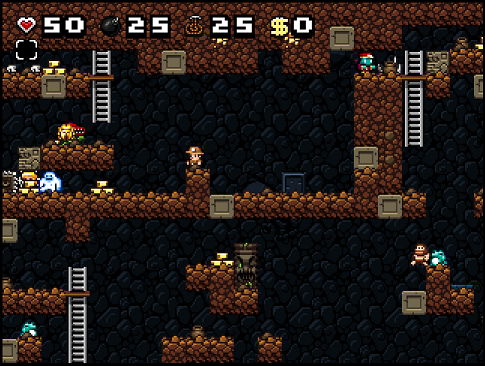 "You call this 'archaeology'?"


Graphics: Very simple side-scrolling platforming. These graphics are clearly from the real game, itself. I'm sure the dev has made fine use of them. From here, the whole thing looks really good.

Sound: The music is epic, and I'm sure it's also from the regular game. The sound effects are also used well. All in all, from what I've seen on Youtube, the dev has done a fine job of duplicating the original game.

Conclusion: The dev doesn't seem too happy with this game, and I'm not altogether sure why. It plays just fine. It's as hard as he wanted it to be. It would be fun for a hardcore gamer, and I certainly recommend it for such. I cannot, however, recommend it for a casual gamer. The difficulty level is much to high for casual gaming, and such gamers will probably find the game more frustrating than enjoyable. Still, it's good, and I don't see what the issue is. Maybe it's because I don't know anything about Spelunky. I'm rating conservatively. The game may be well done, but it was made as a derivative. If what the dev has described is true, then the only thing this really adds to the Spelunky experience is a cranked up difficulty level.

Close
02/17/2019 05:44 PM
Wow, that was very merciful review for a very merciless game! I guess the trouble with this particular mod isn't outright apparent when you aren't familiar with the original game. Allow me to elaborate...

What I changed to make this mod was fairly simple, but it makes a big difference. You see, the game has four different zones that are randomly generated, as you guessed. Each zone features its own monsters and traps. The level generation script checks which zone you're in before populating it with the correct stuff. I made it so the game loads all four zones worth of stuff in every stage (hence, four times harder).

The obvious effect is that the caves get crowded (title drop!) because there are four times as many enemies and traps as there should be. Normally, the game has you face these challenges individually so you can learn to deal with each one in turn. This game throws all of it at you, all at once, in a very hectic environment. It's a fun mess if you know what you're doing, but as you saw, it can be very frustrating if you don't.

I counterbalanced this by giving the player 50 HP and 25 of each resource. To put this in perspective, the normal game starts you with just 4 of everything. This game is higher risk and reward than the original, but the implementation is a little whack. It's beatable, though. I replayed it after I saw it on the bounty list, and was able to clear it within a few tries (but I also know exactly what I'm doing).

One change I want to make is a "crowding multiplier." Basically, the player chooses x1, x2, x3, or x4. The highest option would be the game like it is now. The lowest would have the normal amount of traps/enemies in each stage, but any type of monster could still appear in any area. I also need to fix some weird interactions between enemies that aren't normally in the same level, like how man-eating plants only eat cavemen, or how UFOs don't care if they get thwomp'd.

Anyway, thanks for the review! I was sure this would get a low score for being so unfriendly to new players, so this was a pleasant surprise!
Frogge

Close
02/18/2019 05:02 PM
I’ll save you the pain, yes, Spelunky is a brutally hard game even without the crowds. The furthest I’ve ever gotten was the fourth area in one of my over 200 playthroughs. Got the third three to four times at most. Died on the fourth area’s first level.


Maybe I’ll play this to see how a larger amount of enemies changes it up.
Pages: 1