Rework The Dead: Evil is an oddly (but not too much!) named game made by Beaker using Sphere. This game was released around 2011, and it's just one of the many games made by this developer with Sphere, all of them complete! Yay! BUT this looked more badass from the pics, so this was my first choice (the others will wait at least a bit... for now!).

Yes, this time I'm not going to review a jrpg, a puzzle game or an adventure, but a shooter! And it's a really classic but inspired sideview run and gun game with lots of gund and blood! Wow! Impressive, I mean there are also cutscenes that illustrate the story, even if I know, this is totally unnecessary since we're here to unload torrents of lead on ugly monsters. Nah I was joking it's good that there is some story and that's illustrated so well. Show, do not tell! 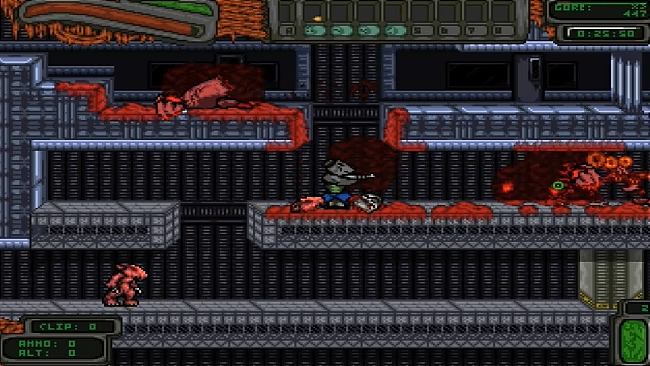 Anyway I forgot to mention an important feature of this game: this is a modern styled pc shooter that takes full advantage of using mouse (for aiming/shooting/switching guns of course) and keyboard. Unlike the old shooter games like Contra or Turrican that had limited shooting directions, this game is like the more modern ones like Thing-thing, Butcher or My Friend Pedro, where you can walk backwards and shoot as you run away, or you can shoot from a vantage point the enemies below (I have the high ground! Ehmm). I remember playing an old game that used the some sistem in 90s or 2000, it was a demo but the setting and game was really similar to this one. Pity I cannot remember the name, I just recall that the protagonist was a cyborg.

Well, here it is not the same!
But still this game has lot of character, the design of the monsters and of the main character is really cool, there are also different weapons and locations. And the game is violent, explosions, blood and everything! And guess what? This game has a great atmosphere, dark and claustrophobic, that is also enforced by a good use of music, creepy themes and fast paced techno tracks, ideal for a gritty game where you shoot monsters. One lone soldier against a horde of abominations. 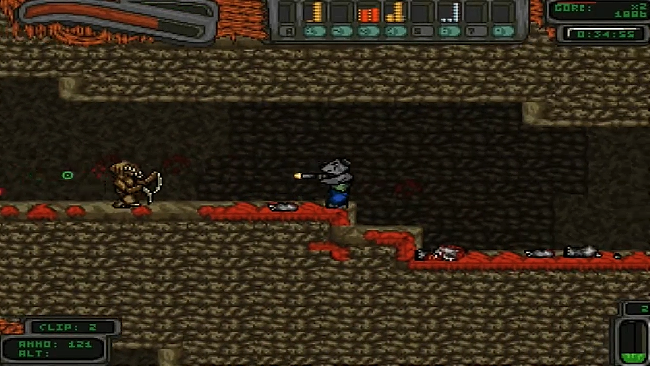 When you are severely wounded it's easy to go from predator to prey!

Does this sounds challenging? Well it is, I mean, it's a fast paced game, only downside is that the character is wounded by some apparently not too dangerous jumps... but uhm ok, it's the only real complaint I can make since for the rest it's simply good, from the controls to the arcade feeling and also the physics: the granades bounce around, you can run, jump, and well, for sure this is a sidescrolling shooter done right and probably one of the few available here. But why you need other games if this one is so good?

Ok, clearly the plot is not deep (why we play as a furry soldier fighting monstrous furries? Uhm ok nevermind! Let's shoot monsters and have fun!), but hey this is not an adventure or an exploration game, it's just a game that seems to mimic those old school shooters with cool and colorful pixel art, horrible monsters and a touch of horror/gore that's never out of place (see also the interface, the hud... very arcade isn't it?). What else? Nah, that's all I guess. 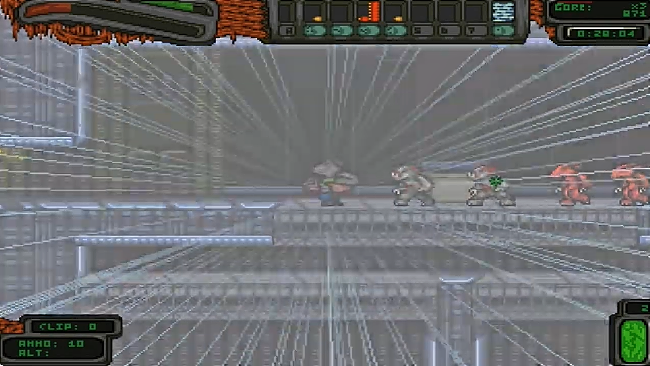 WHAT IS GOING ON? I don't know I swear! Now, before it's too late read the...

Final Verdict
A platformer game with tones of blood? One where you can aim and shoot using the mouse? That uses an energy bar and not these annoying lives? It's yes to all three questions. Yes, but this game has also character and style, and if you like shooter, this is a must play. Ok, not perfect, but almost perfect. Ok, I mean I guess that we cannot discuss a lot about this game since it's nothing that can be described... BUT it can be played and for free! So try it, now! See ya!