Here there are vampires!

No wait, I was mistaken. Let's start again:

Calunio was the dev of the month, so why not play one of his older games? Vampiros is what I'm going to review today!
I admit I played really few Rmk games about vampires... I remember only the german Vampires Dawn and its sequels and the parody game.

The premise is rather simple: our hero and alter ego Alef is a high ranking vampire that wants to learn the origins of his race. In this quest for knowledge he is supporter first by a vampire scholar named Calunio (!) and then by others he will meet during his search. Enemies? Lots of them, from random encounters to bosses, not to mention a recurring rival.

So how is this game? I am almost sure it's one of the first he made, but despite being rather simple and linear, the game is pleasant and entertaining. 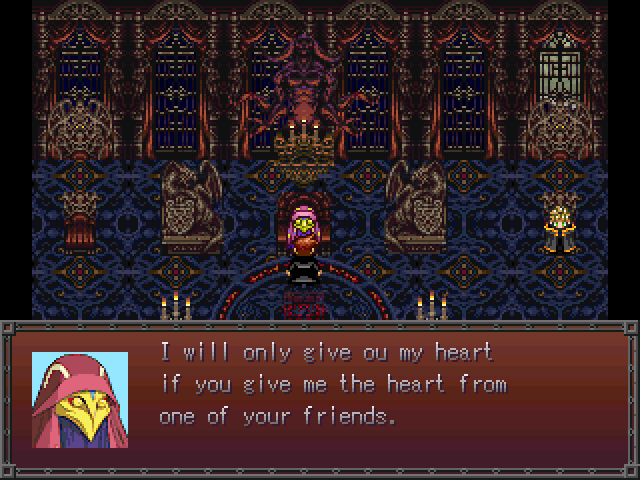 Last Christmas you gave me your heart... (ok I found just the typo you can see in pic. But this slightly asymmetrical room unnerves me!)

Goodies
Let's start with graphics: most sprites and assets are rtp but there are some edits too. They are used well and the same is for the music (I especially liked the themes of the title and the one of the first dungeon, both really unnerving and creepy! Not to mention the clock sounds, widely used during the game).
Mapping is not too bad, simple and serviceable, but it doesn't lack little details that prevents the bare bones appearance (but Lillith's cathedral exterior is great). Dungeons are quite small, and I think this is a good thing!

Combat? Yep, and lots of it! The layout and gameplay is nothing new, usual first person view with no battlers; characters have different special abilities that need energy to be used. Alef is a typical warrior with some added abilities, Calunio is a sort of mage with weak attacks and some nice spells including healing... and so on.

Ok, this game is light years away from the great Alvorada do Mal, still Calunio was able to create a very nice adventure with few (and not so exciting) resources.
How? By adding interesting content, details and providing an enjoyable and varied gameplay, for example:

+ One ally is a strong fighter but we never control him.
+ The annying angels/demone that can switch form and sometimes heal and resurrect fallen allies.
+ The characters are revived and healed after each scene, immediately after the last important fight (and this is a really nice feature! Oh the regenerative powers of the vampires!).
+ You can save anytime, anywhere.
+ You do not use healing potions to heal, but blood packs (but strangely these vampires sleep on comfortable beds, not inside coffins!).
+ The starting tutorial at the vampire university (useful to get some items and experience, it is also updated when revisiting the university!).
+ The puzzle after the first boss with the infinite room.

These are all little clever ideas and details that make the game interesting and not boring or frustrating at all. Difficulty is also well balanced (in my opinion much more than in Alvorada do Mal). Mobs and random encounters are easy while bosses are more challenging, but the game is never too difficult. 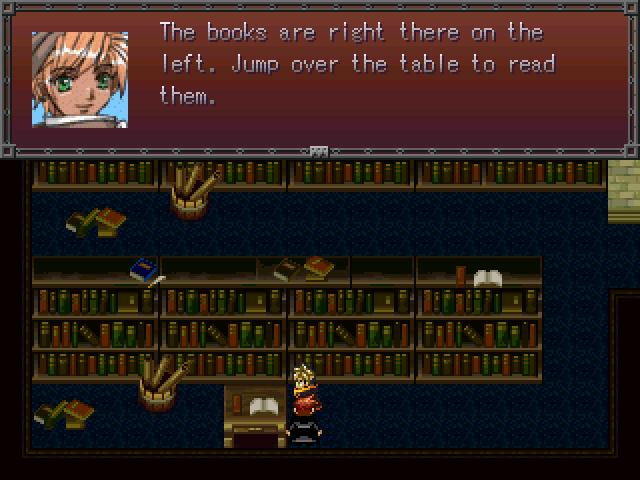 Hmmmm... ok, but was this athletic exercise really necessary, Calunio?

Some flaws?
Ok, for example one problem is that few abilities are useful, while others are really forgettable (the healing spell is really not very effective and it's useful only outside of combat, healing items are really better. Lullaby instead is quite powerful, but the vorpal sword that causes confusion is overpowered! Use it!)

Then there is the library part: as I said before all characters are revived and healed after each "scene". At a certain point the helpful vampiress tells us that her cat can heal our wounds. Sounds great! Well... no, it isn't because the next part has "combat-checkpoints". You fight each time you go though a passage, and this happens NO matter of the direction. So the little First Aid Cat is useless.

Another odd part is that the second boss sometimes focuses his attacks on the vampiress since she was her disciple. This is a nice feature, the fact is that the vampiress keeps being attacked by the boss EVEN when already dead (ok it's a vampire so she's technically dead from the start. I mean that the boss attacks, kills her and then keeps attacking her once every three rounds! It's silly but hilarious!)

Also story is quite short and simple, dialogues are... uhm ok but sometimes weird, when the game doesn't take itself seriously (an undead lion answering with a smile emoticon? Jump over the table to read the books? Really?), and that's exactly how you should approach this game: as a sort of comedy-horror adventure.
I also think that the friendship with Calunio is really well told (the flashback is perfect also for the choice of music), but it's not the same for the love interest (in fact many details aren't explained or clarified at all).

A last problem is that the level cap is 10, so you cannot improved after reaching that point. While this makes grinding useless, it also gives some problems during the last three boss fights, considering that you will be alone (to tell the truth for the first two you have the undead lion, but he can't be controlled) and you cannot elaborate any kind of real strategy besides using the final attack once to soften the opposition and attack with the deadly vorpal sword!

I vant to suck your blood!
This game is, as I said before, a little horror adventure. Story is not that bad, gameplay is balanced and there are even some dialogue choices (that unfortunately don't make any real difference, I noticed). I also wonder if the Bloodsuck ability you get near the end is useful or not, anyway the important thing is that I had fun and I played this from the beginning to the end.

Close
12/30/2019 04:24 PM
Very nice to see this game being played after so much time! If I'm not mistaken, this game is like... 17 years old. So yeah, I recognize many of the flaws you mentioned. And coincidence or not, this is a christmas game, since I made it as a Christmas gift to a friend.

Thank you for the review!
TheRpgmakerAddict

author=calunio
Very nice to see this game being played after so much time! If I'm not mistaken, this game is like... 17 years old. So yeah, I recognize many of the flaws you mentioned. And coincidence or not, this is a christmas game, since I made it as a Christmas gift to a friend.

Thank you for the review!

Well I saw this only recently (unlike Alvorada do Mal that I found on some site years ago!) so I gave a try!
It surely was made in a short time then! Well I'd need at least 17 years to make something similar, with the flaws included! -_-'
But hey it was a nice game with a balanced gameplay and dungeons that aren't boring at all. So good job!
Pages: 1