1 reviews
Save to Dropbox
A dreaded warlord who died sixty years ago rises from its grave thanks to the efforts of the necromancer Damian. It now must seek its nine artifacts, scattered across the world, to regain its power and free itself from the domination of the necromancer.

The game is an attempt to create a highly nonlinear experience while still maintaining a story-heavy focus. Each of the nine artifacts can be retrieved in any order. The scenarios surrounding each artifact evolve both as time goes on and based on your own actions elsewhere. Each of the twenty-five party members have their own distinct set of skills, personality, and personal goals. Recruiting one may cause others to despise you. Your current party members will contribute deeply to the events unfolding in front of you, and have their own unique detailed dialogue. Your actions and your words ultimately determine how the world views you; a forgotten pinnacle of justice, a sinner seeking redemption, a rogue spirit acting on its own whims, a tyrannical abomination bent on world domination, or something entirely else.

Features:
-A nonlinear, open-ended game with a focus on story and characterization.
-The world and remaining dungeons radically change based on your decisions, actions, and inactions.
-Recruit twenty-five different party members, each with their own personality and specialties.
-Unique strategy-oriented Battle System (that STILL isn't quite 100% finished yet.)
-Determined Encounter system allows you to steadily progress through a region and lessen its monsters.
-Day/Night system with dynamic NPCs that have their own routines.
-Everything culminates; even sidequests have an effect on the world, though you may not immediately see it.
-Essentially everything (sans some music) is custom and was personally made from the ground up.

I know I intended to take a bit of a break from DR for other projects (was looking into doing written LPs of other RMN games), but a couple issues needed immediate redressing. That in turn spilled over into other concerns, and what was going to be a tiny patch turned in a fair sizable update that should've honestly been out a month ago. Exact plans going forward are still hazy, but more balance is given priority on added new content. 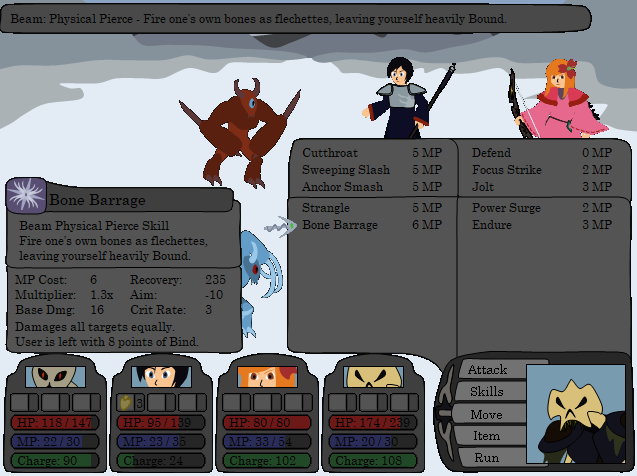 I think the most visible change is that spells and skills now get a nice little window in battle, showing all the previously hidden aspects of them. This should hopefully make spells more memorable and distinctive, and also motivate more spending on spell tomes. Beyond that, it primarily deals with earlygame issues and lightening up that early difficulty. Things like lowered Slash/Pierce/Bash resilience, increased experience and money drops, and high-prominence items being lowered in price. A lot of spells got tweaked in a lot of little ways, as well.

Unlike most other version updates, transferring of data is NOT possible between 0.9.0 and 0.9.1 due to a filepath change (done because there were issues of complete filenames going over 128 characters).

To keep this brief and a bit less redundant, the precise changes are noted on the download file.
Every game needs a volcano level, no matter how impractical it might be.

The Ice Caves consists of several floors, wrapping around a central pillar. Earlier floors can be seen below.

You can reorder the party at any time. Whoever's in the front slot walks around on the map.

Field spells hit everyone except their caster. Monsters aren't afraid to roast their own allies. Close
06/25/2011 04:17 PM
See, there is a reason we added RPG Toolkit as a supported maker. Good to have you here. I'm not as familiar with the new versions of RPG Toolkit but I've toyed around with the older versions dating back to its second release.
WolfCoder

As for the Toolkit itself, it's pretty much been in decline ever since the jump to TK3. Though, to be honest, not that much ever changed. Regardless, ever since then, most people have been in the habit of simply putting off doing any work until the next update. There's also the fact that the default menu and battle system went from bad to completely unusable, meaning everyone has to do a lot of hard programming. Furthermore, rips are abhorred, so every project pretty much is built from the ground up. That's probably a good thing in its own way, but makes it horribly unfriendly to new users. It's currently at 3.1, developed by Colin Fitzpatrick (of ShoddyBattle fame) and Delano, both who pretty much left wholesale after completing it. That was about 2007. Since then, it's stayed there until recently, as a single member is trying to completely redesign the thing, making it incompatible with previous versions. It's not finished yet, but I can feel it's going to create a schism, which, again, is largely my reason for moving here ahead of time.

The entirety of the Toolkit sees maybe one or two releases a year, with maybe a couple of demos on the side. Most of which aren't RPGs at all, but cute little puzzle games or platformers made using the engine. Most of which are made by the same person (Grindalf). So it's not exactly bustling. There's still a community of sorts around, but very few actually use the Toolkit in any way.

As for why I use it, well, I suppose it's largely due to finding it first and getting entrenched in it. At some point in time, it was certainly more flexible than RPGMaker, but I doubt that's entirely true nowadays. I've wondered a number of times if I shouldn't find a program that actually has a future ahead of itself, but it'd be too much of a pain to change now.
Dyhalto

Close
06/25/2011 09:41 PM
Well, worry less about the maker behind the game and focus on creation of the game itself. If your game is good enough, it might inadvertently create more interest in the maker or propel the developers to improve further.
Besides. I want to play an interesting looking game. Not try an RPGToolkit demo.
Dyhalto

I'm getting a glitch at the camp though :(. I'm in the main outdoor area and the only place I can go is inside the weapon shop (can't seem to buy anything). Every time I try to go somewhere else, I get "RPGCode Error Line 0 : Syntax Error". Maybe the error is telling me I do need the Toolkit.

Beside that, I'm really digging the atmosphere :D
Acra

Close
11/09/2011 04:36 AM
I've heard of this problem before. It usually happens if the install folder is too deeply nested or something. If the full filename for a program is too long (I THINK 128 characters), it'll just cut it off midway and end up doing nothing. Try moving the whole folder up a few levels. That should fix the problem.

The one other tester I've heard from said something about the rat in the very first encounter being utterly unkillable (more precisely, saying it was taking damage, but never actually dying, and was apparently unable to see its health at the top) but not on subsequent battles or attempts to re-create the issue. I think it might be some kind of cache-related oversight of mine. Did you experience something like that?

Yeah, I've never gotten around to designing the inventory, so there's no shop system, either. There's probably other obvious things missing that I should have mentioned, but after nearly two years of them not being finished, you tend to forget about it. >_>

One thing I may have forgotten to mention is that the Toolkit is known to HATE operating systems that aren't XP. How exactly this tends to factor in, I don't know. But just a fair warning. Apparently, running as administrator in compatibility mode helps.
sixe
43

author=psy_wombats
I always like that games that have a unique visual style.

Close
11/16/2011 11:38 PM
Speaking of that, my former musician told me I can go fuck myself and that whatever I release isn't even worth opening. But it's not like he hasn't been relentlessly criticizing everything I do since, like, forever. I still for the life of me don't know why he even did any music at all, let alone four of them. ...Probably as a way to show off.

So, um, if anyone is volunteering to do music for me (and I guess sound effects), I'd be greatly thankful. I don't expect for a single second to get anyone, but figure I may as well ask while I'm on about it.

EDIT: I should probably also mention that I'm working on fixing some of the more glaring holes that are around in this version, as well as a few additions (mostly making the battle system not so completely bland). I admittedly put it up a bit earlier than I'm comfortable with. In part because someone asked to see it now (and then changed their minds and said they didn't care anymore), in part because I was too sick of bug testing myself, and lastly because I figured it would slip by unnoticed. Now that I'm on the frontpage again, I'm a bit flustered by these issues, and am working on it as quickly as I can. It'll probably be another week or two before I put some kind of patch up, though; hopefully, I'll have some feedback by then to considering tweaking for.
sixe
43

Close
11/24/2011 02:40 PM
Okay, so, apparently, on RMN, I've gotten over 150 downloads in the past two or so days. Yet, when I check the file itself on MediaFire, I can see that it's still floating around 60 actual downloads (about a dozen of which I know didn't originate from here). Who's lame idea of a joke is this?
sixe
43

also get on irc sometime we(i) misd you
TehGuy

author=Acra
Okay, so, apparently, on RMN, I've gotten over 150 downloads in the past two or so days. Yet, when I check the file itself on MediaFire, I can see that it's still floating around 60 actual downloads (about a dozen of which I know didn't originate from here). Who's lame idea of a joke is this?

I think it means that 150 people clicked the download button on the game page. I assume this happens with any download that's hosted off-site

Speaking of that, my former musician told me I can go fuck myself and that whatever I release isn't even worth opening. But it's not like he hasn't been relentlessly criticizing everything I do since, like, forever

He can say that to the 10k page views
Pages: first 12 next last