Morgan Freeman is the hero!

"Shawshank Dead Redemption: Red's Revenge" was one of the entries in the RMN's 4th Birthday 4-hour the Cake is not a Lie! 2011 event. This game was made by NewBlack (author also of Terminator 2k3 and Novella, that I reviewed here) in exactly four hours and it's a badaptation of the popular 1994 movie "The Shawshank Redemption" (that oddly in my country was instead titled "The Wings of Freedom"! Seriously... don't ask me why), based on a 1982 Stephen King novella. In this movie the protagonists are Andy Dufrense (Tim Robbins) and Ellis "Red" Redding (Morgan Freeman), that are both convicts in the same prison, the Shawshank penitentiary.

I won't spoil the movie if you are going to watch it, just note that the warden is a bad guy... and in fact in "Shawshank Dead Redemption: Red's Revenge" is the same! 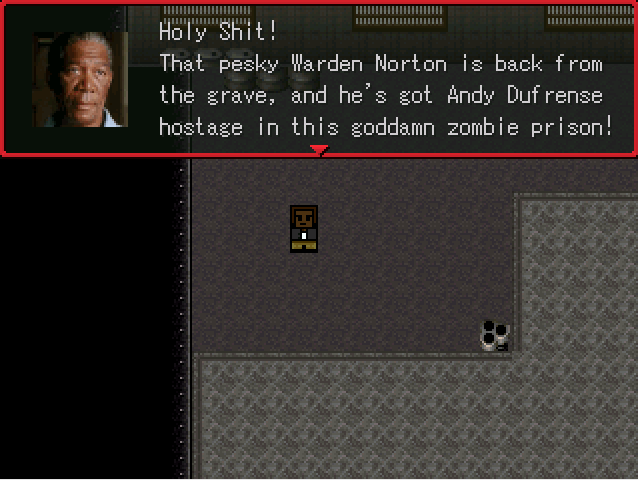 That's more or less what happens in the movie. Well MORE or LESS!

But there is a difference: the evil warden Norton is also an undead and now the prison is full of zombie prisoners. But no, that's not enough! He is even holding Andy Dufrense hostage, but his friend Ellis armed with his trusty shiv will rescue him, of course!

In this game, or should I rather say little sequence, we play as Ellis that is the protagonist, unlike the movie where the real main character is Andy. The game features a single map that we have to cross, avoiding or fighting zombies using a shiv, but there is a catch: the zombie constantly change eye color from red-green-blue, and we can do the same with the shiv if you press Shift. Guess what? It's a Rock-Paper-Scissors zombie-prisoner-shivving system, since you have to match the color of the shiv and of the zombie to kill it! But yes, it's also important to avoid their attacks of course, or you can just run to the door and... win!

Yes, the game is super simple, and super short, you can probably finish it in four minutes, but for a game made in four hours that features a custom made system and custom made charsets, it's not that we can ask for more (well maybe for a better map since it's rather boring and ugly. I also would have liked an ending cutscene, but probably that's too much!). Really.
What else? Well you will probably spend more time reading this review that actually playing the game. So play this game, you just have to spend a little of your time. Very little! 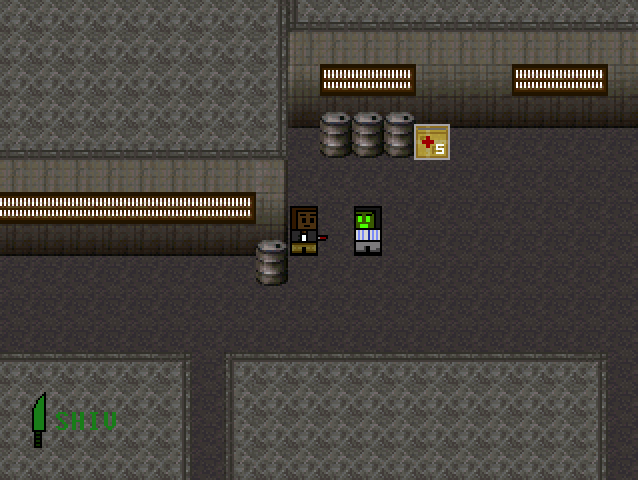 Green eyes means green shiv! It's not too hard to remember, I guess.

Final Verdict
Shivshank... no, wait, Shawshank Dead Redemption: Red's Revenge is really impressive due to the ridiculous short time (still I cannot give a proper rating due to the shortness of this project) in which it was made, and the premise is really ridiculous (but I was right, everything is better with zombies!). It's really a pity that this micro game wasn't expanded further, but the rules were these: four hours and no more! The result was clearly peculiar and interesting, give it a try!