War of Two Worlds is a fantasy rpgmaker game made by MarkC originally released in January 2005. It's a complete game and takes many hours to complete.
In this game we play as Kersh, a young orphan that lives in a coastal town called Mika in the center of a war-torn country. Tristan and Griffit are his best friends and all start when they decide to visit a nearby deserted island once inhabited by the now-extinct dragons. In this place, aptly named Dragon's Hive, they find an egg of the last living dragon, and guess what? This is where trouble starts for our friend Kersh that has to leave his hometown while being pursued by those who want the egg.
And so the adventure begins...

Ok, it's a key, we can clearly see that... and of course it is needed to progress!

War of Two Worlds starts immediately presenting the backstory of the world and fleshing out the main characters, and this is a real good aspect of the game: the developer clearly spent some time to develop the lore of this fantasy world, that despite its apparent "classic" feel, it's really well done and detailed. Characters are likeable (except Siddon, he's the worst!) and interesting, most of them have tragic backstories, but hey there is a civil war raging, so it's understandable. A nice fact is that the epilogue lists what happened to them.

Anyway there is a flaw in this because the game often drags too much with frequently repetitive dialogues, and some inconsistencies of the plot (why that egg is so useful as it does not seem to be useful for nothing except attracting trouble? Why after the middle part we have to deal with every little issue that happens in Dracogaia?? And Siddon... Siddon! He's the worst, why do we even need him? Well play the game and see but makes no sense at all for me... he even uses the same element of Griffit, so he isn't even necessary to be inthe party at all). In the end the story is not bad, but some reworking of the dialogues and polishing of the story would greatly improve the overall experience! 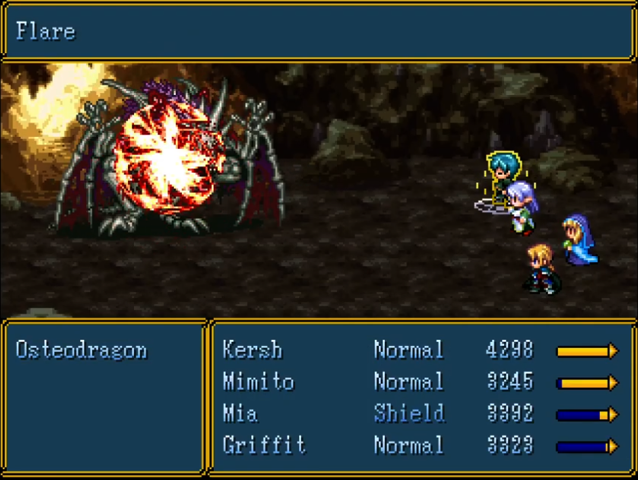 Expect to fight many hideous creatures like the... Osteodragon! If only there was an osteoporosis spell!

The gameplay? Classic rpgmaker rpg game, and I mean really classic, including (unfortunately) random encounters and battles against bosses. Sadly the repetition of encounters becomes sometimes annoying, and unlike the boss encounters there is little strategy involved (just unleash your strongest attack to win). At least enemies drops items that can be used to create some useful equipment, and there are minigames from boulder puzzles to fishing and duels. At least there is some variety!

The game is also pretty linear, as it railoads you where you need to go (well a good thing is that this makes nearly impossible to get lost!), so don't expect exploration but be ready to face a lot of backtracking! Especially for example with the forest right in the beginning that feels a bit excessive, especially because it happens right during the first two hours of the game.
But at least the visuals are nice, MarkC doesn't make bad maps, they go from average to good, there are some minor errors, but nothing really worth mentioning, the final result is pretty good and the resources are always used well. Nice battlers, nice facesets (that also match the characters' appearance) and nice monsters, what else? Oh yeah, nice music selection too, sure! 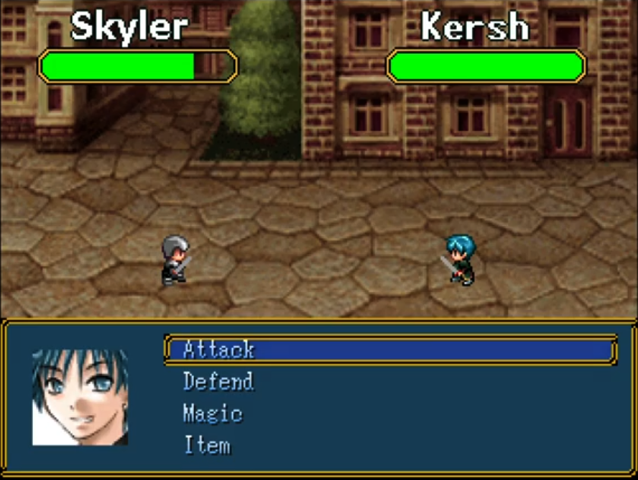 This game not only has boulder pushing and lever puzzles but also one to one duels!

Final Verdict
War of Two Worlds is also a war between many positive aspects (especially visuals, story and music) versus many flaws (pacing, repetitive combat and backtracking), and the final result is a rather average game (even not mediocre, rather a game with some hights and lows). I liked a lot some scenes, events, minigames/puzzles and dialogues, but I admit that the more I played, the less enthusiasm I had. It's a pity because there was clearly a lot of passion put in this, but some parts are unfortunately not so enjoyable or very though out. Some later parts also seems present just to drag more the story (I mean, it's nothing bad if a game is shorter than 10-20 hours! Because if it drags it loses lots of charm and becomes a chore to play, and this is unfortunately what happens here).

A pity, anyway the game has as many good parts to be spared from a bad rating. For me it's a 3/5 game not great but not really bad either.