The Cave of the Crystal Dad

I was not expecting big things from this game, heck I wasn't even expecting middle things. Given the title and the fact it was an entry into RMN's 4 hour 4th birthday event, that was back when birthday events happened every year. The theme was 'sequels that should never be made, but that we will make anyway', with a time limit of 4 consecutive hours to work on the game. Simonsez decided to make Generic RPG Quest 2, I'm sure there is a Generic RPG Quest 1 out there somewhere though I couldn't find it, but I'm pretty sure you could just substitute any teenage developer's first final fantasy fan game in its place and you'd get the same result.

So the game opens with the generic hero, Gozai Ohayou, son of Konichiwa. Yes you read that right, it's a joke game, remember? Anyway our hero being informed of his quest by the generic elder. It seems Konichwa was a great hero who died in an attempt to destroy an evil god's crystal heart. He did so, but it was a pyrrhic victory as not only did he die in the attempt his body was then turned into another crystal with the same evil effects, basically it was a zero sum game.

For reason that make no sense at all, this crystal was then brought back to the village where it sat being quietly evil and muttering to itself in the corner for an unknown space of time until some idiot decided to steal it and take it to a local dragon's cave. Enter the hero, he has to go and destroy it. Why he couldn't have done that while it was sitting in the village is beyond the scope of the game, but it was probably for reasons. 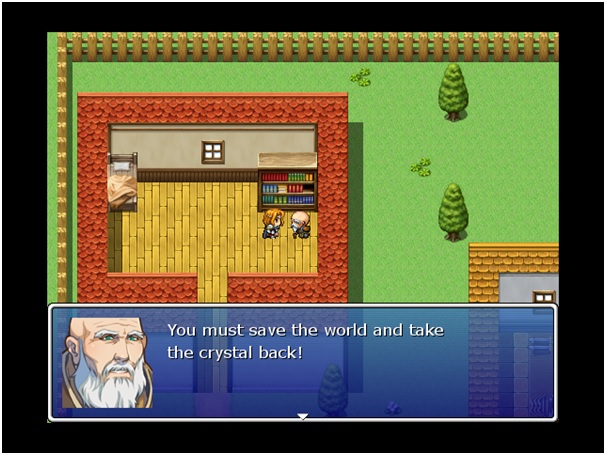 Wait, take the crystal back? In the quest intro you said destroy it, make up your mind!

So after accepting the quest (though seriously say no the first time you get asked) you head off into the wilds of the generic forest to battle the first five monsters in the default RPG enemies list. I mean really in a four hour game you not going to be looking for custom graphics or sounds now are you? In fact as expected everything in the game is the default RTP, and it's just as blocky and bland as you would imagine it to be. Though there are no passage errors or obvious faults, so the developer had that going for them.

As you travel you pick up three more party members, bringing your complement to the standard awesome foursome. The female healer and token love interest, the strong gruff dwarf who can wield a great axe one-handed and the cute mascot with a smart mouth, well actually the quite ugly imp mascot with the smart mouth, but no time for custom graphics, remember? 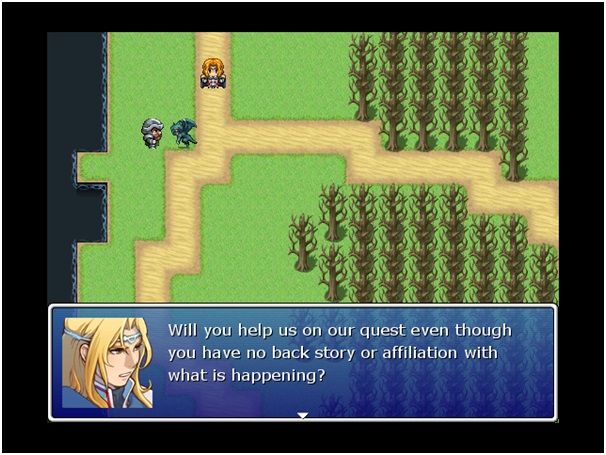 Honesty, who knew that would work?

And then you start to grind, and grind and grind. The maps aren't that large but the encounter rate is high and you're pretty much fighting enemies every 10 to 15 steps until you get out of the forest and into the city, which oddly is smaller than the village you came from. This city consists of an Inn with no beds and a joint weapons/item ship with no visible means of entry for the shopkeepers. Also it's snow-clad, for one must assume the reason that as we've had the forest and the sunlit home village, a snowy expanse is the next on the list. I imagine the Dragon's cave will probably be dug into the side of a volcano or at the peak of a forbidding mountain range.

So after a quick kip you head over to the shop to engage in retail therapy and stock up on a ridiculous amount of stat boosting items before running across a possible 5th member for your party! Well that isn't generic; now I have to make a choice, which one of my standard party members do I dump to make room for the self proclaimed bad ass?

That choice made it's on to the Dragon's cave which is disappointingly just an underground lair, how the mythical dragon gains entrance is beyond me, but since we never see it I suppose it doesn't matter and then on to the disco shoes wearing Dork Dark Lord idiot who stole the crystal Dad in the first place. After history repeating itself we go up about 8 levels in a single battle and then we get a game over crash. It's a simple fix, grab the face005 from the RTP and stick it in Graphics/Pictures (you'll have to create the folder) to ensure you get past to the end. Though that is pretty much just showing you that face.

Anyway, I wasn't expecting big or even middling sized things and I didn't get them so it's all good, and what I did get pretty much covered the price of admission. I could only recommend this game if you are working your way through the birthday event games or if you wanted to engage in a bit of mindless nostalgia. Otherwise move on, there is very little to see here.