0 reviews
On that day there was a flood of light, and soon thereafter the rain began to fall. That's when the fog began to settle, and the light of the sun could no longer reach the surface. And then when the shadows began to appear, lurking within the denseness of the fog. From that point everything changed..

..or has it become a Ghost?

It's been a little over a year now since the project was re-introduced to the community. There have been plenty of screenshots, a couple blogs, a few videos, and some mechanics information released.. but as for the game itself? Obviously not, and even after being "in production" since the RPG Maker '95 was first partially translated by TNomad back over a decade ago, there have only been a select few who have actually had a hands-on experience with the project. Yeah, there were two or three demos released to the public, but they were far from being note-worthy. My point is that I've been at this for far too long to see it not finished. However, that's much easier said than done..

I have A LOT more going on in my life now than what I did over a decade ago. Back then I was barely starting highschool with no kids, no real-world-responsibilities, a bit of a part-time job.. and a lot more motivation and awesome ideas to make this project into what I originally intended for it to be. I even had a lot more help, a lot more access to resources. However, I still had the same perfectionist, overly self-critical attitude that I still have to this very day. That hurt me a lot more back then than it does now, considering that back then it is what cost me a lot of good resources and help. If I had those same resources and help now the project would be progressing much smoother, much faster. Considering that my credibility is not exactly in the best condition for me to be asking help within the community, I'm a tad bit on my own unless I seek outside the box. Well, whatever the case may be, I'm still looking to release SOMETHING, and not just a resources release. If the project never sees completion, I'd be happy enough with a content-heavy demo considering how variable the gameplay mechanics are.

Well, as it stands right now, I don't know an exact time for when anything at all will be ready. I can tell you that the battle system is receiving yet another revision, partially to fine-tune things even further, and partially to revamp some ideas. One noteworthy issue that I had with the battle system was that there were some ideas that seemed TOO similar in execution to another individual's combat system, whom just so happens to be a good friend (I'd say :-P) that was once helping me very closely with design ideas and testing before I went dark for a few months. I think I'm finally on to "perfecting" the combat, and once that's out of the way then everything else will be full sail ahead. Most of the gameplay mechanics are being built around tweaking variables, and the story is being handled separately from that. So if there were ever a moderate change to something that needed to be made further down the line, changing a few variables here and there would easily take care of that without the need of going and completely revamping something.

Anyway I feel like I've drawn this blog out long enough and given the nay-sayers more than enough fuel for the flames. So on that note I just want to say that I appreciate everyone who's still supporting me on the project and looking forward to it. The biggest goal I'm trying to accomplish is that I don't want to disappoint you all. If just a demo alone far exceeds your expectations, then my job is done. This is my swan song to the community and to the community that gave birth to the idea of the project.
Title Screen.

Jesopher speaking with an Overseer. 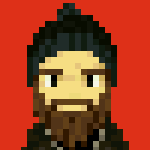 Close
06/12/2011 07:44 PM
Just check the video section, it's Finding Forever Eden all right. So unless he passed it on to one of his padawans then it must be Rowen Adam Kadmon.
Crimson_Legionnaire

Close
06/12/2011 09:45 PM
Oh yea Vaporware, the best of the best. But I hope this project is completed its been atleast 3 years since Ive worked with RM2k3 so its refreshing to see this project again.
Megollyen

edit: man shit you can't even make DNF jokes on Line's End any more. You actually have to be original!
Tau

Lines End is the rpgmaker equivalent of a Final Fantasy VII remake?
Demicrusaius

Close
09/05/2011 11:00 PM
I was accused of being this person once because of my own Eden series and our apparently similar aloofness.
Pages: first 12 next last