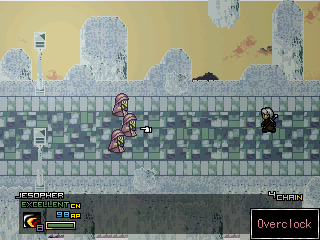 Overclock Mode inverts the colors of the battle field. Kind of like a "stopping time" effect.

I dunno, I always hated that effect even when it was used in games for precisely this (like dmc3). What about say, blurring the entire background like it's out of focus, or something else like doubling the battleback image up in photoshop or whatever and adding a 70% opacity "hard light" duplicate layer (dunno what it's called in PS, but in PSP there's a "hard light" blend mode) on top so everything looks like it's all glowing.

Just some idea, this is a beautiful looking project and it pains me to see the dreaded "negative" used :P
Nerow_Alexangelos
115

Close
10/18/2011 01:37 AM
Honestly, if this project actually gets around to being complete and is received pretty well, I plan on giving the visuals a major overhaul for or after the final release (BANKAI!!!!!!). So your idea is something I'll keep in mind. Thanks.
Pages: 1