Take Down : Lambs of Destiny

Hello and welcome to another review of another episode of the Takedown series.
See my previous reviews for more!

Takedown: Narwhal of Doom
Takedown: the Panda of Truth

This is time for Takedown: Lambs of Destiny. Anyway you do not need to play the other titles to understand anything, this is a stand alone adventure like the others anyway play them, because they are fun!

Takedown: Lambs of Destiny is the story of a Mercenary Team. Or better, Mercinary Team! The 8-Bit 4-Hire is a group of skilled professionals initially composed by the veterans of the Sloth Wars and Hydra War: Muscle Man (the Black Belt from Final Fantasy), Princess Noname, and Sean Connery. But they soon will get new members, trust me. Their mission? To stop a war from happening, a war that will involve army of clones. 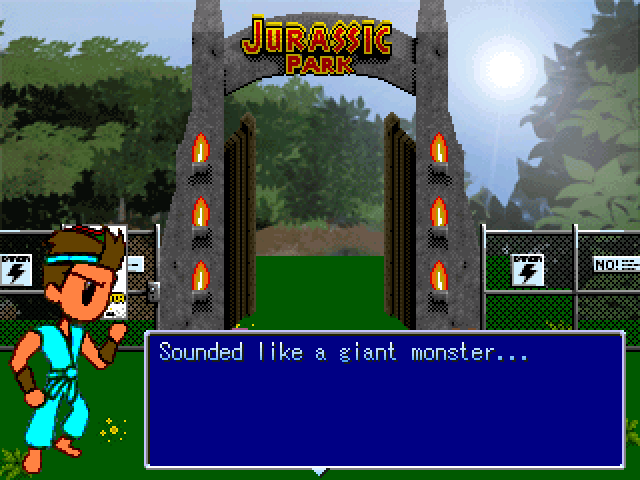 If you played some of the other Takedown games you will know what will expect you: a wild ride with lots of references to videogames and movies: Super Mario Bros, Silent Hill, Star Wars, Jurassic Park, Castlevania, Kingdom Hearts, Final Fantasy (from I, to VIII and others too), Metroid, Sonic The Hedgehog, Metal Slug, Diff'rent Strokes, Pokemon, Zelda and so on. That's a lot, really!

The visual style is similarly a bizarre melting pot of vastly different maps and backgrounds. Some of these are bare bones and ugly, others are nice and look pretty good, same is for the charsets that coming from different places and time are of different sizes and styles, but being them videogame characters, that's really not a surprise. The game is not about a coherent world, but rather a sort of multiverse that connects different settings, worlds and characters. Love or hate it, it's like that! 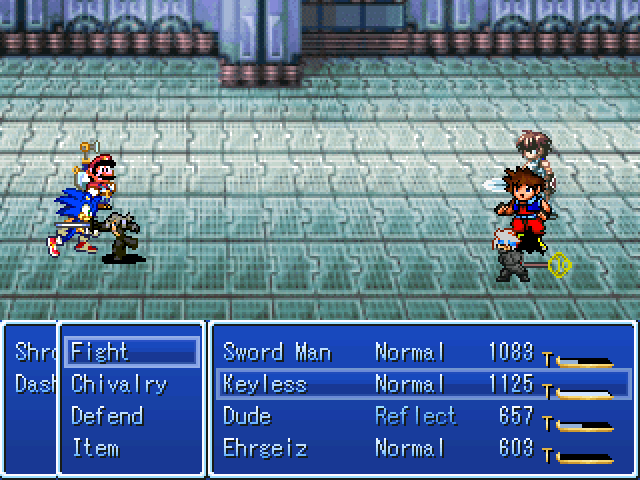 Our heroes face Mario and Sonic, but we cannot lose with the son of Sephiroth on our side!

The game is about completing missions, after all this is a team of ̶m̶e̶r̶c̶e̶n̶a̶r̶i̶e̶s̶ mercinaries and dangerous missions are their job. The various characters, starting from Muscle Man, have different skills and abilities: some are able to heal, others have different elemental attacks, some have powerful attacks, others have less strong attacks but they hit every opponent on the battlefield, and so on. Luckily after a while you will get an item that lets you customize your party, even if Muscle Man will always be the leader that you cannot drop.

It's interesting noting that characters learn new skills as they level up BUT there is no experience system: the party members automatically earn a level after some important combat encounters or tasks, but do not worry since the game is largely linear (but not totally linear since there are some extras that can be unlocked only exploring the game fully, and I'm talking of unlockable characters!), and this means that there are absolutely NO random encounters, some are mandatory and others are optional. And that's good, I guess, there are also some slimes that are save points, and they are often near a healing point where you can restore your character for free! These are frequently found about once every two maps, so do not worry! 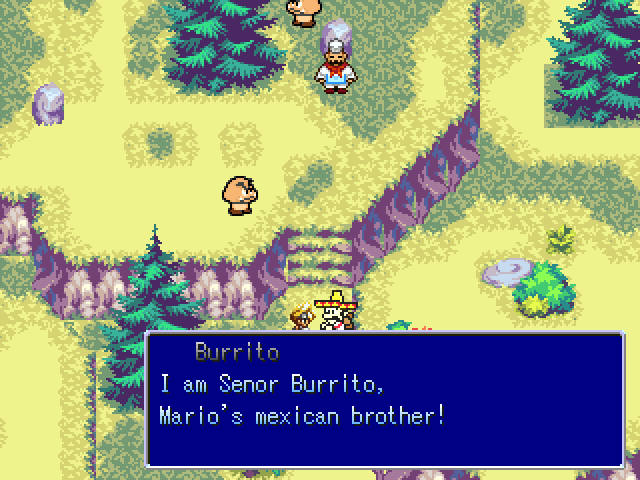 Please to meet you! (Did you see the previous pic? Well, I hope he does not ask me if I have seen his brother! Uhmmm)

I admit that the game is pretty much easy: there are a couple of instances in which you have to collect some items to progress or need to have a particular character in the team for a particular reason, anyway there's plenty of money and consumables are readily available and not even that useful,if you take your time healing and preparing after each combat. I only had to play a frustratingly number of times against ONE particular boss,
Show
Ganon
, maybe my party was not the best, anywway the fact was that it was so fast that sometimes it acted two times before I was able to issue a command, and sometimes throwing two powerful area spells destroyed my party without the chance to even attack! Other times instead I nearly won... but it's still possible to win. And no, it's not te final boss, I mean after the credits there is a short extra part with some additional combat encounters that are nowhere as difficult as that one!

A problem of the final part is that the dialogue window is messed up, and this also happens a couple of times in the earlier parts. There are also some map glitches but I found no game breaking bug. Just typos and some imprecisions, but you know what? I liked the game, the humorof some parts and the excellent choices of music, especially during the intro and the ending. 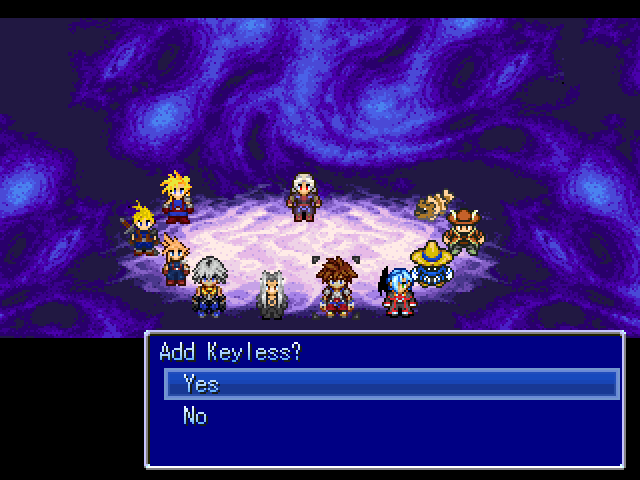 Here's my squad, but trust me, I did NOT unlock every character, so if you will play this game try to beat me and collect all the available team members!

Final Verdict
Takedown: Lambs of Destiny is so far my favourite entry in the series. WHAT? Yes, I know I gave a better rating to the Panda of Truth (that also had some more originality despite the shortness), but that's due to the presence of many imprecision and glitches, minor problems that affect this game, and that did not prevent me to enjoy the game. But I know that other people make think it different, a lot of things could have been organized better, for example the teleport: this is added during the final parts of the game, where its usefulness is really less important, I mean I walked around a lot... and NOW, when we're nearly finished you give me a teleport? Is this a joke?
On the other hand I simply loved some parts, for example when watching the results of messing with the clones' Dna! Reeeeally funny, but uhm ok that's me! I had fun, and I appreciate the creativity, so it's still 3.5/5!

author=Dudesoft
That was a very kind review! 3.5 is quite generous haha, but I agree on favourites. Lambs is 100% my fave.

It was cool... STILL I prefer Panda of Truth! Anyway 3.5 is pretty much fair for the content, I had fun!
Dudesoft

STILL I will play it again to unlock the other missing characters!

I admit I rushed to the end to see what was going to happen... whoa cool ending song, so sad anyway.
Pages: 1