Final Fantasy V centers around a group of four strangers brought together by circumstance to save the Crystals that have mysteriously begun shattering one by one. The one behind the phenomenon is the villain Exdeath, as part of a plan to release himself from imprisonment and to gain the power of the Void, a realm of nothingness, which could bestow absolute power on one able to resist being absorbed by it. The four Warriors of Light turn their attentions to defeating Exdeath and stopping the Void's energies from consuming their world.


The Uncanny series is a series of games for rpgmaker2003.

The purpose of which is to virtually recreate certain SNES RPGS in rpgmaker2003 as reference material, in order to encourage fellow players and users alike to take a closer look at the SNES RPGS which we’re trying to emulate and carefully examine the various techniques these games employ.

Often these submissions won’t be exact recreations and at times will take a few creativity liberties either due to technical limitations - which will be documented - or to create something entirely original out of these assets and materials.
----------
(Under Construction)
How to rip chipsets from SNES games,

-how to create large animated stationnary charsets
-how to rip animated effects.

...So I started working on Final Fantasy V again, but to get things started, I thought I'd share with you guys,
a game I remember briefly playing a couple of years ago before starting to work with RPGMAKER2003.

These games were a series of small Final Fantasy Games made in Marcomedia Flash by “Clairvoyance” or
“clairvoyanceteam” as they’re often referred to on Newgrounds.

Clairvoyance was supposedly a small group of anonymous flash animators from 2ch.net.
They released two flash animated shorts based on 2ch's AA characters for the annual Flash Bomb festival that took place in Japan,
Which you may have seen at some point over the past 10 years:

and Nightmare City: Catastrophe for 2005


Now, it may not look all that impressive by today's standards, but Nightmare City in particular, was absolutely astounding for anyone who was still working with Flash animation back in 2005. Because it was one of those few animated shorts that made a lot of flash animators realize you could actually produce animation of genuine, quality in Flash, without solely relying on motion tweening and making it look cheap, as so many TV produced animated shows have unfortunately chosen to do today. 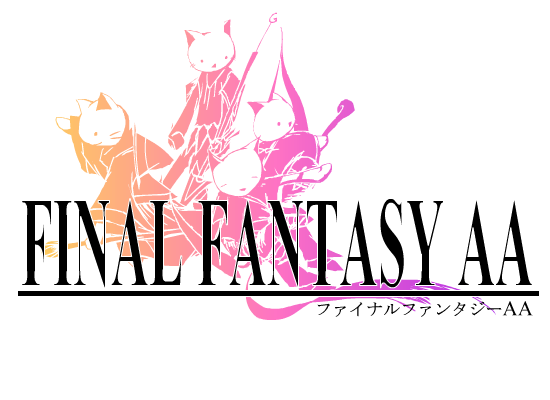 Anyways, I’m assuming that, before working on these animated shorts is when Clairvoyance decided to work on Final Fantasy AA. A series of Final Fantasy games that parodies the popular RPG series with 2ch Ascii Art characters.

...To be perfectly honest with you guys, I’m not too sure on the specifics.
(I’m actually hoping someone reading this, would be able tell us more about 2ch and their Ascii characters in the comments section below.)

But I always thought it was really cool to finally be able play a fully functional Final Fantasy battle system in Macromedia Flash, something that so few have tried. 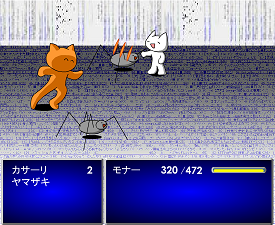 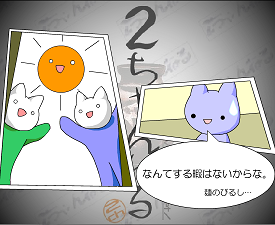 But, what makes these particular series of flash games so memorable for me though, is that, unlike normal Final Fantasy games, outside of the cut scenes and random battles, Final Fantasy AA has no field map for the player to interact with. The game's structure is essentially segmented across boss battles that function as puzzles and flash animated cut scenes that move the story forward. 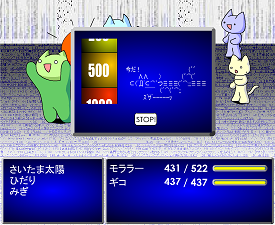 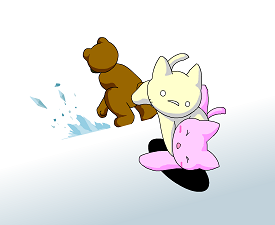 Now, while these games are primarily injokes about 2ch.net, this choice to not create a field map for FFAA, was very much due to how limited and restricting the internet was back then in terms of memory and storage - It would've just been too cumbersome to download and too time consuming to create a Final Fantasy of regular scope for users still using dial-up back in 2005. 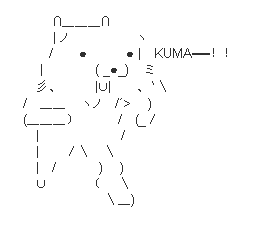 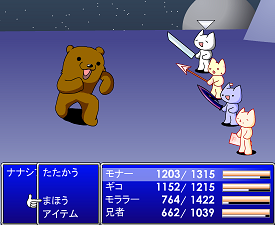 But by eliminating this need for a field map and segmenting the game into an episodic structure, the end result is an incredibly satisfying take on an rpg series that I haven’t really played or seen reproduced since then:

You basically have a game where the player no longer has to worry about gathering items, managing equipment or gaining experience points - things that are often meant to purposely impede the players progress.

Instead, what you’re essentially left with in FF:AA is a game where all the player needs to do, is focus on how to utilize the party’s spells, classes and remaining items available, to the best of their ability, in order to advance story. 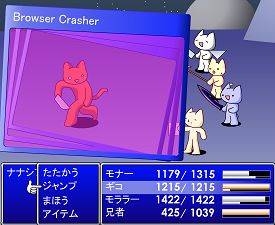 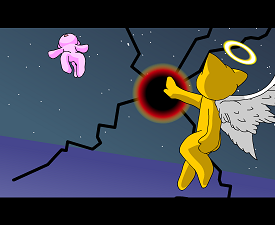 It's a game, where all you need to do as a creator, is to create a game that revolves around a single boss battle and tie it all together with great cut scenes, that tells a decent story.

It’s a very simplified version of Final Fantasy and far from easy to play.
But the reason why I've decided to talk about FF:AA in particular is because,
this is essentially what I'm trying to accomplish with Final Fantasy V:B@BB , although slightly different...


...But yeah, definitely check out Final Fantasy:AA when you have the chance!

Unfortunately, Clairvoyance has moved to http://www.miyasuke.net/ and has since taken these games down.
But you can still check these games out here through webarchive.org

or download the swf files from here
but you'll need to open them with a web browser that has flash installed and resize the window in order to view them correctly
or a use standalone flash player.

Just to make things clear,
You will need to have FLASH installed in order to play this.

Anyways, There is 1 intro and 4 battles in total, but I suggest checking out episode 5 first in particular, because out of all the episodes available, only three have fully functioning battle systems and episode five, seems to have the most polish before Clairvoyance decided to stop working on this series and move on to Nightmare City.

author=JosephSeraph
this was really promising... dont know how i didnt see it

No worries, I'm still working on this secretly, I just haven't had a chance to update the current progress video yet. But the reason why it's kind of hidden on RMN is because I have plans to eventually resubmit this game to the site once it's properly finished, so it will at least be eligible for the "Technical prowess" and "Best Fan Game" Award, for the year when it's finally released.

EDIT: I actually wanted to get in touch with you, Seraph, for a really small job I had in mind, for this project, that you might be interested in.