Well that was quick


Ghost Run is an indie game created with Construct 2. The game is made using JavaScript and will run in your Google Chrome Browser once you launch the game. The game has no title screen or anything, so the game will begin right away. This is probably the quickest game you will ever play (And I have played some pretty short games.) 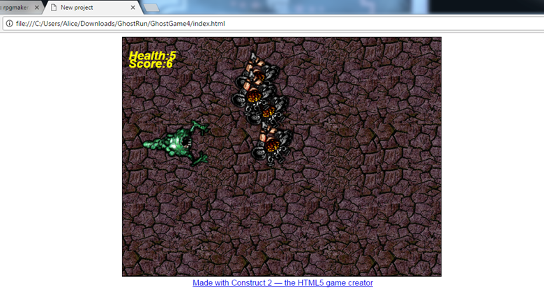 That picture is the game. The game is the picture.


You play as a monster, and I guess he's hungry or something. You control the monster's movement with the arrow keys. You need to move the monster to the soldiers and "eat" them. When you eat a soldier you get points. You start the game with 10 HP. If a soldier hits you with a bullet then you lose HP. If your HP is 0 then your monster blows up. To restart the game you can refresh your browser clicking the F5 key.

The purpose of the game is to get a high score (because you'll eventually just die.) The game isn't frustrating, but can become challenging to avoid soldiers if there's a swarm of them on the screen. I wish there as some background music or sound effects because the game just lacks any energy. And if you move to far down or to far to the right the HUD displaying your HP and points won't move. So it's better just to stay in one area. A variety in enemies or anything else would also be welcome.

The game functions for the most part, but isn't entertaining enough to really warrant being a game. This was the developers first attempt at making a game. So I'll be kind and leave this game unrated.