Remember two years ago we said remake was incoming? I had everything sorted out like "Man, this is going smoothly for a change." Then Life said "Haha, hold my beer."

Anyway. No more empty promises... HERE IT IS!

If you've played the original version, everything after the first 5 minutes have been revised. Many characters have been rewritten or redesigned(especially Phenix and Misty), and you'll follow multiple storylines concurrently with Phenix and Sledge. No more default battles, they've all been replaced with CBS.

Episode 1 is complete. Episode 2 is in progress.

As always, let me know of any bugs you encounter. I've played it through multiple times, but never formally had anyone else test it.

Tell me what you think of the new characters, the narrative, flow, etc.

So... I can't believe it's been 3 years since Bones and I released Neo Jado Episode I. We've been writing this story since middle school, and for anyone who's counting, that was 15 years ago. As with anything else, life gets in the way, and this project has been on hiatus for years. Well, it's time to make it right. I introduce you to neo... Neo Jado...


The default battle system is gone. It was pointless. If you happen to remember the boss fight from that place of unlimited evil, the new CBS is a simplified and streamlined version of that mini game. Many of the old action cutscenes have been converted into playable sequences a la Heavy Rain cutscene inputs.

There were core characters like June and Euthany that we skipped over entirely to make way for the previous release. Their storylines will be playable this time, including more of Sledge.

I hated the original Misty. Watching her made me cringe. We've rewritten her completely.

My biggest regret from the first 2012 release was the absence of Laura, the female lead protagonist of the game and my personal favorite character. We're thinking of ways to include her this time, without pushing back this re-release too much.

We've taken down the original download. It's just not the game we want Neo Jado to be, to put it lightly.

Since everyone agrees that our default battle system is pointless(including us), we're tossing it in favor of a little custom action.

The concept is simple. It's similar to the Cave boss minigame, except streamlined, based on character statistics and allows for use of skills. We'll have those statistics apply to the other minigames. This also makes the minigames a more logical extension of the gameplay. The existing story QTE events will not result in battles when you fail. We're taking a Heavy Rain like interactive cutscene approach to those.

This probably sounds like some kind of outrageous change to make to a game that's several years in the making, likely causing a massive setback in progress... but I'm actually done the programming already. The cbs, skills available in chapter 1, and the custom menu are ready to go. We're on to balancing the enemies.

Here's a quick WIP look at the skill menu Bones put together: 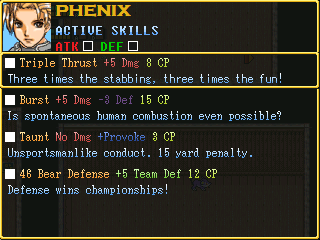 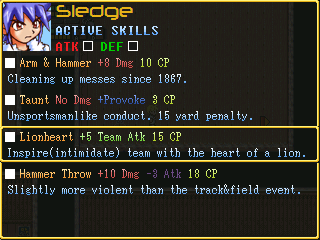 Only thing missing is the individual skill icons we have to draw.

I'm not sure how long it'll take to balance. Hopefully less than a week, since there's only... 5 or 6 types of enemies? Afterwards, we're gonna need testers, I think... anyone interested?

Sup guys. we haven't updated in a while, but progress is going well and picking up a bit.

I got a little teaser concept art for y'all. I present to you Phenix and Laura! 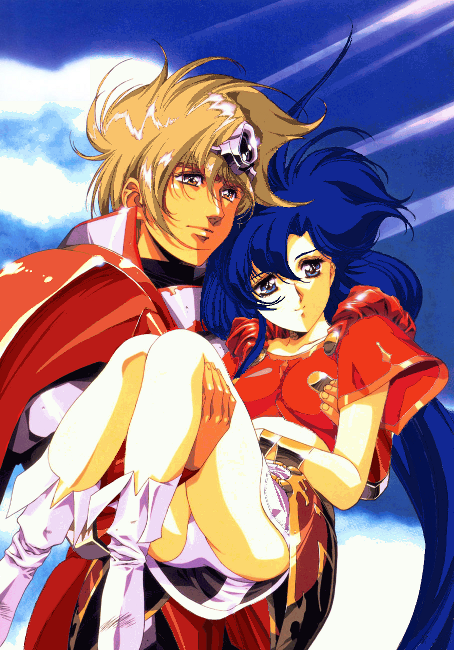 You haven't seen the girl yet in Episode 1, though you may have seen her about the profile page. Still my biggest regret of the summer 2012 release that she didn't make it. She'll be starring in Episode 2, however.

We were thinking about incorporating some stills like this in lieu of CG stuff. Old school style. What do you think?

By the way, I did not draw this. It's by Satoshi Urushihara. But I did painstakingly make it match Phenix and Laura with my limited art skills.

What's up, all? So, there's a couple things I wanted to mention...

A) Yay for over 100 downloads! Over 100 personages are witnesses to the ridiculousness that is Neo Jado. Thanks for all the support!

B) So, there's these Misao Awards thing at the end of the year? Not sure how they work, but it looks like you can nominate a game from their gamepage. Vote for Neo Jado for Best Storytelling, maybe?

By the way, even though we all know Neo Jado has the most badass soundtrack ever compiled, the sound and music award is for original custom works, which we don't do and therefore don't qualify for. So don't vote that. Thanks in advance if you do vote!

C) I'm gonna open up a game design blog about this later, because I want to discuss battles in Neo Jado. Specifically the issue with the party.

Party members will come and go as quickly as it pertains to the story. This really hampers the feel of the party, where in most other RPGs, you gain party members and build them up, and they mostly stay together for the rest of the game.

Conversely, I feel that having all the core protagonists together at all times, through all the dungeons and adversity, really limits what we can do with the story. For example, the story scenes in Borton would not have been possible (plausible), if Sledge had been with Phenix the entire time, despite the fact that they were both in the same city. There's a dozen or so other protagonists that will encounter scenarios where they similarly can't be together.

This weak party element is the reason we were encouraged to up the gameplay with minigames, puzzles, obstacle courses. Now I'm still trying to gather my thoughts about this, but I'd love to hear what you all have to say about it.

It's been a week since release. Other than a few gamebreaking problems that needed fixing, it's been a pretty smooth release. And now we're back to work.

This next release might be a smaller one, but that also means it might come sooner than including the next few chapters. Meanwhile, I'll update the profile. We've got a lot of outdated screens and videos. As always, go ahead and let us know any questions, concerns, suggestions, etc.

Well, it's a little later than expected, but it's finally here.

Instead of calling it a demo, since it's much too long for a demo, we're making it the first installment. At the end of it, you'll get a save prompt, and that file can be used to transfer party data to the next installment.

Slight delay, but looking for testers.

Dunno why I didn't foresee that the loose ends would be colossal, but they are. So our released is gonna be delayed another week, maybe two.

In any case, we're still looking for more testers. Let us know here if you're interested. It could be for testing the minigames only, if you don't have time to test the whole thing. There's aplenty of minigames.


Our first release is nearly upon us. I haven’t really checked on the game page in a while and just realized that most of the videos are pretty outdated.

Here’s a quick peek at the new systems look by Bones and an example of cancelling enemy encounters.


I honestly cannot figure out why the lighting with my recordings are so off. Anyway, dungeons are setup so you have the option/opportunity to skip every encounter.

The narrative is depicted through several concurrent point-of-views. For this first release, we’ll be leaving out quite a few of them. One reason is that our cutoff point for this release has several of those other plotlines incomplete/seemingly irrelevant and somewhat distracting from the main story. None of the other perspectives are irrelevant, but you won’t see the connection by the end of the demo. The other reason is that they’re not as polished or as compelling as the Phenix storyline. You will meet many of them along the way, though.

As for how long it is, I’m not sure. I haven’t attempted a single playthrough of the game. It’s certainly longer than many completed games.

So anyway, stay tuned. Should be ready in the next two weeks, but we do want to get some external testing going the week before release. Post here if you’re interested in doing some beta testing. Nothing fancy. Bugs, grammar, etc.

Also, we're looking to try some new system sounds for cursor commands. Anyone got any suggestions?

If you are reading this, then you know your worst fears have become real: the New Jado demo will not be released on June 1st, 2012. But now you're thinking, "well its June 11th, there would be no way you could release it on the 1st if it had already passed."

Anyway, some presentation ideas have inspired further character development, but we have the core story penned, so it only a matter of making a few maps and choreographing the scenes. Add some time to polish up the database and work out any bugs, and I think Sauce and I should have everything good to go for sometime around mid to late July, early August in the worst case. I'll talk over with Sauce to see if we can get some new screen shots or possibly a video showing off more content that won't spoil anything for you guys in the meantime.

Thanks for you interest, we plan on keeping the awesome coming.
Pages: first 12 next last