A brilliant story game full of dialogues, minigames and corn!

Ok, reading the description I expected a parody rpg full of cheesy lines and parody situations. While both these things are present, I found in the first episode of Neo Jado not the usual Jrpg, but a linear story game full of dialogues, puzzles and minigames.
Did I had fun? Let's find out!

THE GOOD
Ok, let's forget all you know aboud Jrpg and Rpgmaker games: here you won't have a party to manage, levels, equipment and items will be rare and they have a small impact on the gameplay (you can kill one enemy in one blow instead of two, but that's not an issue!) but you will have a lot to read. But hey, writing is really good, there are a TON of characters and you will play several of them in different sections, and the story is unlike every other I've seen, full of intrigues, weird situations and sometimes humor.
Yes, sometimes. I say that because despite encountering Goku or Megaman, Bomberman, Nicholas Cage or some other out of place character, the main focus is on a seriously epic story of political intrigue and big heroes: countries are at war and people die, assassins kills and soldiers fall. So yes, there's humour (often concerning corn, that is also used as save point and healing item) but for every silly situation you have ten serious events. So it's ok, even if the authors themselves sometimes comes out to break the fourth wall, I think that humor is well dosed (loved the Assassin Creed part!). 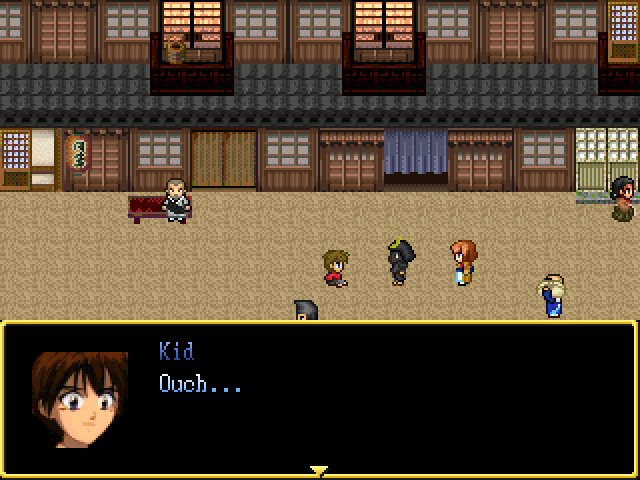 Gameplay consist mainly on quick time events, puzzles that require moving crates, stealth sections, mazes filled with traps, investigations and other diversions that remind to me the Rpgmaker game Fey, even if there the story was simple and short, here... and I'm talking about just of the first episode, lots of things happens and lots of questions arise on the several characters of this strange fantasy world that apparently isn't much different from the usual fantasy Jrpg worlds (that mixes technology of different eras, so there are knights but also gunslingers, galleons and trains).

The world is nice and detailed, each country has a different style so there are lots of chipset and charas used, and music is great too (I loved that you could hear "Hotel California" inside... well... the California Hotel!). Speaking about details it's impressive the number of animations and the quality of some scenes, the characters attacks throwing their weapons, jumping around, kicking enemies and so on. Epic and badass. The main characters are also interesting well written and I liked many of them, I do not have a favourite, maybe Sledge. 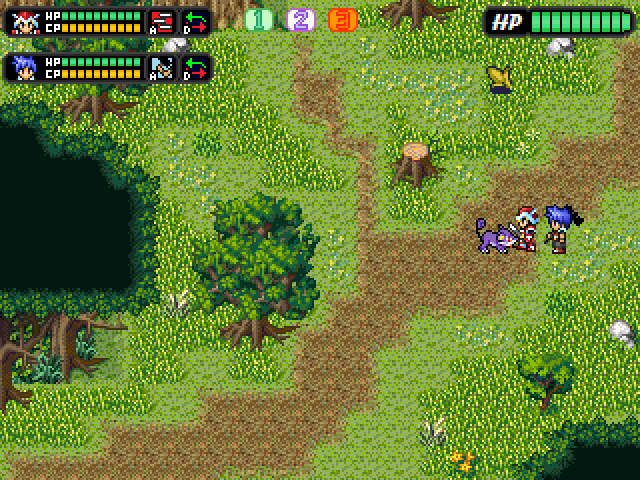 The... OK!
As I wrote before there are TONS of characters and charsets used, and while only few weird ones placed for humor feel out of place, because of different style and proportions (for example Megaman or Bomberman sprites), there is a problem with the variety of character portraits as their variety in quality and style is too great: for example Sledge seem super-deformed (and for the same sprite there would have been better choices I think) then you find faces from Suikoden, Fire Emblem, Breath of Fire, Roco, Anime and other sources and well... the result is a bit of a mess, I'd have preferred they would have sticked just to one style and maybe used charsets only or the main cast or, even better, edit them as they did in Legion Saga, by resizing and removing the old backgrounds in order to make them more similar. 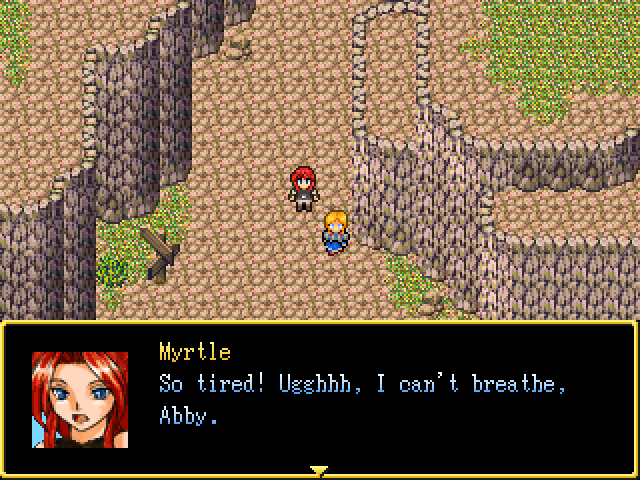 THE BAD
Oh yes, there are also some problems, one for me was the difficulty: normal combat is a piece of cake (also no problem with quick time events), I NEVER used healing items or the special moves. Boss battles were just a bit harder, and a lot longer, crate puzzles and arm wrestling were ok, the mazes with the traps were almost impossibile and the stealth sections were impossibile, luckily these last two minigames could be skipped.
Oh I forgot to mention that the shooting and forging minigames that were ok, but a bit odd since you use a couple of characters that you see just a couple of times, so there was no reason to play them as a short animation would have been enough, but probably these were inserted to add gameplay between dialogues.

Then there are some minor problems such as the sofa in the Barton room on which you can walk and the game crashes of you lose fighting the bear boss, but nothing much considered the amount of content, I've found no game breaking errors or annoying features, even if I still wonder why "Options" make you exit the game! Oh and another bad thing is that the game ends "in media res" so that you'll keep wondering what happens next, that's what I kept asking while I played!

THE VERDICT
PLEASE READ CAREFULLY AND AVOID THIS GAME AT ALL COSTS IF:
1) You want an rpg and don't like linear storygames
2) You want a challenging game
3) You hate reading lots of lines
4) You prefer serious games and can't stand if they insert wacky humor in the story

Ok are you still reading?
If the answers is no at all the four points, well this is a great and funny game, not without parts that could have been improved, but it's nonetheless a work of love and with a huge amount of features and detail. I think that it should also be rewarded the intention to propose something new that's not the uguale jrpg or Final Fantasy copy. This is what I was looking for, and that's so good that I played it to the end, greedy for more!