Could you turn back time and make it all alright???

Clock of Atonement is a mystery RPG you can finish within 15 minutes, and despite its simplicity it is considered a sort of cult classic. The game was made by Daigo in Rm2k and then released even for mobile platform (iOS/Android) including an extra scenario, anyway this review refers to the first original release.

The premise is really interesting: we play as a stalker that "accidentally" killed a girl that was the object of his love. He regrets what he has done, and unexpectedly he meets a man that gives him a clock that can turn back time! What's better than this kind of magical artifact if he has to savE the girl from himself?
And that's the story, pretty original even if in the end the game is pretty linear and can be considered an interactive visual novel more than a real puzzle or adventure game. 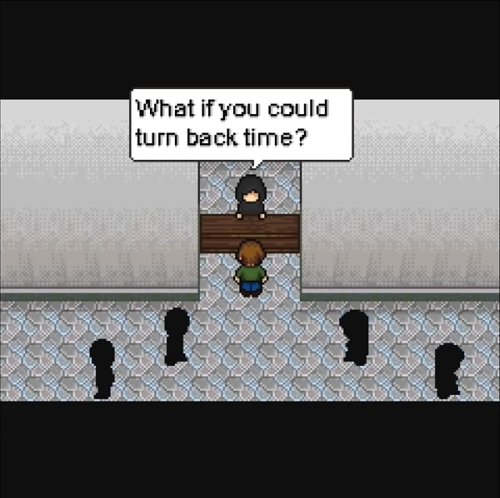 There are serveral endings and thanks to the powers of the atonement clock it's possible to rewind time and experiment them all, and they are triggered depending on the items that you interact with (highlighted in glowing green color). Only when you have experienced all these endings you may witness the real, final ending (yes there is only one ending)! So yes, basically the "game" just consist in witnessing a series of events before your eyes, making some choices that aren't really choices since these are needed to complete the game!

The whole story takes place on the single map (two if you consider the alley where you receive the atonement clock) that is the house of the girl/victim of the protagonist. I won't say anything else, but yes, this is more or less the whole game.

Despite the simplicity and linearity of the game the atonement clock system is cleverly implemented and the gameplay is probably the most original aspect of this title, short but it's worth being experienced. There is also a lot of attention to the details, I like for example how characters speak through the use of speech balloons (so not in with the usual Rmk dialogues bar) and how the keys are displayed on the screen, making the game really easy to play also for newcomers.

Visually the game seems to use a classic rpgmaker style that reminds to me of the refmap/fsm/mack assets, but looks slightly different. Are these edits or really custom made? I don't know, anyway they work pretty well! For the music... there isn't any! Except for an ambient sounds that (appropriately) is the tickling of a clock. Just that one!
I must admit that the game despite the simple and cute graphics (that may make the players mistake this for a comedy game!) is rather disturbing for the graphical rapresentation of the murder... but yes, this isn't a lighthearted game and we also play as the villain of the story, so this was to be expected. 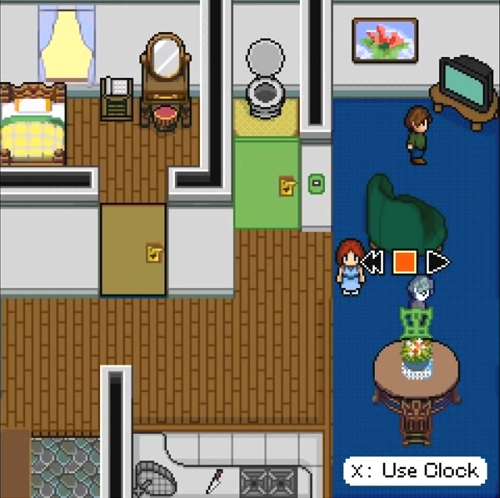 The wondrous clock of atonement in action!

Final Verdict
I playes Clock of Atonement because everyone told me that this was one of the unique old rpgmaker games that are a must play for the originality (just like Professor McLogic Saves the Day) and interesting use of the engine.
I admit that there isn't a lot of "game" here (the only problem is the limited interactivity, but at the same time it's due to the fact we have to see what the creator decided to show us), so if you are looking for hours of fun you've to try something else, anyway it's no doubt that the developer made a bold move using the system in an unconventional way.

It's pretty good and really interesting from a certain point of view, at the same time I understand this isn't an experience that can be for everyone! Still, good job!