I admit I was attracted by this game's name: Mystical Princess Ultra.
Wow!!! But then I learned that you are not going to play as this uber-powerful heroine! Oh no, I was wrong!
In Mystical Princess Ultra we play as a total wimp, Oscar, a young level one adventurer that meets by chance the so-called Mystical Princess Ultra while exploring some ruins. As you can expect she's strong, she's powerful and she wants to conquer the world, so our friend Oscar soon understands that it's better doing what she says, or she'll make his head explode!
Then the pretty and terrible Princess brings Oscar with her in a little unnamed town and...

...what follows is a short adventure set in this tiny village that the Princess wants to conquer, complete with some combat encounters and few different endings. This game is just a short adventure, keep this in mind, that in any case provides everything that's usually found in a more typical jrpg: fights with guards and monsters, a simple little puzzle, party management, and a medieval village complete with shops where it is possible to acquire better gear and healing consumables.

Graphically this game was made using RTP (except for some bizarre enemy sprites found somewhere), but at least I found the facesets to be pretty and matching their charsets. Maps are simple, or mediocre if you want, but there are zero problems or bugs, so I don't complain too much. 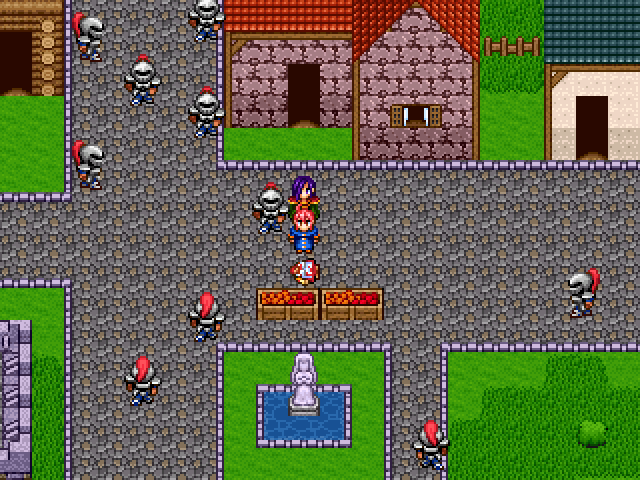 Oooops, we're under arrest, I suppose!

During the adventure we can make some choices: it's possible to be violent and fight the guards or we can instead prefer a more diplomatic and sneaky approach. Grinding isn't exactly needed, but it's a possibility: Oscar is a low level character that will improve his mediocre skills and measly hitpoints just after couple of fights (learning some abilities in the process, like throwing sand to blind enemies), while instead the Princess is already quite strong with her mind explosion attack and healing powers.

What I liked is that, for a change, we have a protagonist that is a total wimp, and a secondary characters that is far stronger than him, and quite evil (in fact even if the title is "Mystical Princess Ultra" we never really control her, except during combat, but we will have to endure her uncomfortable company). But don't worry too much, the Princess is a violent girl but her enemies aren't exactly "good"; this story is a clash between two dark lords for the control of the city and the nearby territories.

The Verdict
What we have here is a mediocre micro-rpg, but, as I said before, I absolutely love the premise of playing a young adventurer that becomes the right hand man of a ruthless and ambitious magical warrior princess! Some entertaining dialogues really made me wish for a sequel, with other adventures of the Princess on her quest to conquer the world.
This is a silly little adventure, a parody of the rpg genre, that has no purpose besides wasting an hour (or maybe less, if you won't explore every choice and possibility) of your time.

The final verdict is 2.5: this could have been a better game, if it was a little bigger, more detailed and more refined in every department (mapping, music, graphics and gameplay). In my opinion this is a great idea with a mediocre execution, but not totally bad, since I had fun playing it. So play this game if you have thirty minutes and you would like to try a little silly parody with no fear of commitment.

Close
12/03/2019 06:03 PM
I enjoyed this review too. I think I can't say much, besides that this game I think was the first one I did in a couple of days. You see the trend in these games, I make something, and try to make something else in even less time.

The way you phrased that sounds so awesome I think I'd love to revisit the idea. I'll give Ultra some love, someday.

The way you phrased that sounds so awesome I think I'd love to revisit the idea. I'll give Ultra some love, someday.

Well, if you do, keep the humour and the funny dialogues! My phrase do not mention that, but this is an important feature of this game and one of the things I liked most!
Pages: 1