Ok let's start with an explanation: this is a chain-game so one person start it, then another one adds his part and so on until the ending (The devs are Archeia_Nessiah, Ocean, GreatOldOne, Skie Fortress, JIHAUS, marimo, Khos, and mellytan). This is something noteworthy as I played some other chain-games in the past and the changes of authors were really evident. There are some changes of style during the course of the game, due to the different authors, of course that's natural, anyway overall the result is pretty good.

CHARACTERS are for the most part interesting, especially for the twin mages! There are a lot of funny dialogues among the different party members, some of which are "unlocked" during some situation, nothing really complex by the way this makes the game enjoyable as this adds character to the protagonists. There are also cutscenes that are well done and always made me think about what was going to happen next! 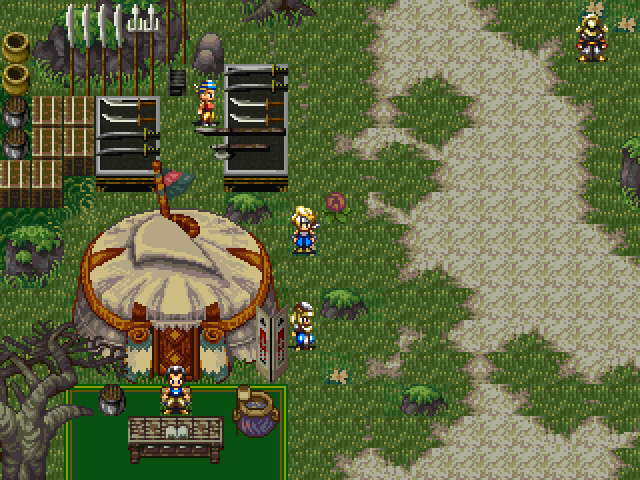 STORY is instead not very original (but it's clearly ok for a chain-game), but not in a bad way at all, just "classic" (typical fantasy Jrpg world with knights, mages and ninjas, no surprise!), simple but still fun. It works well despite the linearity, infact do not expect to explore freely a large map, in the end you won't have (spoiler!!!) a fantastic airship to move freely around as this is a linear experience, but a good one.
And another good thing is that they added some details and recurring situations added (like the wandering knight you will meet in various circumstances) that show a lot of love and care for this project.
Oh I almost forgot: there are some puzzles and diversions, do not expect complex minigames as they are short and not difficult at all, but I liked how this makes the game less repetitive.

Oh and there is also a Dev Room you can find in the inn of last town towards the ending, where you can get some info on the creators.

Portraits are custom made and are excellent, while most sprites come from Bahamut Lagoon, and that's ok since I don't like them for a matter of personal taste, but they match perfectly with the portraits and the world so everything is coherent. Mapping is quite good overall, by the way I was not fond of the style of the dark colors used (LOTS of green/grey/purple) as there is really a lack of bright/warm colors. Maybe the idea was to make a cold and dark world, because this is in my opinion what I felt. 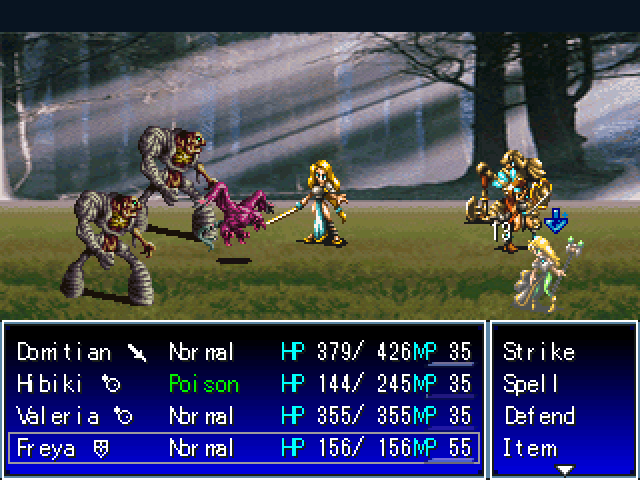 COMBAT. I liked combat in this game for different reasons: first the encounters are most of the time visibile and entirely optional, even if doing a good quantity will get you some advantages (the special trasure chest, present in most locations) but farming is not necessary at all. Second, every character receives experience, even those that are not in the party. Third, there are three classes: Striker, Balance or Passive. Each one has a different way to obtain the Mp necessaries to use the different skills that are obtained by equipping different gems. This is a note of merit as the creators implemented an original and interesting system.
Difficulty is medium, I noticed having a hard time only with ending boss and with the optional fight (nearly impossibile). Most of combats are balanced, while some bosses are harder but still manageable. The only problem is that the action bar fills too slowly, but that's my only complaint.

Oh and no save points! You can save anywhere so this makes the game perfect also for newcomers, as this make things easier. 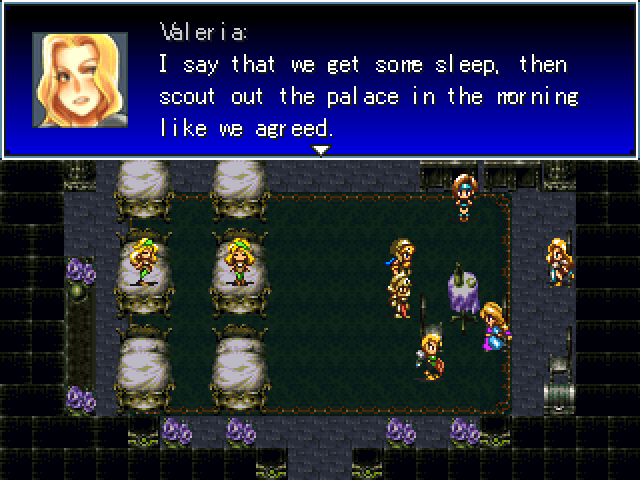 In the end this is a really nice game. I'd give a 3.5 if this was not a story chain game, but this is not the case so I think that the effort done by the authors deserve a 4! A pleasant surprise.

Thanks! I've a soft spot for Rmk2000 & Rmk2003 games! Unfortunately I missed the "golden age" but I'm trying to find and play less famous games.
Anyway thanks alot since reviewing in a language that's not my native isn't that easy sometimes!
JIHAUS

I think a large factor in what made our chain game different that really took it that extra step further was that we didn't really treat it like a normal chain game, in which each person made a piece and they were connected together or put in sequence. Instead, whoever had the game had full control over it and could do whatever they needed or wanted on any part of it, with no real limitations. At the same time, we didn't impose restrictions on how much or how little work each person could do on their turn, or the amount of time they needed to work on it.

On paper that sounds like the recipe for disaster and drama, but our team worked well together and communicated constantly so it ended up working effectively. It was also efficient, as whenever the game was in the hands of someone who couldn't work on it (RL interference, etc) they could easily just pass it to someone else. As a result, every time someone added something, they could also go back and change, adjust, rewrite, or re-balance previous parts to ease the transition. On the few group projects we can work on nowadays we do still make games this way, though being able to do so really depends on having a good team.

I'm also happy to hear that you enjoyed the battle system as that was probably the most experimental element. From the feedback we got, the game tends to be on the hard side but it sounds like you did just fine. That's the part of the game I spent the most time on as far as balance and testing so it's always satisfying to hear that it paid off.

Anyway, once again, thanks for playing and thanks for the coverage!
Ocean

And yeah, the way we worked on it meant people like Jihaus could fix my attempts at making the game easier, or if someone wanted to focus on the gameplay parts and put in placeholder maps, I could go in or someone else could go in and touch up the maps!
TheRpgmakerAddict

author=JIHAUS
Instead, whoever had the game had full control over it and could do whatever they needed or wanted on any part of it, with no real limitations. At the same time, we didn't impose restrictions on how much or how little work each person could do on their turn, or the amount of time they needed to work on it.

And it worked very well as I played other chain game but this was the longest and best one I found!

author=JIHAUS
From the feedback we got, the game tends to be on the hard side but it sounds like you did just fine.

Well I had no problem at all, I got all the chests and I think this was easier that most other Jrpgs I played, not the easiest one, but I remember I had problem just with a couple of bosses (in the middle part, one is after the camp of the pic I posted) and with the ending fight... but I was able to finish it and I'm not a hardcore player.

author=Ocean
Thanks for trying it out!

Well I played it to the end, so it was a good game with a perfect length and pacing. I also think that the game is good as it is now, no problem at all!
Pages: 1