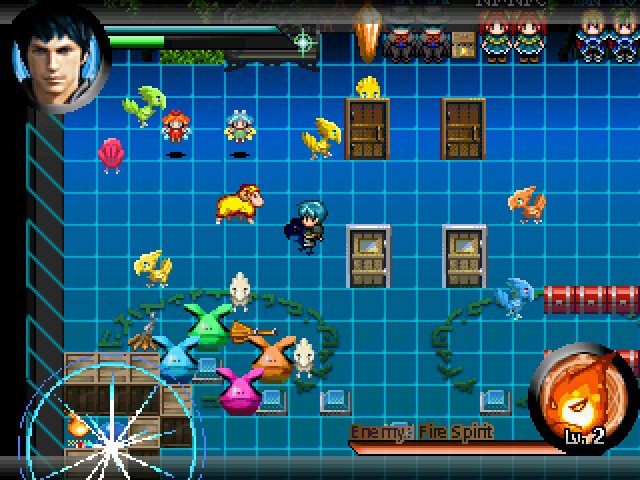 Introducing...Chocobo Mounts to the world of Eden Gate!

Close
09/21/2012 05:24 PM
@Clareain: Haha it is my debug room after all! I'll be showing more in the coming weeks of the actual game world but I want that to be a bigger event than just a screen shot =]
Sauce

@Ashes: Yes indeed my brother but it's been vastly improved since last time you saw it! I can't tell you all the things that have been added since then...too many to name =]
Ashes of Emerald

Close
09/22/2012 01:42 PM
@Ashes: You're pretty good and mostly got it, I've added more dynamic events since the last time so it is busier and I've also re-touched some graphics so there is a distinction there as well but the main hero also now has several new animations (Context-Sensitive and generic) and there are many new modifications to the mechanics...monsters can now be burnt, frozen, shocked...spells also affect monsters in various other ways; wind magic will send enemies flying, weather also affects all elemental spells now...lightning magic does a lot more damage if it's raining while fire magic not so much, the character even says spells now (KH voices modified to fit the character) and the animation has also been lip-synced with what the character is saying, ton of new items such as a smoke bomb and several new charms...you can use things like a love potion to affect disposition and even buy desired items for lowered prices. The list goes on lol but I'll save the rest for videos!

I'll try to have a demo out some time by the end of the year brother =] Thanks for the interest as always!
Ashes of Emerald

Close
09/22/2012 04:44 PM
I literally have no clue of what's going on in this screenshot? I mean there's some chocobos, a golden sheep, random doors, three sets of twins, chests, a broom.. All within some kind of VR setting!?

This is either madness or brilliance. Which ever it is I still somehow like it.
Lotus_Games

@Tau: Thank you haha. I'd be happy to explain each since I've pretty much shown everything you mentioned at one point or another.

-Chocobos = Mounts you can rent with their unique abilities separate from other mounts.(More details to come in time)

-Golden Sheep (Grunty) = Summon-able. One of the several types, Golden Grunty is the (thought to be) rarest of all Grunties. He comes with his own unique abilities, one of which includes a constant speed boost (Other types are fueled by feeding them carrot sticks). Rumor has it there is a glitch in the system which allows for an even more rare Grunty. This Grunty has never been seen before nor has it been sanctioned, however glimpses of hacked code suggests it's existence. Abilities unknown.

-The doors come in 4 varieties.
Door 1: Regular door...always open
Door 2: Lockable door...can be locked at night time, needs a lock pick to break into.
Door 3: Magic door...needs a spell cast on it to open.
Door 4: Magic door with lock...needs both a spell and a lock pick to open.

-The treasure chests: Dynamic common chests that contain items within them based on location. The chests reset when the player leaves not only the map but any given/specified area.

-Broom: A mountable broom which hovers. The broom is summon-able using your ocarina. It can be used to pass safely over traps (hidden and not-hidden) and can also shoot weak bubbles for long distance attacks (Good for pulling enemies into an ideal environmental location)

-The VR: My debug room =]
Ashes of Emerald

Yes sir!!!! I got my google thingy activated and my first post with it ever was on your site!!!![
Lotus_Games