Not enough time for a long gaze

The Abyss is a short game, an exceedingly short game, probably about 10 minutes in total. In truth the only reason I played it was because JosephSeraph was wondering if he had the energy to source and repack this game (the developer only provided the .rgssad file as a download so no .exe, .ini and more importantly no audio files) and I decided to take up the challenge after SegNin's effort had gone the way of the dodo. I'm not 100% sure the first theme I provided is the same one as the one the developer intended, but since it is the one playing on the title screen and given I only had the theme name to go on I had two probable candidates to choose from so I went with the one I liked better.

The game opens in media res, the demon lord Vetis, who is apparently the good guy for a change, quickly dispatches the army of dark skeletons sent against him by his foe Zeefaron, and then engages Zeefaron in single combat, which takes slightly longer to accomplish than taking out an entire dark skeleton army. After a few cutting remarks Zeefaron is consigned to the Abyss with the rest of his troops and Vetis can rest easy, except a mysterious bridge appears and control of the game is handed to the player. Crossing it leads to the second of the missing MP3's and a short exposition screen giving some reasoning behind the actions of the 'hero' and the story thus far. 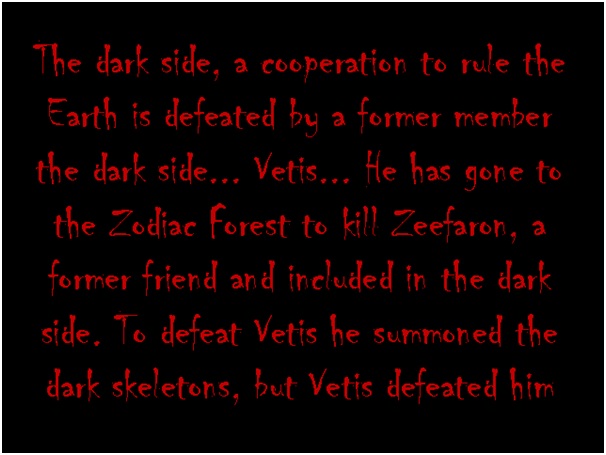 Yeah, I know. I just did that.

So Vetis ends up on a red hued floating atoll, plays leapfrog with a gryphon and then takes a conveniently appearing teleport portal to the next screen map in the hopes of finding out just what is going on. After being told he's somehow walked across a wooden bridge into the Abyss rather than having to go via the usual method of dying to get dispatched here (unless it's all a trick and Zeefaron actually won the fight and this is Vetis's mind trying to comes to term with his own mortality...nah, too complex for a game of this calibre), you have a word with the Wisdom Eagle who sends you to have a chat with a bloke called Ski and you get to the meat of the gameplay. It's basically a fetch quest with crystals! Though to offer a little variety rather than the standard four we have to find five instead, ooh, exciting. Though I must admit I do find the completely deadpan responses that Vetis defaults to pretty funny. Mysterious bridge appears, I'll just cross it, jumping jack gryphon, sure thing, unnecessarily complicated fetch quest for generic crystals, ok then.

There are some issues with polish in this game, or more precisely there is no polish on this game. Multitudes of spelling and grammatical errors, dialogue boxes cutting off text, passage and mapping inconsistencies, not to mention very bland maps, but you know what, this was made in 2007 and is one of the earliest games on the site, and the developer is Bahraini so I'm going to cut it a little slack in the professional level department. 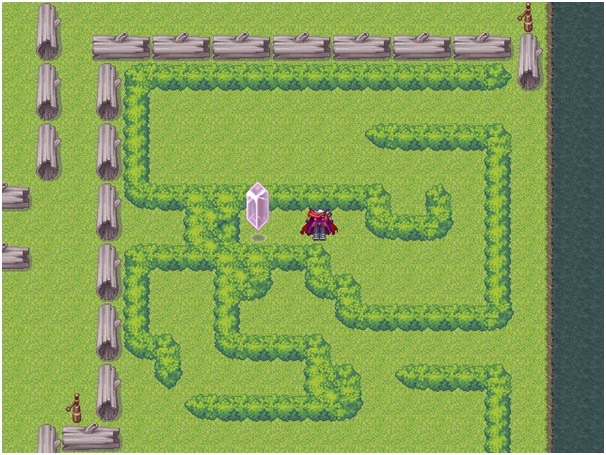 A maze is much less of a challenge when you can walk through the shrubbery.

The method by which you obtain the crystals is different in each of the dimensions you visit, in some it's a case of flip a few switches (though don't flip them twice, Sacredlobo found a glitch that changes your sprite into a switch if you do) and/or wander past the obstacles (or occasionally through them), answer a couple of questions about the story thus far (refer to the first screen shot for most of them), or take a wild stab in the dark in regard to a riddle. Expect to get a few game over's for wrong answers since the questions can be interpreted in a number of ways so save before you enter each dimension if you don't want to have to repeat yourself.

In the end after getting the crystals, four as it turns out after all, the Wisdom Eagle isn't so wise, but then what do you expect from a abyss-dwelling demon, you're teleported back to your starting point, and that's it. No final words of triumph, you're just left wandering around the starting screen with no indication there is anything beyond this point. You know that wild theory about actually being dead and stuck in the Abyss because of it is actually looking more plausible at this juncture.

I would have rated this game much higher if I thought that was true, but it's pretty obvious that isn't the case and once again it's a lack of polish or even attention to detail that leaves you having to blunder around blindly until you trip over the event that ends the game.

I can't recommend you grab the download link in my game-page comment to anyone, unless you feel like ticking the 'played one of the older games on RMN' off your bucket list. Otherwise don't bother even looking into this abyss, let alone gazing.

Close
07/21/2015 11:49 AM
"No final words of triumph, you're just left wandering around the starting screen with no indication there is anything beyond this point. You know that wild theory about actually being dead and stuck in the Abyss because of it is actually looking more plausible at this juncture."

While, I'm not surprised you didn't find the exit. Since, I found it by sheer dumb luck. There actually is away to end the game when you get back to this point. If you interact with the water in the top right corner of this map it will cause the game to end and Vetis will comment on how interesting his adventure was.
nhubi

once again it's a lack of polish or even attention to detail that leaves you having to blunder around blindly until you trip over the event that ends the game.

and 'That was interesting' said in what I can imagine is Vetis's standard droll tone isn't what I would consider a word of triumph.

It just comes down to no polish and obviously no testing. Not just for the 'look Mum, I'm a switch' error you caught but the ones I did when I was looking for the MP3's for this.

Still it's got 2 reviews and a LP out of it, so the dev (if they ever return) can't complain xD.

Edit: though that screenshot does raise a question, if those are the dark skeletons of the Abyss, why didn't Vetis run into any of them on his trip through there?
thesacredlobo

I'll chalk that up to mostly skimming through this review. Though, at least this game doesn't have the extensive list of problems that Tribal Stance had. Though figuring out how to play that game correctly was a pain in my backside.

"though that screenshot does raise a question, if those are the dark skeletons of the Abyss, why didn't Vetis run into any of them on his trip through there?"

Who knows. That's like asking why this game is classified as a RPG if the game lacks any sort of combat or leveling system.

"Still it's got 2 reviews and a LP out of it, so the dev (if they ever return) can't complain xD."

And, that will be three reviews soon since I've been working on a video review for the past hour or so. Though, matching the clips up with my dialogue is a bit of pain since this game is so short.
nhubi

Close
07/21/2015 02:08 PM
This thing is going to sit on the buzzing games list for way longer than it deserves at this point.
thesacredlobo

I still have a few Let's Play on the docket to get done as well. And, I tend to keep those on a set schedule just to avoid getting inescapably behind.
LilSnowflake