"Stickdude Goes to Hell" is a game that was slapped together in a hurry for a one hour contest. As such, the game really isn't going to impress anyone in terms of it's length or depth of character. After all, how much character development can you really cram into a game that can be beaten in under three minutes?

Sadly, there are a few issues when it comes to launching this game. For starters the download is missing a pair of files. These files are the harmony.dll file that needs to be in the main folder with the launcher as well as an image for vehicles in the CharSet folder. Thankfully you can simply copy the harmony.dll file from another game that uses the illegal version of RPG Maker 2000. As for the vehicle file, I simply recommend copying the image found in the monster file, renaming the duplicate, and then moving it to the proper location.

Outside of the missing files, you'll also probably need to tell Windows to launch the game in a smaller screen resolution. Or at least I needed to and my monitor is only 1920 by 1080. Thankfully this issue is pretty easy to address in Windows by right clicking on the RPG_RT.exe and selecting properties. Next you need to click on the compatibility tab. After that you need to mark the checkbox next to "Run in 640 x 480 screen resolution". And finally you need to click on apply.

Jimbo's supposed to stop right in front of Bubba, but you can actually move him during certain sections of the opening conversation.

I'm not sure if I should be amazed or dumb founded by the fact that this game includes a game breaking bug despite being beatable in under three minutes. You'd almost think that would be impossible.

As for how you trigger this bug. All you need to do is move Jimbo during the opening cut scene. If you don't return him to the position he ends up when his default movement track stops in front of Bubba. Then he won't be in the proper position to follow the final set of movement commands that the developer programmed him with. As a result Jimbo will either end up hopelessly stuck on a wall or will return to the entrance early. Either way the game will forever hang due to Jimbo not being able to complete the full series of steps that the developer had programmed him to follow. 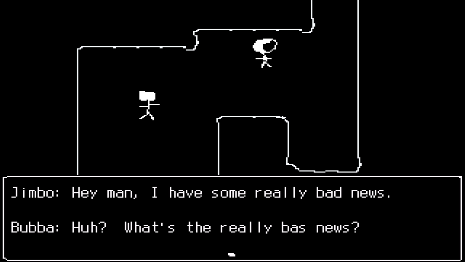 "Stickdude Goes to Hell" is a short game that shows us just how much his friends truly cared about him in life. In other words, they simply call it "bas" news and decide to go to the movies. After all, there's no point in worrying about a guy who was killed by being hit in the back of the head by a loaf of bread in a motorcycle accident.

"Stickdude Goes to Hell" largely centers around solving a rather simple maze within a set time limit of 666 seconds. Of course, you will be challenged by demonic cats/really badly drawn devils during your efforts to navigate the maze. Of course, this is made rather pointless by the fact that you can readily run away from anyone that challenges you. Add in the fact that you don't really get any tangible/worthwhile rewards from fighting. And you have absolutely no reason to engage in combat what so ever. Though, I suppose so might feel the need to channel their inner Chuck Norris and just have to roundhouse kick a devil or two.

Alas, while I'd happily give this game a higher score if it didn't contain a game breaking bug. I can't deny that it does include one. As such, I feel obligated to lower this game's score accordingly. After all, I really shouldn't cut corners on my rating system just because a game is short.

Regardless, I will admit that this game does have a simple sort of charm. Though, I suppose it's hard not to have a certain sort of appeal when your game's art looks like it was drawn in MS Paint by a bunch of five-year-olds. As such, I can't help but recommend this game if your looking for a simple distract and are willing to put a little effort into setting the game up. Though, I suppose many might find that to be a deal breaker.