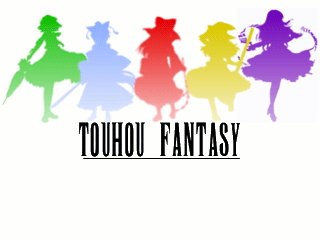 One for the fans

What the heck is a Touhou?

I see this question quite a lot, so it's worth getting out of the way...
Touhou is a long running series of games for windows and PC-98 made by Japanese indie developer Zun (aka Team Shanghai Alice). Most of the main series games are "bullet hell" shooters, with a couple of fighters and a few odd games thrown in with .5 numbers.
Zun's terms are quite generous, it's even allowed to make commercial games using his characters (with some restrictions). So there's a lot of fan works out there, and Touhou was quite popular on the Internet a few years ago.
If you want to know more about a character, searching for their name + touhou is informative. But beware, while the source material is PG, lots of the fan work is NSFW.

The game comes as two downloads, a main game and a music pack. There are lots of opportunities to switch on the extended music in-game if you download it later.

The game opens with an introductory cutscene setting up the story. It is skippable when starting a new game, which is welcome as it's easy to wander into overlevelled content and get wiped out.

The initial party consists of Reimu (A Miko, or shrine maiden), and Marisa (An ordinary witch). These are the main characters who feature in all the main sequence games, so not surprising to see them here.
Reimu has been cast as a cleric type here, with heals and holy element attacks.
Marisa has been cast as a thief type with a steal command and often finds extra items in chests and passively in battle. This certainly fits the Fanon.

Your first mission (or stage, perhaps?) is to visit the human village and to go pay Patchouli a visit. This is a very typical Touhou plot - beat up the usual suspects until one of them points you in the direction of the real culprit.
The human village has a tutorial room that explains the element setup of this game, which isn't entirely typical.
It also contains what looks like a tutorial side quest to clear out the ratsfairies from somebody's basement. But this resulted in both characters being one-shot killed.

You find early on items which are just named "P" or "B", a reference to the power-up and bomb items dropped by enemies in the shooters.

Onward to the Misty Lake, which is not so misty today (this could be because of difficulty making fog effects in 2k3, but it gets a plausible in-game explanation). This follows the stages of Touhou 6: Embodiment of Scarlet Devil, you have to cross the misty lake to get to the vampire's mansion. Unfortunately we can't fly this time so we have to find a path around and use stepping stones.
There is a hard path and easy path offered, which seem to differ by the number of enemies in random encounters.
Beyond the lake is our first boss encounter: Fan favourite Cirno and her buddy Daiyousei.
Touhou games are all about the boss fights, and this one doesn't disappoint. Cirno is the Strongest Fairy, which is a bit like Yogi being smarter than the average bear, and pelts you with ice attacks for low damage, while Daiyousei spams heals.
Take out Cirno first, and Daiyousei will just revive her with 50% HP the next round. Take out Daiyousei first, and Cirno gets an enrage buff that makes those ice attacks actually hurt.
Not bad for a stage one mid-boss.

The music is a mix of rips and fan arrangements of Touhou tracks. The world map has the post game cutscene music from (I think) Imperishable Night, and any map resembling a stage has some version of that stage's theme as its background music.

Character graphics in combat, I think are from one of the fighting games. The special attacks have been animated using sprite rips. These aren't lazy rips, a lot of work has gone into making the animations look good. (If it was eligible, I'd consider this for the "best use of rips" misao)

Unfortunately I experienced some lag and unresponsiveness entering commands in combat. Not sure if this is 2k3 struggling with the large animated sprites or something else.

There are over 1000 maps in the game directory, and the Scarlet Devil Mansion is big enough to get lost in. The quality of the maps I saw range from "quite good" to "mediocre". As this project has been several years labour, I imagine the developer's mapping skills have improved over the years but only some of the maps have been reworked.

Lots of in jokes, references, and the voices of fan works. If it's your first encounter with the media, it might be confusing. Fans will probably enjoy it.
Playing the original games won't be enough to get all the references.

Some of the random encounters are problematic - Kedama that appear in groups of 5 and cast 50 turn paralyze 1/3 of the time? Stunlocking the player with disabling status effects is not much fun.
Boss encounters at least seem to have some thought put into them, if you hit them at the right level.
Playable characters each have a unique command, which is nice, and different roles as well as their element.
In general the game mechanics are standard ATB battles with random encounters. Running out of MP can be an issue as most characters are weak with physical attacks, and MP restore items are rarely found (though you can stock up on "B" in the human village).

Touhou fans should check this out, or people looking for a big game to get stuck into. Without that universe to back it up, it's a little bit of a generic 2k3 RPG, but it does that well enough.