Exile Journey.
This is a game that looked good, but when I saw all these beautiful maps I wanted to try and see if the gameplay was as good as the rest. Well, you will find the answer soon...

It's curious that this review for Exile Journey comes after the one I did for Path of Exile... anyway let's begin:

The Good
Classic. This is how I can define this gem: the game is an epic classic fantasy adventure with good knights, evil demons, dark elves and a wise wizard!
But our protagonist is not the usual hero, it's an exiled knight that now is also a bard and sorcerer (and, as you know, like any other jack of all trades, he's no more than decent in combat!). The story is nothing new: evil sorcerer summons demons and tries to conquer the world, the realm needs help and our heroic outcast decides to take the sword and do his part. As usual we have a colorful cast of characters that will join him, from an overconfident dragon-slayer to a mysterious dark elf, it's worth noting that while these characters aren't particularly original and seem rather generic (a mage, a warrior, and elf etc...), they are really well characterized by several dialogues and exchanges that enrich the story. 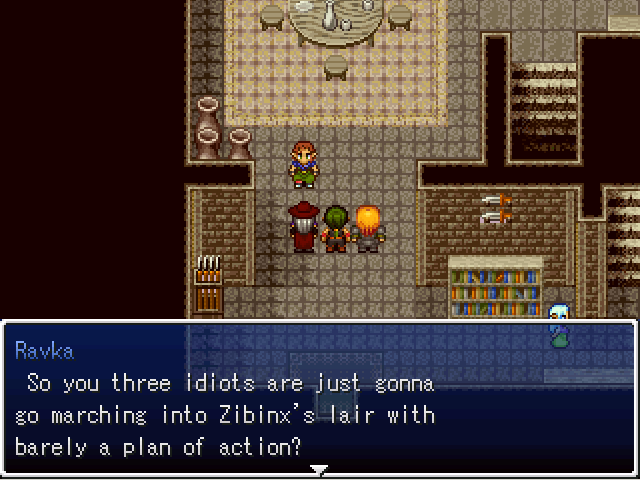 Sorry, Ravka, but this is our strategy AND this is what usually heroes do!

Ok, let's now talk about graphics: I like the resource used in this game, while most of the charsets are just RMP or edits, they look good as they all use the same style and always match the facesets (if I am right these resources come from the Vip_rpg site). But what is great is mapping: while the dungeons and interiors are nice but nothing special, the outdoor areas are especially well made and enriched by details like wandering animals (like butterflies and birds). I also found no problem when I had to recognize an access or find a particula place.

I like a lot music too, because the author did not use the typical themes already heard in many other fantasy games but he opted to use some songs from epic metal albums (oh well, I recognized a couple of these!), and I think they fit the concitate moments in which you will hear them.

Last, but not least, the gameplay! I said that before and I will say it now again: classic. Besides the dialogues we have exploration, puzzles and combat.
Exploration and puzzles can be described in the same part: basically we ofter have to avoid traps, find useful items, keys or lever to unlock doors and proceed. Anyway the enemies will makes things difficult, not only with guards and roaming monsters, but also with traps and some enigmas and timed sections that are, luckily, not too hard but still an interesting diversion.

Combat is the usual side view battlegrounds with nicely animated battlers: you have a team of characters with different skills, for example Kniryk has some magical attacks and songs that produce different effects. Enemies have different resistances and weaknesses (for example dark elves are resistant to fire damage) and it's helpful to exploit them in order to win the battles. A nice feature that was implemented is the indicators of opponents hitpoints and magic points, so you can clearly understand which enemy is weaker and prioritize your attacks against them.
I found difficulty rather medium, bosses are instead sometimes quite difficult to beat but hey, these are the big bads! I liked a lot the fact that there are no random encounters, every enemy is visible and sometimes avoidable.

Another nice feature is that save points also heal the party, so it's rather convenient using them to avoid spending too much money on potions, and considering that enemies respawn when you re-enter the map, you can exploit them to grind if you feel undervelled. The author was also quite generous with the save point number and placement and expect a save point before each difficult combat or challenge. 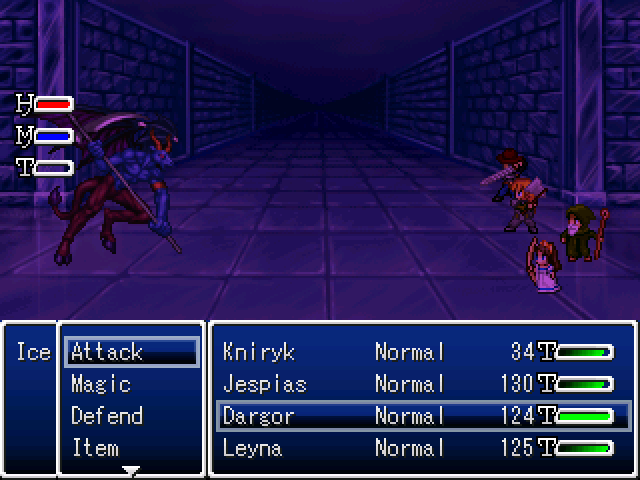 Combat is classic BUT this time you can also see enemy's energy and mana!

The Bad
The game has some little bugs that are worked on even as I speak: nothing game-breaking at all, just some adjustement that will improve the experience.
I cannot also find any serious flaw, my only problem is that it's a really classical fantasy adventure with few surprises and diversions. Even the monster sprites aren't different from the usual I've seen so many times... but despite the lack of originality this is a solid game!

Verdict
Exile Journey is a good game if you're looking for a simple but well done fantasy adventure. Graphics and mapping are what I liked most, and the difficulty is well calibrated, and while there are no special minigames or particular surprises, the game is well done and the enigmas and puzzles aren't frustrating at all. The story isn't particularly original or special, but the characters are interesting and the dialogues are quite well written.

Ok, this is my opinion, and I think that 4 it's well earned, anyway I'm pretty sure that a sequel will be even better!

Close
02/09/2020 01:46 AM
Thank you for the review! I greatly enjoyed making this game, so it makes me happy to see others enjoy playing it! I will take everything I learned from making this to make my future games even better. I appreciate your support.
TheRpgmakerAddict

Close
02/09/2020 02:54 PM
Annnnnd I greatly enjoyed playtesting it! I admit that there were few flaws and little errors, and I see that also these small nuisances were corrected, anyway it was still a good game at the time, before these improvements.