Hello everyone, XBuster here with a progress report on the game so far. There is actually quite a bit to talk about this time around. Today, we will be discussing the updates as of late 2016. Lets get started!

A while back, I introduced the new inventory system that was able to hold up to 96 items. However, this game is planned to only carry 64 items as seen below. Ranging from simple healing items to key items that will help you progress through the game and even unlock secret areas. 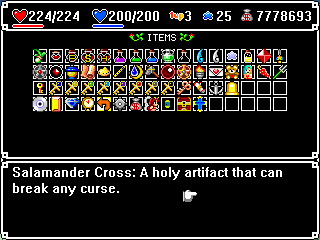 The equipment is still being worked on, but that doesn't mean they aren't planned out. I've narrowed it down to the most important items in the franchise. Rather than just giving each piece of equipment a status boost only, some equipment will have their own skills as seen here. In Monster World 2: The Dragon's trap, there was a special weapon called a "Magical Saber" that could transform star-marked blocks into solid blocks. 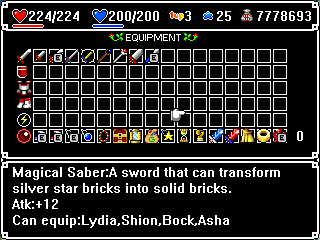 The Monster World games always provided a way to blend 2 aspects; Platforming and Combat. Though I am trying my best to combine the two, I've noticed that some areas have poor enemy placement and not enough battles with multiple monsters at one time. Along with that, arcade elements have been added in the game as well such as food appearing when you are near their spawn points. Character move sets are fixed, but you can enhance/upgrade their effects.

For example, Lydia's fireball can be used underwater or Kiki's guns will shoot faster. A level system was also added. I'm not sure if going to lv.99 is necessary, but we will see. Difficulty settings were also introduced including the Hard, Extreme and the extraordinarily difficult setting of "Monster". Easy mode is planned and will have bonus effects.

New magic has also been added/tweaked such as the healing spell and the shield magic as seen in Wonder Boy in Monster World. With the shield spell, you will take no damage at all as long as the shield is active. However, it breaks easily. Its defense and HP can be increased via Skill Grid though. Summons have been added as well. Some of them are timed, while others will accompany you until a certain point and help you attack enemies.

New monsters have been added! Within this series are hordes of monsters that range from snakes to dragons to slimes and much more. Basically, classic RPG monsters and several unique ones. Believe it or not, there are a whole bunch of monsters from every game in the series all the way up to Monster World 4. Examples include a bull, muck monster, elephant, vulture, lamia(new), and much more! 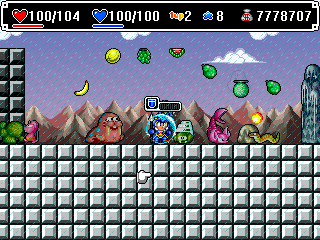 In order to make this game to give you a feel of growth, a skill grid was introduced. This will give you more control over what global stats to increase and what character skills can be enhanced. Examples of Skills are... 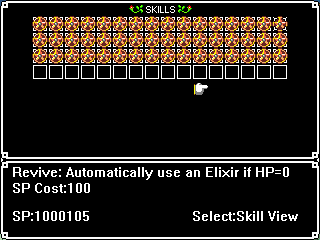 As if this game didn't have enough to deal with, there is an alternate version of the classic: Wonderboy in Monster World known as The Dyanstic Hero. Originally, I thought this was just the same game with a main character change. Turns out it was the same level layout, but the NPCs and boss monsters changed! What did this mean? Time to rip of course! Within the game there were new resources such as artwork and anime-styled imagery.

Along with getting new resources, Another character update has been added. I won't showcase them all yet because I want them to be a surprise. But, if you look below, you will see Lydia's new appearance/battle stance. Kiki is our ammunition buff, who not only uses futuristic technology, but also has a variety of gun types similar to Mega Man. However, this was based on the Arcade game; Wonderboy 3 Monster Lair.

Bai is an all-round powerhouse with a speed disadvantage, but she can crush golden blocks that no one else is able to break. Ferkin is a magic maniac with the ability to control some elements. Every attack he does is magical. Ryou is the only character that can do a combo attack with his twin swords which leads to him being the fastest attacker of the bunch, but his HP will decrease at fixed intervals until a certain item is acquired(it may be in this blog somewhere). Lydia is the well rounded character that has the ability to kick certain walls and control basic to advanced level magic. Glaedr is still in the works. 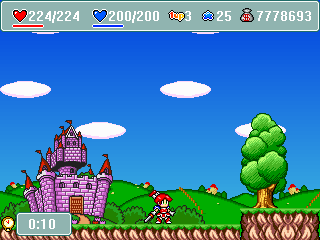 Remember way back when this game began to get options? One of them was Records. Before, you had to go to a whole entirely different room to view them. However, now you can view them on the fly by entering the menu and selecting status. The menu has heavily expanded and even has pages now. 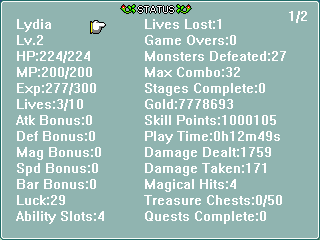 Remember the last demo before the current one and how it had a brief story mode showing what it would be like if a story was added? Since the main focus this year has only been the gameplay/fixing/tweaking/scrapping/enhancement, there hasn't been much time to work on the story mode. Although, I have many plans for this game when it comes to its story. I'll leave it at that.

When is the game coming out?
The game is very large and I'm working on this alone with the support of other subscribers' characters on the line. With over 1000 resources from the entire history of Wonder Boy/ Monster World and original content, its only expected to take a while. I want to finish it this year, but it may be set to Q1 of 2017.No, I'm not attempting perfection, but I do want it to fulfill my image and make it the very best it can be.

Happy 30th anniversary Wonder Boy! I look forward to the 2 new games coming out officially, and other fan games coming out as well made by fans such as myself. Speaking of which, here is the newest trailer for Monster Boy and the Cursed Kindgom. Enjoy! If you have any questions whatsoever about the project and its future, please feel free to comment or send a PM.