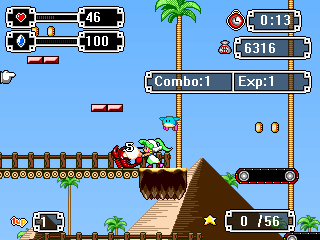 toiling away in the makerscore mines
2754

I'm glad to hear it! There is lots to look forward to in the future. Hope you enjoy the current version until a brand-new polished one comes out.
HikiNeet

Close
04/07/2016 04:03 AM
Oh boy, I just remembered that conveyor belts aren't a very good place to fight on--for the players that is. They force you to move so you can't stay still and hack away at the enemies on them with melee attacks or you'll get pushed into said enemies or--if they're situated over a bottomless chasm--drop you to your death (or is this one of those games that just make you lose a chunk of HP instead of instant-death?). It's likely that a boss of the mechanical persuasion is fought on platforms that solely consist of them (one way to trick up the player is to reverse the direction of the conveyor belts every now and then. You're moving right on a conveyor belt (that is moving left) when suddenly it shifts right and the momentum throws you right off and into a pit! There's likely gonna be an industrial world in this game where they're commonplace.

I suppose if you're feeling especially cruel, you can make switches that you have to hit with an attack/or step on to change the direction a conveyor belt is moving. The catch is that you would have to do it to progress because you need it moving in a certain direction. That would add a puzzle element to it? Though really, I'm just imagining a timed switch so you have to be fast about it.

Speaking of platform types, I suppose you'll also have slippery ice floors and those tiles that break/disappear a few seconds after you step on them (and reform a few secs later). There's so many potential ways to kill--I mean challenge the players.

Hmm, what do I remember from playing platforming games? Well, there's those mushroom platforms in Mario. The ones that shrink and expand so you have to time your jumps. If there's an enemy on them and you're also on the platform when it shrinks, you'll be getting some contact damage.


And I remember in Donkey Kong that the lightning levels are vicious since a bolt of lightning periodically strikes you every once in a while. You have to time your movement at the swimming sections 'cause you will get electrocuted if you're in water when it gets zapped. Both Mario and DK are also fond of chase levels where something invincible will relentlessly pursue you until you're dead. Both are also fond of vertical levels where you have to climb up since there's lava pouring up from the bottom.

Ones that really stuck out to me was the Low-Gravity and Wind levels. I suppose there's the Mine Cart levels too but I don't you'll probably make one of those.

Extrapolating from the Kaptain K. Rool battle, you could create an enemy that shoots poison gas that reverses the left/right keys to screw with players. Mushroom enemies could do that and it'd make the Mushroom boss interesting to fight.

Also, enemies that can hurt the player with their death are nice and serve as reminders not to let your guard down even if you kill them. Enemies like robots could have their bodies explode a few seconds after you defeat them, damaging you if you don't move away in time. The particularly nasty ones can not only explode but also release shrapnel projectiles after the explosion so you're still not safe even if you avoid being blown up.

Adding to the possible mechanical world, you can't forget traps like lasers that periodically flicker on and off to make you time when to move through them. Mines are like bombs except dotted over the floor to make you watch your step.

Close
04/07/2016 02:51 PM
This really is some useful information:) Luckily for me though, a LOT of what you've said above is already in the engine. For instance,

1)There is a vertical level in the game called "Lava Pit" where lava does rise.

2)In space, there is a low gravity, and a gravity-change level where it switches your gravity based on the area. This level concept was inspired by the Mega Man Zero 4 stage where gravity panels make you jump higher or lower.

3)I have been thinking of doing a wind stage, I just need to figure out how to stop the player near a wall when the wind pushes them.

4)Why didn't I think of a conveyor switch Sooner? Good thinking

5) Yes, there is an industrial/space world in the game. Its called Neo Utopia. Most stages in this world are elemental such as Fire Factory and Frozen Facility.
There are many traps in this game, so many I lost count. Lasers, Lava, Bombs, Spikes, Fire Sticks, Arrow Shooters, Poision Smog, Heat, Blizzards, Boulders,Quicksand,Cannons, Motion-Sensor Bombs, and much, much more.

6)There are no fights on conveyor belts in this game because those are precise platform sections, but it would be pretty evil to do so.

7) Yes, there are slippery Ice floors in the game that break after being on them. They will crack and explode into ice chunks.

8) There are a couple of enemies that have desperate death attacks. One is a mummy that throws two knives in both directions and an egg-bomb that explodes when it contacts either you or an attack.

9) I'm currently brainstorming how to make you get shocked underwater. I have made you die when you touch lightning underwater, but not the way it works in real life. I'll look further into it.

10) Funny that you say that, I do plan on adding a mine cart level, they are already complete actually. There is a level in the Sky World where you ride a mine cart to progress.

11) I do plan on adding another chase level. I just recently got a giant boulder that is big enough to squash you. That is definetly something in consideration.

Thanks for your advice, I'm picking up a lot of things from you. Ever since I changed the physics of this game, its gotten better, but there are a lot of things I have to remake now. We'll see how things progress from here on out.