To start, it needs to be noted that Boutalles was made as a 2 week contest entry. Everything except the tilesets and icons was made within those 2 weeks. Now, I take into consideration the context and apparent intention of the project when I review it. That doesn’t mean that I should ignore unpolished sections. However, it does help me understand what I’m getting into.

Boutalles focuses almost exclusively on gameplay. And while there’s a lot to be said about it, I’ll start with the other elements first.

Three mercenaries are commissioned by the royal chancellor to bring back a black blob. They succeed. The end.

If that sounds like I’m not doing the main plot any justice, I’ll say that I just described everything there is to know about this story. Is that a bad thing? Well, not really. Much of the game’s dialogue is spent mocking itself and its inconsequential plot. 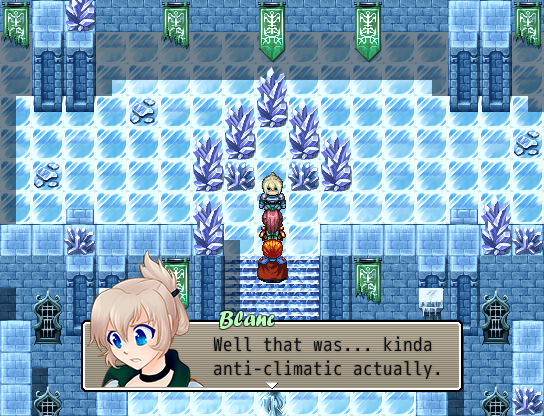 This story doesn’t take itself seriously, and neither should you.

Now, this might not make much sense, but it was actually the writing that encouraged me to play the game beyond the intro. Specifically, the dialogue was entertaining. Boutalles manages to establish several running gags, despite the short narrative.

After a brief false intro, you’re introduced to your party: a trio of self-centered, glory hunting, money grubbing mercs who manage to charm you with just a few lines of lighthearted humor. Considering that this is a short game, it’s important that the characters grow on you quickly.

The artwork by Krisanna is downright gorgeous. The character designs are fantastic. Admittedly, I took notice of Boutalles because of the portraits, and they don’t go to waste as just concept art on the profile. The expressions from the character portraits play a big part in both characterization and humor.

The mapping is not as notable. The dungeons are linear. The only town in the game is plain. They’re about as plain as this excerpt. I… really have no other way of describing them.

Boutalles features a CBS centered around a combo system. Combinations of inputs trigger skills, depending on class and skill assignment. The game allows you to assign any combination of inputs to call a given skill. Since as many as 9 skills can be triggered from a single set of 5 inputs, the combo system actually feels like you’re stringing together a combo.

The ability to arrange combos is actually the most important part of the system. Skills either consume stamina or tech points(which are accumulated by using nontech skills) to activate. If there’s not enough stamina or tech to use the next skill in the chain, the combo falls apart. Therefore, a critical phase in battle prep is the organization of your skill combos. 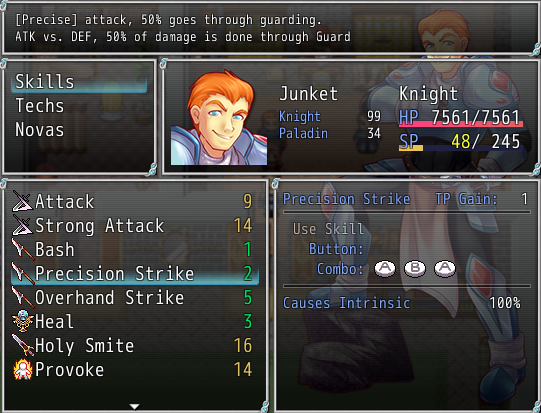 Gotta use that Holy Smite to debuff Precise damage before using that Precision Strike.

Combat is conducted 1v1 between a single enemy and the party’s leading character. While this may not sound like it involves much teamplay, the quick character swap and combat skill mechanics allows for unique team tactics that traditional RPG parties normally don’t facilitate.

Actually, Boutalles could use a battle tutorial accessible from the menu. At the very least, the ‘combat refresher’ at the beginning should be repeatable. The combat system has a lot of moving parts to keep track of.

Boutalles offers 10 unique classes to choose from, accessible by all three party members, and they can be changed at any time from the menu.

However, ’10 classes’ is misleading. Each character can choose a sub class to go with their main class. Though sub classes are level capped at 50% of the active main class, all skills, stats, and equipment perks from the sub class are usable. By a certain level, it’s essentially two active main classes, and that increases the variations exponentially. For example, a soldier with a priest subclass plays substantially different from a soldier with a thief subclass or a soldier with a mage subclass. Depending on his subclass, the heavily armored soldier can either heal, use attack magick, or dual wield from just the start up classes available.

The effect of class selection compounds further when used in conjunction with the rest of the party. Certain classes have skills that buff or debuff for big attacks on other classes. These skills can be matched together on a single character or by utilizing the fluid character swap. Experimenting with class combinations and team chemistry was by far the most addicting feature for me.

Other than its combat, a prominent feature in Boutalles is its synthesis system. There are not actually any new items being made. Instead, synthesis allows you to take enchantments from one item and put them on another. Synth materials are gathered in dungeon, carrying randomly generated enchantments. Though simple in nature, the system and its enchantments are surprisingly deep. 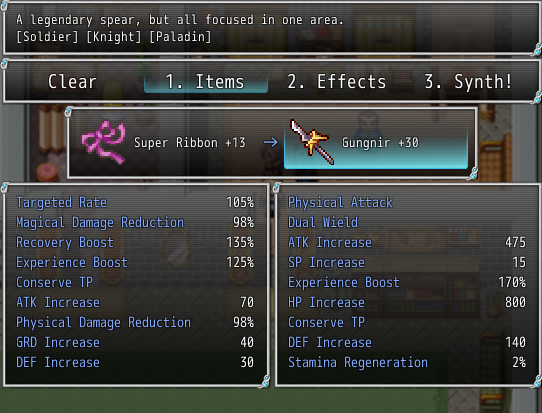 I said it was deep.

The synthesis system has its share of problems, however. The original release was plagued with game crashing bugs, but I understand those have since been fixed. What’s still there, however, is the ability to exploit the system. For example, the player can apply a permanent stat upgrade to a stack of 10xpudding, use 9 of those puddings to boost stats, before transferring the stat upgrade to a fresh stack of 10xpudding. I’m not sure how difficult it would be to implement, but I would suggest that only one pudding gains the effect from the synthesis.

The tone of Boutalles is lighthearted. Easy going. Appropriately, the game allows you to play how you want to play. Aside from the class and skill customization, you’re able to alter the enemies’ levels instantly from the menu. The game is only ever as challenging as you want it to be. Death in combat, including boss fights, only results in retreat from battle.

I found the combat, class and synth systems addicting to play with. The characters are likeable, which helped me get excited about customizing them. Honestly, those mechanics deserve a longer game. In the end, the lack of effort put into the story could have ruined this game for me. However, I do understand that this was a 2 week contest entry.

author=Adon237
Oh this game was a very enjoyable one, and the intro was downright hilarious!

I loved that intro. Too bad it's kind of an 'inside' joke for the RM community. : )
Anaryu

author=Sauce
One piece of feedback I failed to mention in the review: inputting combos required very irregular timings. As far as I could tell, if your inputs were way ahead of the skills being triggered onscreen, the next input would not register. Or maybe it's while the extra skills are being called? I'm not entirely sure.

So if I hit a combo like A, B, A, B, A... but I hit it too fast, it might appear as A, B, B, A... because it failed to register the A while the combo was catching up. Obviously, if I hit it too slow, the combo resets. I'd suggest to allow the full sequence to be inputted regardless of where the combo is at.

Then again, the irregular timing forced me to memorize the rhythm of each combo, and maybe that's a plus, instead of a negative.

The rhythm was the goal, I didn't like how most often when I could "combo" in games the rhythm basically became spamming as fast as you could, and I'd been playing a lot of fighting games recently (especially the Vita version of BlazBlue.)

However I think that overall approach hurt it's accessibility, so those that were willing to learn it got the idea, but it limited how they could play and turned a lot of people off.

In the revised system I worked on for a while there wasn't even combos anymore, you just assigned a skill to a button/direction like A+Up, then when you held in A you could hit up/down/left/right to use the skill, like this:

The idea we've been throwing around the most lately is actually to do something like Secret of Mana in 3D (I'm actually pretty good in Blender and Unity these days) with chibi-style characters (but keeping the faces/art still of course!)

Something more cartooney and soft-textured instead of realistic. Currently building an alpha test to see how it feels.
Sauce

One piece of feedback I failed to mention in the review: inputting combos required very irregular timings. As far as I could tell, if your inputs were way ahead of the skills being triggered onscreen, the next input would not register. Or maybe it's while the extra skills are being called? I'm not entirely sure.

So if I hit a combo like A, B, A, B, A... but I hit it too fast, it might appear as A, B, B, A... because it failed to register the A while the combo was catching up. Obviously, if I hit it too slow, the combo resets. I'd suggest to allow the full sequence to be inputted regardless of where the combo is at.

Then again, the irregular timing forced me to memorize the rhythm of each combo, and maybe that's a plus, instead of a negative.

As for the characters, I'd love to see that party again, in any fashion.
Adon237

The characters really grew on me and I was kinda sad I didn't have time to do more with the story.

I certainly don't want this to be the 'end' of these characters or the game, I did a bunch of updates to the combat and planned out some new dungeons, but we're still thinking about the approach and working on new ideas (maybe not even RPG Maker...) just because it was a fun and light-hearted experience that, as you so aptly put it, didn't take itself too seriously. : )

Glad someone enjoyed it, didn't get a whole lot of feedback (though I think a few more comments than usual.)

To be defensive about one thing though: "The original release was plagued with game crashing bugs, but I understand those have since been fixed."

There was actually only one bug, the game would crash when you started synthesis with an item with no attributes and selected and tried to synth the empty attribute to an item. Other than that fix it hasn't been changed. Was just very pronounced because I didn't give a Synthesis tutorial, so people often started by playing and trying to synthesize blank stuff. : )
Pages: 1