If Nessy is to be believed, and why wouldn't she, this game took less time to make than it did for me to play, review and submit it. It's not because it's long, it isn't. From start to finish it takes about 7 minutes - most of that in the battle sequence, but Nessy states on the game page it took 25 minutes to make. It took me that long to play and then think of how to word my thoughts in this review.

I do have to disagree with the opening statement made on the game page. This game isn't crap, or if it is it's more in the craptastic sense than the faecal one, because it is very pretty crap, and actually, irritatingly has a hook.

Set in a dying world Terra tells the story of two best friends, Echo and Noise, and aren't those names a dead giveaway, as they discover the truth behind the destruction of their once beautiful world and decide to follow a classic alpha male scenario and die valiantly against overwhelming odds, after the prerequisite heartbreaking farewell to a beloved but oblivious family member. 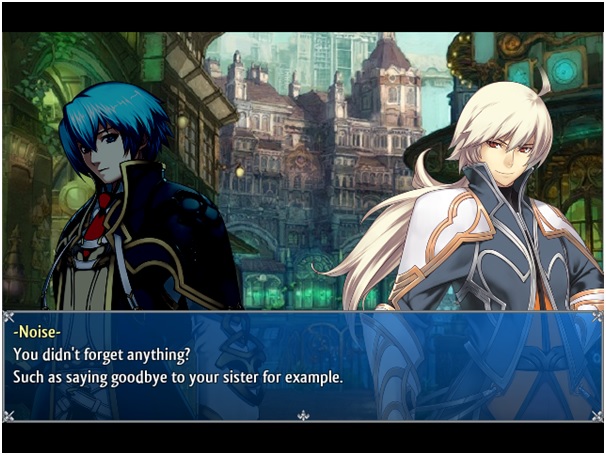 Told you it was pretty.

Nessy obtained all the visually stunning background images used in this game from various and sundry sources around the net like munashichi, Lsltmr & Hirokiku as well as the character busts for our two protagonists and Echo's sister Rumina from Mana Khemia 2. But you know what, that really doesn't matter. The game was made in less than an hour for the nugget crash course and as Nessy states unashamedly in the final moments it was really only made so she could get the seriously cute snoopy badge from the event.

I'm not going to give this game a score because really it consists of two cut scenes, and one ridiculously difficult but oddly satisfying battle with the Harbinger, the friend-turned-villain of the piece and supposedly the reason that this world is succumbing to the mysterious rot. Balancing that battle was obviously something that would have taken more time than was made available, and it appears that time was more devoted to the quite inventive skills and items that you have available for the fight.

The sad thing about this game is though it is unbelievably short there is a definite sense of world here, a feeling of a rich and varied history that is being brought to an untimely end by an implacable enemy. Karins_Soulkeeper made mention of the game being cruel in the comments and he's right, because there is a lot of potential here, and this could easily be expanded upon to be an interesting game once flesh has been added to the bones already established.

I'm not sure if that will ever happen, but if it does I'd be more than happy to revisit Terra and help our valiant if doomed heroes beat back the Harbinger and save their world, and probably Echo's ailing sister into the bargain.

Close
07/05/2015 11:28 AM
Thank you for the review Nhubi!
I did have a serious lore for Terra. It was from a novel I had back in HS but I didn't think anyone would care or notice because of this short demo, so this makes me really happy. :D
nhubi