A retouch of Miserere

It's been quite a while since I touched anything related to gamemaking now, more than 2 years, I think? I've been focusing on only art. But I recently got a taste for doing something with my old games, especially when it comes to the art of Miserere. Some of the maps look quite dated, to be honest. So I thought I'd do my best to remake the art of the worst offenders while still trying to keep the original idea behind the maps intact. I might add some new creatures here and there just for fun, too. I've already started, and here are a couple of examples!

I might be a couple of years late to the party here, but I have made a poster (and t-shirt, if that's your thing) of the iconic theatre scene. It's really one of my favourite scenes in the game, so I thought I'd blow it up huge and do something with it.
If you're unsure what I'm talking about, it's this scene: 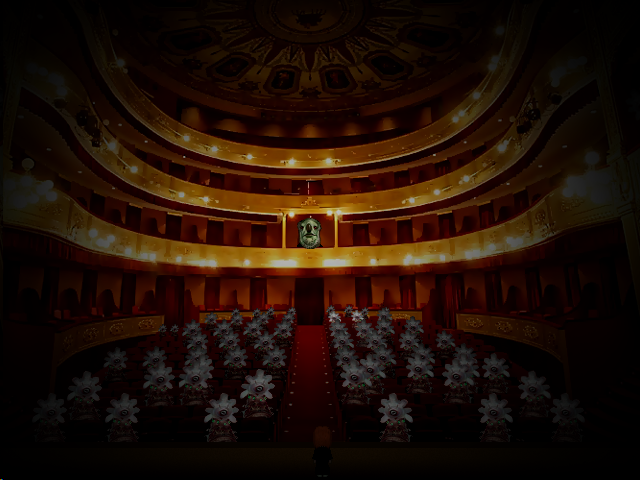 If you're interested, you can get it here: Redbubble shop
Have a great day!

The very friendly Sycreala contacted me a while back and asked for permission to translate Miserere into Chinese. Naturally I accepted, and today he sent me a mail telling that the translated version is done.

I also recently got sent a Spanish version of the game by Konzard, which can be found here:

Some text in pictures may not be translated in the spanish version.

The very friendly Sycreala contacted me a while back and asked for permission to translate Miserere into Chinese. Naturally I accepted, and today he sent me a mail telling that the translated version is done.

Thank you everyone that downloaded and played Miserere, and made me keep working on it with your wonderful feedback and suggestions!
In light of Miserere getting featured I thought it would probably be a good idea to upload the actual last version of Miserere to the site.
I've had it up on my personal site for a couple of months already, but I just forgot to change the link on rpgmaker.net. Shame on me, I guess? Mostly bugfixes and changing around some annoying stuff in this version, so don't worry if you already played last version.

Some people requested it, so here is a not very reading friendly walkthrough (wrote it while I played through Miserere once). It should be a good help if you get stuck though.
walkthrough

The final release is done. Everything that I set out to put into the game is in there.
A big thank you to everyone that have helped me by playing Miserere and giving feedback.
Changelog: v1.02

I've got a few bug reports after roughly two weeks of people playing the game.
This update should take care of most of those bugs.
Apart from that I made some small additions and minor visual changes.

Ladies and gentlemen, I have completed Miserere v1.0.
I would be lying if I said that I'm not super excited for this.
It's really been quite a journey, even though it's just been a little less than a year. I've really gotten a lot of helpful critique and positive feedback from this game, more so than i could hope for. Thank you to everyone who have played earlier versions and who will play the completed game, which you might have helped shape in some way.
Also a special thank you to Papasan96 for proofreading.

Download should be up when the submission gets accepted.