Black Shadows is the first game by XRazorBlackX.
This can be defined as a sort of horror adventure, with dialogue, some action and real time shooting combat. The setting is a sort of modern or near future, and our protagonist is Evan, a demon hunter that works for an organization named STP.
Ok so we begin with Evan in a sort of post-apocalyptic biker bar, waiting the instructions from his partner, Oriot. A simple premise for a simple and rather straightforward adventure, but a nice one (demons and hunters, blood and horror! What's better?)!

The Good
As I wrote the game is mainly a visual novel (most options of the menu like items and equipment management will be present but useless, and also the bullett function is not clear or important) you will spend most time reading the dialogues, but this doesn't mean that there are no activities: for the first half you will have some simple adventure tasks (find the key, find the keycard, etc...) and shooting minigames, then during the second part also a riddle and a section in which you have to avoid traps. There is also a final boss fight, that exactly like the other fights in this game, it is a real time shooting minigame (shoot the targets as soon as you can. Rather simple).
Difficulty is ok, you can save everywhere and I died just a couple of times. Once because I tried a rather stupid strategy during last combat. Well, I was "experimenting".
Music is ok for the most part but I wanted more of it. I also like the facesets, but probably since they are all similar and black and white, they can generate a bit of confusion (you can judge this by yourself, looking at the two screens I posted). 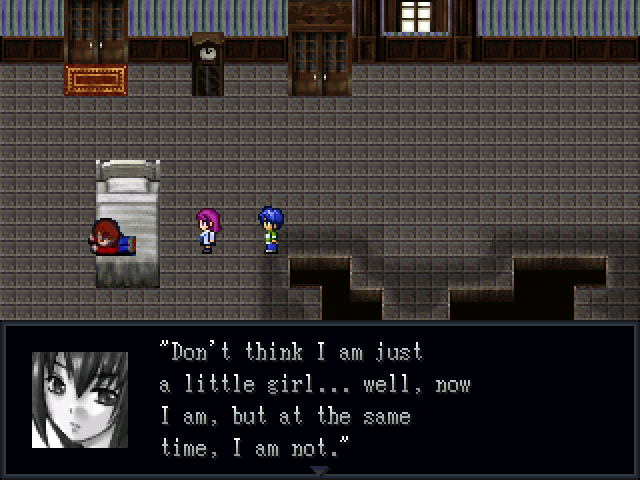 The Bad & the Ugly
Obviously, being one of the first games made by this author, there are some issues:

The game lacks of polish: mapping is mediocre, the rooms are too big (especially apartments and the train, outdoor areas are fine) and lack of details. It's not too bad since the places are supposed to be ransacked and abandonated, but... it could have been better. Also some items are odd, like some bodies with different style/proportion, some clipping issues in the train, and other imprecisions, that are not game breaking problems, but just a little nuisance. It's a pity since I like the style used and the general atmosphere. I also would have edited the charsets to make them less colorful and more coherent with the rest of the setting.

Also the story isn't particularly complex (there are just four non-generic characters involved) well explained: there are some things left unresolved or not explained, but no contradictions and the adventure is quite short, so it's passable. 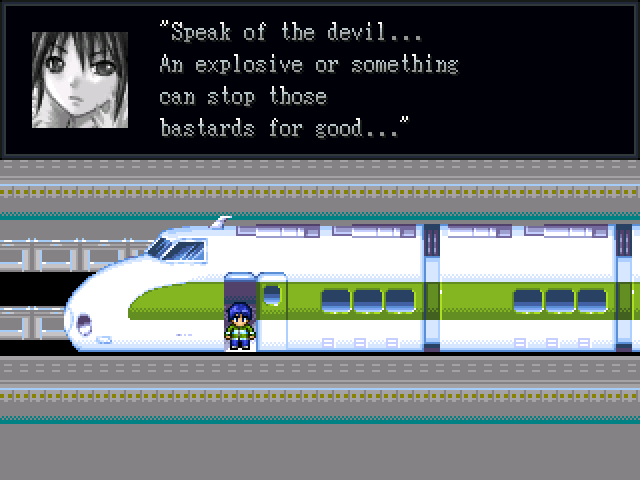 There is no problem that an explosive cannot solve!

Verdict
Being the first game, this is rather impressive and well done. There are some minor problems and lots of room for improvement in every department, anyway it's a nice game, with some charm and some clever and good ideas. I'd have wished some more cutscenes about the character's past and adventures, just to tell... no better, to show what has happened before (that would have enriched the story).
Anyway I recognize some good inspiration and original ideas: this isn't the usual jrpg setting, and this isn't even an rpg! The atmosphere of desolation and dread is also well done and I think that this game deserve even just a try.
In the end I had fun playing it and the story somewhat intrigued me from the beginning to the end.
So it's an average 3 out of five. Nothing exceptionally good and nothing exceptionally bad.