"When We Get Out Of Here, You Can Kill The Tension And Have Weird Angry Sex"

OR: Windiana Bones and The Temple of the Crystal Head 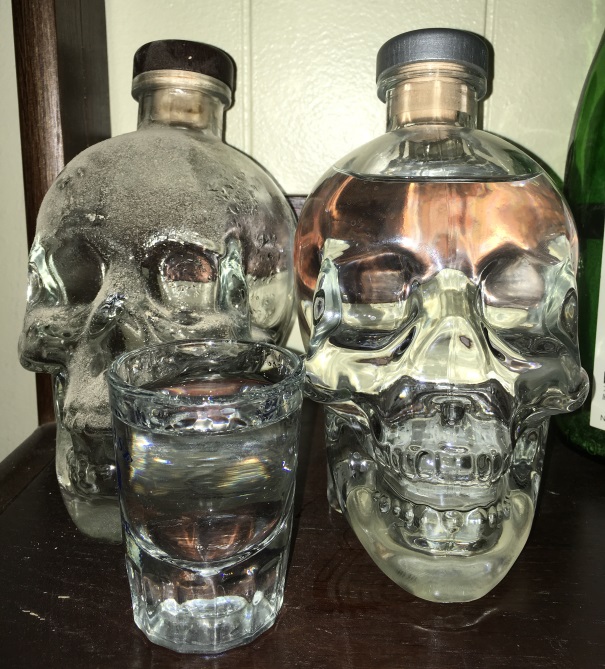 Greetings, I'm StormCrow and this review is brought to you by Vodka (as part of the Distilled Opinions summer Review Jam).

LittleWingGuy's long awaited Villnoire shows every sign of shaping up to be the best JRPG that 2008 ever made. The demo I played was also by no stretch of the imagination a "teaser". When I hear "teaser" in a video game context, I think of something that's 15 minutes long or less, certainly something that can be easily played in one sitting, not two or two and a half hours of playable content. This is a BIG demo, folks. Let's dive in.

Story
For the most part, I thought the writing, storytelling, and world-building was competent. The extensive testing shows in the absence of conspicuous typos (I only caught one) which I appreciated. I have a few specific, minor beefs with the game's storytelling, some of which fall under the heading of ludonarrative dissonance which is an eight syllable phrase game academics like to use that translates roughly to "nitpicking", some of which don't.

I thought the really heavy-handed use of emojii bubbles in dialogue was nothing short of severely distracting. It undermined the seriousness of serious scenes--in less serious scenes, it just made things drag on longer. With the prevalence of character emote poses (for things like surprise or thoughtfulness) the emojii bubbles were redundant at best.

I think the first time a proper noun is mentioned, highlighting it in different colored text is a good idea. I don't think it's something you have to keep doing every time a proper noun is mentioned. Like, I get that Inchor is a country, I get that these soldiers come from there, etcetera. BTW, I see what you did there, with the name ("ichor" is a word for a nasty liquid; y'just added an 'n' to it).

More substantively, I felt like the only particularly likable/interesting character in the game was Zach, the wise-cracking amoral self-styled "treasure hunter" with a casual attitude towards killing. Vivian was excruciatingly obviously NOT TO BE TRUSTED and was telegraphing her lack of trustworthiness with every line of dialogue. Lukas OBVIOUSLY knows that she's not to be trusted, but he keeps trusting her, picking up the idiot ball (and chain) again and again. It makes him hard to relate to. The residents of Granevelle (did I spell that right?) in the beginning we don't spend enough time with to really get to know. But for what it's worth, I loved Zach, which is why I titled the review with one of his lines of dialogue.

The game does an even better job of creating a truly despicable villain in Adray (although I gather he's not the main villain). From the precision deployment of the word "whore" in a game otherwise without a jot of profanity to his casually threatening to cut out a little girl's tongue (see below), the game does an excellent job of establishing Adray as a real piece of shit you can't wait to kill.


I think the overall premise (Druids/magic users vs. a militaristic empire) while not the most original is solidly set up and executed. I'd like to find out how this story ends one day.

Ludonarrative Dissonance and other nitpicking.
It actually means "when the gameplay disagrees with the story". But I'm also using this section as a catchall for my nitpicks on what I think is overall a very solid demo.

Action
This feels a lot like a SNES JRPG from the 1990s. I imagine that was what the creator was going for. Battles are well balanced (I didn't feel truly challenged, but I imagine that the tougher challenges are saved for mid-game and late-game content). There seem to be only two elements, light/holy and dark/evil, and the game plays around with that cleverly (Enemies names appear above their heads, color-coded to hint at their elemental weakness). It felt weird needing to cast Dark magic on an UNDEAD SKELETON that was somehow a creature of elemental light, but whatever.

Battles occur when you run into events on the map that look like little flames and change color and chase you when you get close. It's possible to avoid battles but in doing so you risk also avoiding the experience points and Fras (what a weird name for a currency) they grant. Initially I felt like using the floating flame graphic for EVERY conceivable enemy was kind of a cop-out, like during the giant ant boss battle, when the giant ant is just a floating flame like every other enemy, but I appreciated that the soldiers in Heimhold Keep looked like soldiers, even on the map.

Character advancement is via investing AP in an ability tree. One AP seems to be earned with each level. If Lukas is Level 2, he can equip two 1 AP abilities or one 2 AP ability. When Zach joins the party he's Level 4, so he can equip two 2 AP abilities, one 3 AP ability and one 1 AP ability, and so on. Certain abilities are paired together, and if a character equips them both, they receive a passive benefit (such as resistance to a certain damage type or a boost to attack). It seems like a really great system, with just enough depth to offer interesting strategic possibilities without being overwhelming. AP can be re-invested at each save point and thankfully save points are plentiful.

Quizzer seems like a fun little minigame. I got the answer to the question in Palmira Village obviously, but then again I've been knocking around this scene since before BlindMind even joined.

One area where I found the game lacking is that most map objects (shelves and such) didn't offer descriptions or any kind of interactivity.

Finally, the game keeps track of how many chests you've found in a given area, and awards you with extra...Fras...for finding all the chests. Obviously opening a chest is already its own reward, but this is still a neat mechanic for rewarding psychotic completionism in players : ).

Sights
This game features beautiful mapping with REFMAP/FSM tiles. The mapping is really exceptionally well done. There is no shortage of eye candy here. 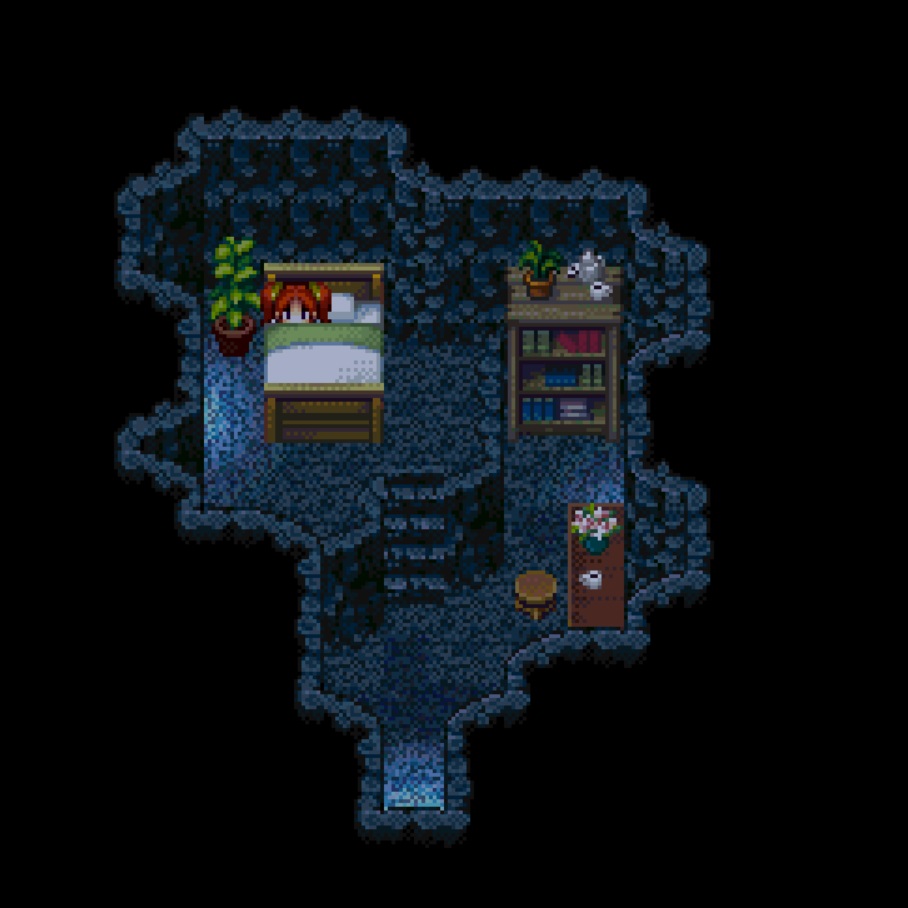 The FSM charsets nicely match the maps because OF COURSE THEY DO. Likewise, the battlers are nicely congruous. Finally, there was a lack of lighting overlays which I actually appreciated the heck out of. I mean I appreciated their absence. Most games that specialize in being pretty (and this certainly seems to fall into that category) have overlays out the behind, so I appreciated the lack of them here.

All of the characters have numerous emote poses as mentioned above, not to mention poses for being knocked down, sitting up, and so on. It's excellent, and gives off a nice FF6 type vibe. I do have a few complaints with the emoting poses, which is that it's a bit awkward how characters ALWAYS face down to emote, and that the surprise emotes are somewhat comical and sabotage the seriousness of some of the more dramatic scenes. Overall, however, these are nitpicks, and the emotes work.

Custom facesets/busts nicely round things out.

All GUI elements were clean and attractive in this reviewer's opinion. 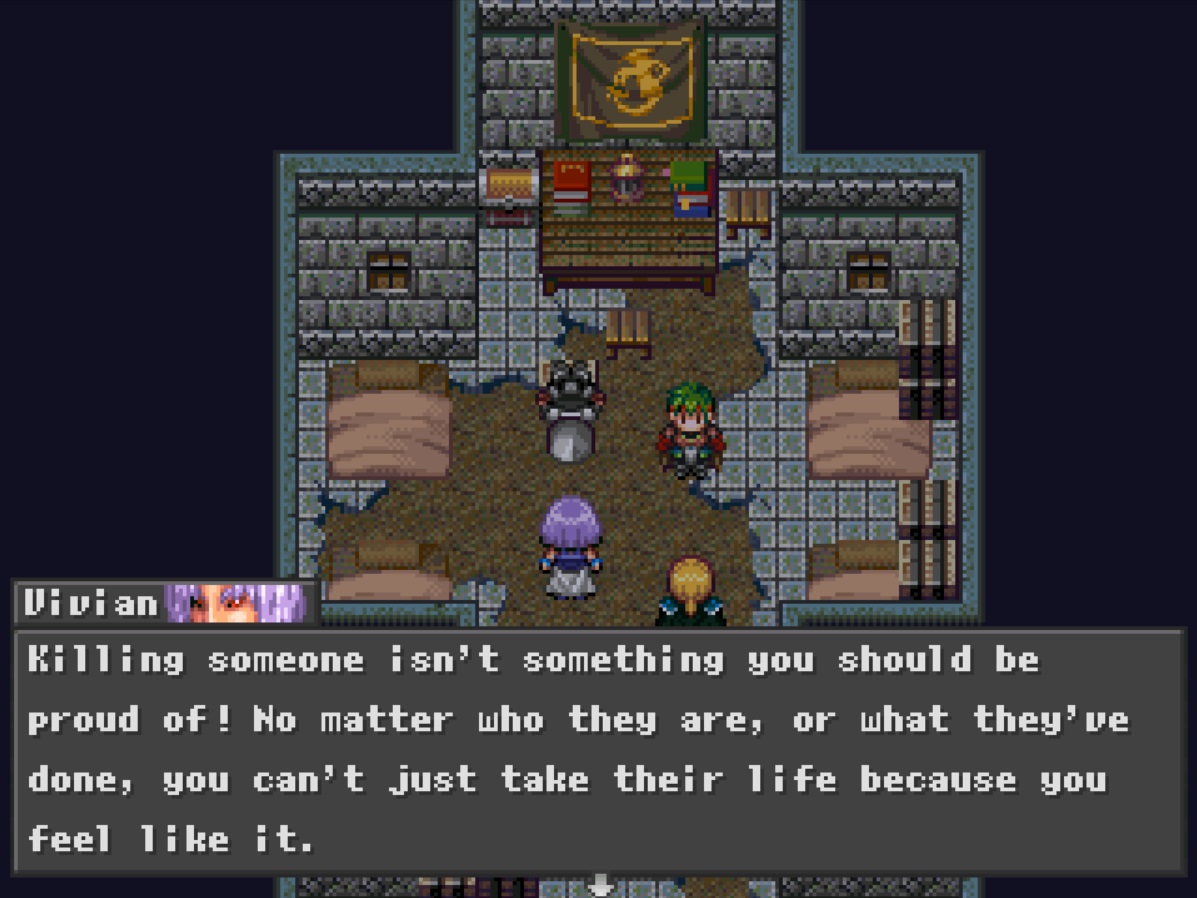 We're going to have to agree to disagree on that one Vivian, you compulsive liar you. I say these Inchor douchebags are magophobic child abusers (Adray threatened to cut out Emilia's tongue!!!) and we should bathe in their goddamn blood.

Sounds
This game has a complete custom soundtrack by the exceptionally talented Mr. Clayton Stroup. It is indeed a credit to Mr. Stroup that I assumed what I was listening to for the first half of the demo were rips from commercial games, before I checked the game page and found out about the complete OST. Sound effects were used well for the most part. The distinct sound of a portcullis being raised/lowered was used for opening ordinary doors in Heimhold, and that did annoy me every time it happened, but that's my only complaint with the sound design.

Final Thoughts
Villnoire has been in development for a long time and has a lot to show for it. The demo is polished and compelling. I'm excited for the full game, and you should be too. Ordinarily I go out of my way to avoid signal boosting anything that's already "buzzing" or on RMN's front page, because I think that those projects don't need my help, but I'm legit honored to be the first person to review this. Keep on keepin' on LWG, and get this mother finished!