Most promising demo I've seen in a long time

Demos are often a source of disappointment. Whether the full game is never released, leaving a small, hollow shell of a game, or the demo ends up being totally unrepresentative of the game's quality, there are a lot of times demos have disappointed me and many others around the world. This demo, on the other hand, is one of the most promising I've seen in quite a while, and it's hard to even point out any flaws with it.

These are some of the most beautiful graphics I've seen from an RPG Maker 2003 game, by far. It's all 100% custom, and it's all so good that you could easily mistake it for being ripped from a commercial game. The custom menus also managed to not look out of place, which was surprising. The only issue I could find with the graphics, even when actively trying, was that the layers on some tiles were a little odd, which leads to things like this. 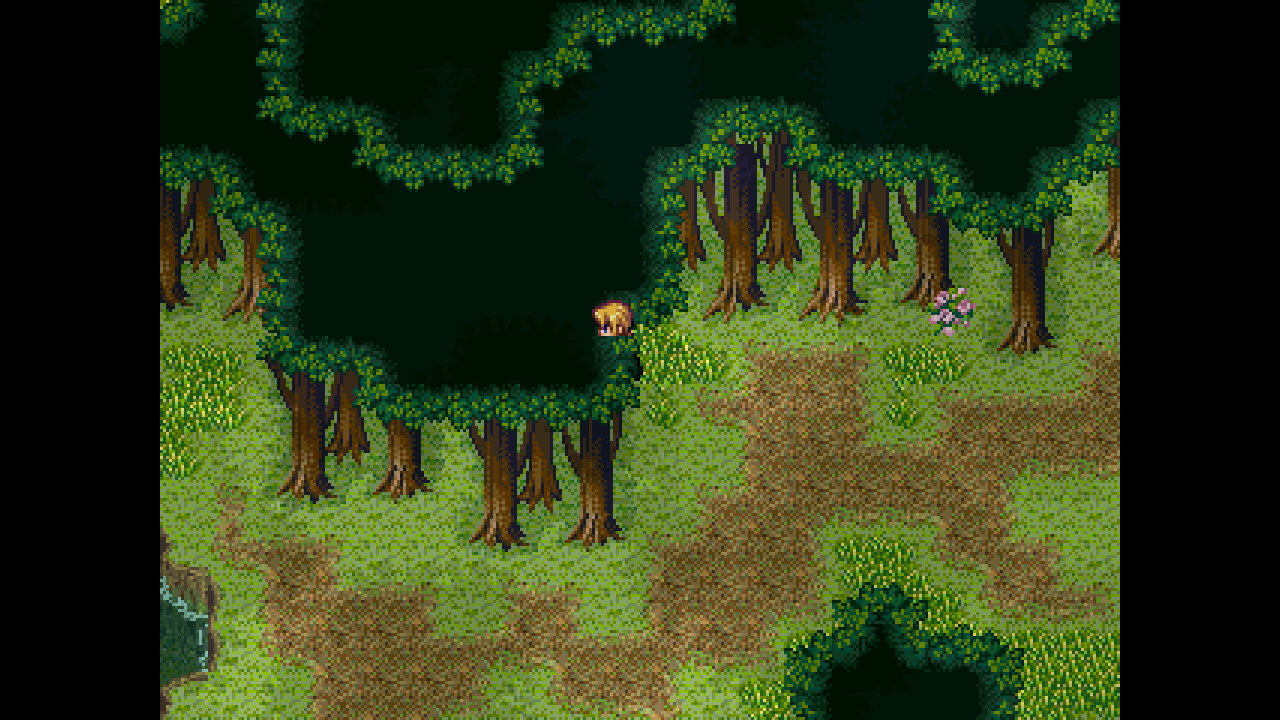 Pretty much everything about the sound in this game was perfect - the music was well-composed and stuck in my head very well, and the sound effects didn't disappoint either. There's honestly not a single thing I can think of that would be worth changing in the current soundtrack, and that's enough to get a 5/5. Once again, you could easily mistake it for being ripped from a commercial game.

The gameplay was another aspect I thought was very well-done. Despite being a fairly-standard DBS, it still managed to stand out with plenty of interesting game mechanics, especially for a demo. All encounters were handled with on-screen enemies, so there's no worrying about constantly being interrupted every two steps by another enemy, and there's another very helpful feature that shows you an enemy's element by the color of their name. Both of these were very welcome additions to combat.

There's also a cool system for governing how skills work, too - you gain one skill point per level, and can learn and un-learn abilities at any save point, while also gaining passive abilities depending on which combinations of abilities you learn. I feel like it wasn't used to its fullest potential during this demo, but it was a welcome change from just learning skills as you level up. There's also one battle feature I never got a chance to use - Overflow abilities. Once the game tells you they exist, every ability you use fills the Overflow meter, and you can use Overflow abilities at no cost once the meter is full. There were two issues with this idea - for one thing, there's only one dungeon you get to use it in, and overflow abilities also cost five skill points to learn when you're still trying to get together a basic set of skills and don't have five skill points to spare. Giving Zach an Overflow skill by default would have worked, considering that he's the one that mentions them in the first place, but I guess he just read about them in a book or something. It's a fairly minor part of this demo's combat, considering I didn't miss not being able to use it.

Mapping was generally done very well, outside of the aforementioned graphical issues, and makes for nice eye candy to boot. Even the events serve as eye candy sometimes - at one point, you're fighting guards in a situation where some of them have already been slaughtered, and any guards you fight will just fall unconscious without the pool of blood that accompanies the other soldiers, which is a nice attention to detail. In general, this game's gameplay was excellent, with only fairly minor flaws to speak of.

This is the lowest rating out of all of them, for a couple of reasons, number one being the characters. For the most part, they're well-written - Lukas is a little bit of a dick sometimes, but it seems to fit him pretty well, and Vivian serves her purpose as the mysterious girl who's definitely not telling the truth, but Zach just feels tacked-on. You could honestly have completely left him out of the story and nothing would have changed, save for the mysterious murderer's identity remaining unknown. In almost every conversation that takes place after his introduction, he's completely ignored. When I say completely ignored, I mean completely ignored - Lukas and Vivian don't even breathe a word in his direction in response to his constant complaining that they're ignoring him. He might as well be a silent protagonist.

Then there's all the typos. I feel like this is a little harsh, but I'm okay with it considering the professional-level quality the rest of the game had to offer. Some of the dialogue was alright, but there were plenty of minor and major spelling and grammar errors to go around, from random NPC conversations to plot events, and they do a better job of ruining tension and drama than anything else. 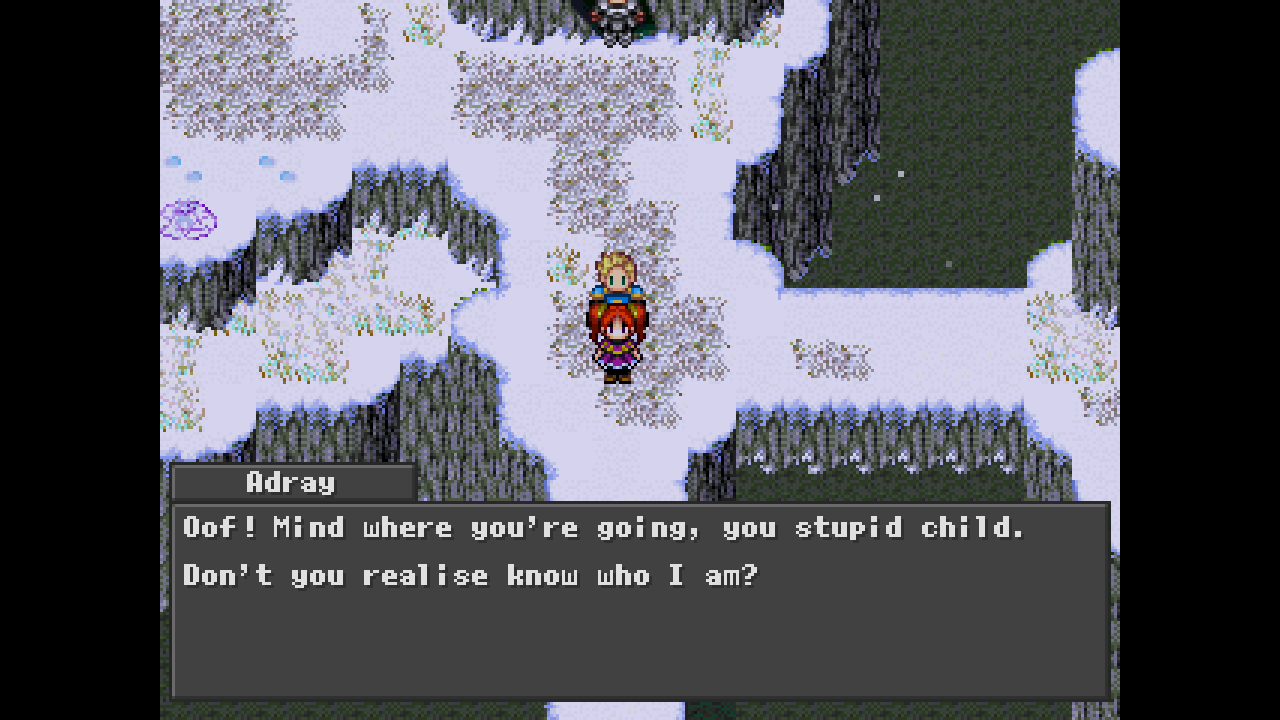 The villain loses a lot of his intimidation factor when he can't use the English language right. 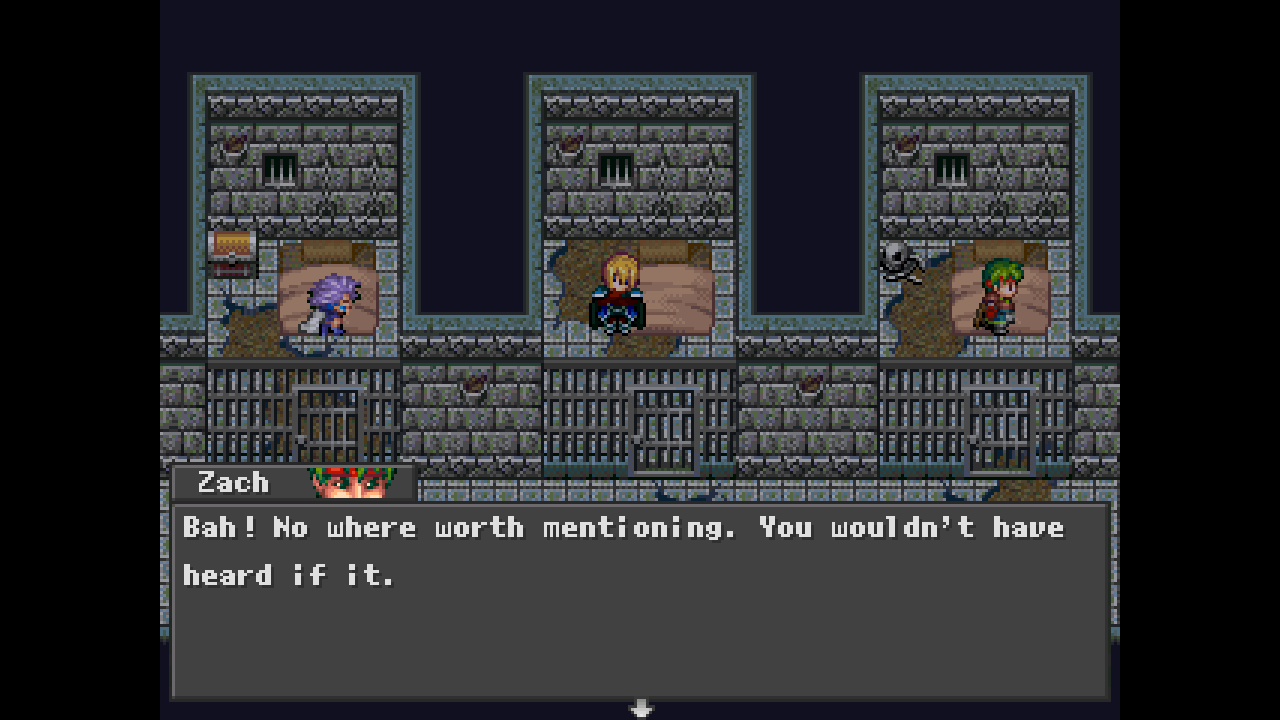 This is why some protagonists should stay silent.

Outside of the typos and Zach, writing was generally done well, and there was some tension and suspense about Lukas and Vivian's talks with one another. I've certainly seen plenty of games with much worse writing than this one, though.

Overall: 4/5 (not rated because demo)

Despite the issues I was able to raise up about this game, I'm eagerly awaiting any and all news about it. Even if the full version was released tomorrow with all these flaws in it, it would be the kind of quality I'd gladly pay for, and there's a lot of RPG Maker games in my Steam library that can't hold the same honor. I hope this project has more work done on it, and I hope this project ends up finished and sees release, whether it's freely-distributed or commercial.

Close
08/24/2018 10:20 PM
A bit of a heads up : The graphics aren't custom. They're from an ancient resource pack called First Seed Material, also known as Mac and Blue.
LWG did do a buttload of edits and reworkings though.
Roden

There is the odd pile of original pixel art scattered in the game, but I probably should have publicly addressed his points so it didn't look like I was quietly taking credit for the actual base graphics!
NovemberJoy
636