A great adventure and an emotional story

When I started Villnoire all I knew is that this was a fantasy adventure of a good lenght (about 14 hours), and apparently really well done. While this was true, there were many things and aspects that surprised me.

The story is about a conflict among the two main races: humans and druids. Despite the nearly identical appearance they are quite different, for example druids can use magic and aren't warlike as the humans. Our party will be composed by three druids and three humans (oh well they are the guys and girls in the main menu background, of course!), but I will tell later about them. The fantasy setting is unusually low-magic and low-fantasy (monsters are savage beasts, there are no mythologic or divine creatures and the conflicts are just among normal people! Well except for one particular case that you may or may not encounter. And I won't say more!) and the story is quite simple and linear, but really good, realistic and emotional, and it shows that it's not necessary to introduce magic and supernatural beings to create a nice fantasy story. It's very realistic and sad sometimes, people dies and there is no resurrection or miracle available, the world is a grim place but the heroes can make the difference. I won't tell you more about the story, except that it starts in media res, and then after a certain point we will start playing as Lukas in a long flashback.

Speaking about the heroes I liked a lot how they are characterized: not only they have different skills and abilities, but the cast is composed by interesting individuals, and while Zach is probably the favourite of many players because of his wild dialogues, each one has a deep personal story and interesting behaviours and beliefs.
While the characters are really deep and interesting, the bad guys lack of a certain "something", and they look a bit banal and shallow. Not a terrible thing but clearly they are not memorable as the rest of the cast of the game (I admit I expected some kind of sudden revelation or surprise about them but...nah, never happened). 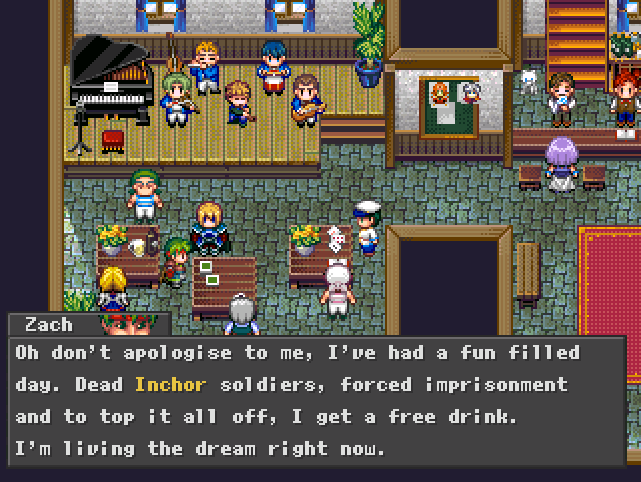 Some wise words from Zach! (oh I liked the music of this part, because yes, the band is really playing!)

The game is a classical Jrpg: there are dialogues, there is exploration and combat. And we have also some nice and simple puzzles to solve, nothing to hard, but some pleasant diversions. Exploring is always encouraged because there are hidden spots with loot (and no monsters) on the main map and each level has a certain number of chests that will grant extra loot, but you will also get a bonus for finding and opening all the chests of the dungeon or village, so keep your eyes open. But this is not all, because there are also some "shiny spots" that reveal the position of the alchemy ingredients.
Alchemy is quite simple, just find the alchemist and combine a bottle with a type of gel to create potions! Simple but effective!
Oh and besides the chests and the "shiny spots", in the villages you can also find the mysterious clown that disguise himself as some kind of item. He will ask you a question, and usually the answer is the title of another great Rpgmaker game (coincidentally 3 were among the ones I reviewed earlier, and others are some I am going to review soon! But no, I won't give you any hint), but do not worry he will wait until you give him the correct answer and then will give you something useful. Neat!
Not enough? You want more? Are you greedy? Well then you can search for a creepy gambler that is dressed like a cowboy. He plays a card game called Rebellion and it's another way to earn (or lose) some gold.

This game has no random encounters, every enemy is visible and avoidable, but do not relax until you have found a Save Point. Oh yes, the Save Points. Luckily there are many of them (and you can also save on the main map) but they are also useful for two other things: you can manage the party (only three slots and you cannot drop the main hero. Anyway some special situations will force you to use temporarily only particulary party members) and you can set the characters' abilities: in Villnoire you do not earn abilities but skill points that can be used to temporarily unlock some abilities, clearly you can unlock them all only if you hit the maximum level (20th... this will surely happen with the protagonist Lukas since he is always in the party from the beginning), but you can change the active abilities freely before venturing forth. This is especially useful when facing bosses, for example the giant scorpion in the desert is nearly impossible to defeat without the ability that cancels the enemy's buffs. But wait, there is more! Abilities are paired, and you can gets extra benefits when you activate a pair or more. 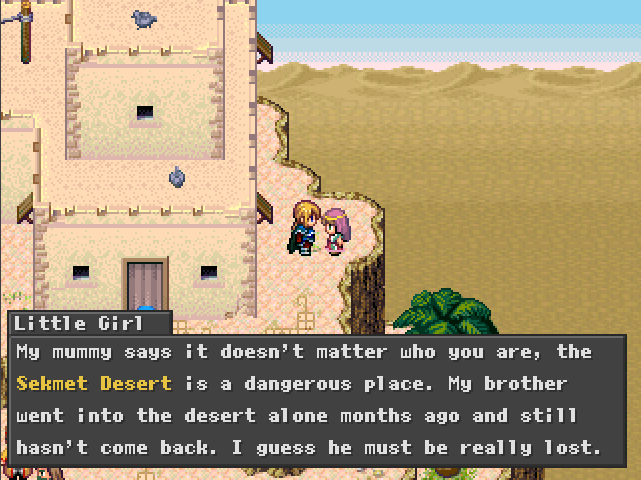 Combat is the usual ATB system, each character can make a simple attack attack (some weapons also have side effects like the ability to attack everyone, to cause statuses or are particularly strong versus light or darkness), use an unlocked ability or unleash the Overflow Ability. What is this? Simply a sort of "Ultimate Ability" that is different for each character (Lukas can replenish the ST points of one party member, while Reyson can heal all the party at once, and so on...) but can be used only when the Overflow bar is filled and filling it requires the use of Abilities (at least four times). Not that hard, unfortunately these Overflow Abilities are useful but not essential since there is no uber attack that will destroy the opposition.
I soon learned that it's helpful to look at the names of the opponents, since the color indentify the corresponding element: purple is darkness, white is light or neutral (some particular opponent even change element during combat).
Clearly attacking with the opposite element produces tons of damage, while using the same element causes exactly zero damage!

But hey, do not worry too much, combat in this game is quite easy (no need to grind, even if it's clearly possible since enemies respawn, except in last dungeon) and in any case, besides equipping better weapons an armors, you also can use some helpful badges that give interesting effects, like regeneration, the immunity to critical hits or to some statuses (and some statuses like Confusion are really dangerous when more than one party member is affected, so try to stock some antidotes to those harmful effects since they will be usually mantained even after combat), and you can also use Essences to permanently raise some stats of the party members.

Lukas isn't around so this time Bryce takes the lead!

Graphically the game looks good, it used the First Seed charsets (with many little animations and expressions that makes the different characters lively and expressive) and chipsets but also some original portraits and pictures that perfectly fit the style of the game. Mapping is good, every place is full of tiny particulars (like different harmless animals moving/flying around) but I also liked how each dungeon is different: one has key that unlocked different rooms, another has a puzzle that need the party to be split in two groups, the desert has the thirst mechanic. This game may be a simple, classic Jrpg, but there is a certain variety.
Sounds and music are also original and I found the quality rather high.

Verdict
Villnoire is a nearly perfect old style jrpg. It's maybe a bit too easy and has some little, microscopic flaw here and there, and some people may found the cutscenes and dialogues sometimes a bit too long (I also found the typo "he must aTTone...", but yes, for the most part dialogues are flawless) or the elemental system too simple, or the storyline too linear, but I think these are secondary aspects and minor complaints when the quality is so high and there is a great story and good gameplay, including many unlockables and secrets (there's a whole secret dungeon complete with an interesting boss). This game is really pleasant to play, never boring or frustrating.
I assure you that I felt inspired to completed it 100%, and it was a relaxing adventure, a pleasant journey and an emotional story.

When I reviewed Swan Song I wrote: "play Swan Song if you have no time to play Little Wing Guy's masterpiece Villnoire". Now I will just say "play Villnoire", because 4.5/5 is a vote that I seldom give, but this game deserves it.

Be you a human or a druid, TheRpgmakerAddict wishes you safe travels on the lands of Villnoire.

Close
04/06/2020 11:19 AM
It was nice to read a new batch of your reviews, Addict.
I enjoy your points, which are well articulated, and recommendation like this always makes me even more hyped about a game.
TheRpgmakerAddict

author=Cap_H
It was nice to read a new batch of your reviews, Addict.
I enjoy your points, which are well articulated, and recommendation like this always makes me even more hyped about a game.

Thanks a lot, I am a bit late with this review (wasn't able to play and finish it before the Misaos, unlike Theia but just because I played it one year before it was featured here), but better late than never!
Pages: 1