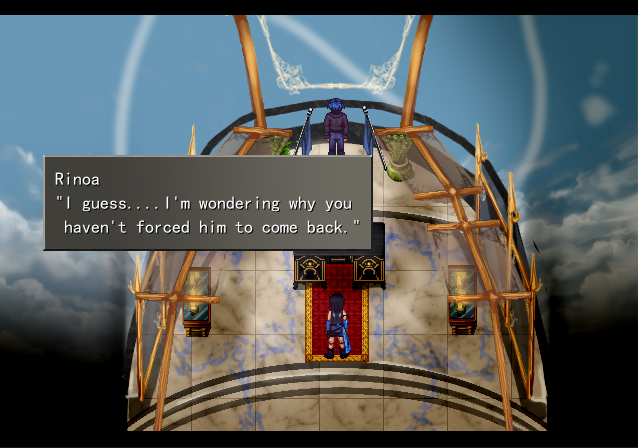 Close
04/12/2015 12:00 PM
The sprite for the man she is talking to is a placeholder since he's not designed yet (and I wanted to write this scene). His name is Dilan, and he's a critical character to the story-- basically when Garden resumed being a school, Cid hand-picked a new Headmaster to oversee school-based shenanigans and be a higher authority. He's a bit of an enigma, but in this scene you see he puts a lot of thought into his students, his decisions, and Garden itself, so the party (including Squall) have quite a bit of respect for him. 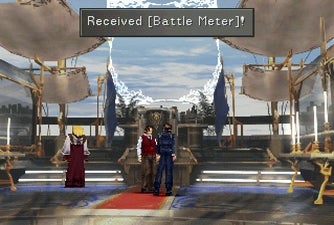 Great job recreating it from a different angle.
KilerDiLeo

Great job recreating it from a different angle.

Indeed it looks great. You must be God to do this by yourself. Or you have a designer with you?

What's funny is that I played this scene (The first time you see Cid in the office)
yesterday.

And I want to say something that has been bothering me a little: How can the message not be on the bottom or center or top? IDK how to do that... I guess that's a script. BTW did you find a char for XATM092? I noticed you have the battler and not the char. I haven't played this in a while, you know? Great job making a remake. I wanted myself but I decided to make a new game. The characters look good too.
Puddor

Close
06/10/2015 12:40 PM
I'm the sole artist on the project. Well, NewBlack has done some design work/concepts/a few map pieces, but I do everything else besides the programming.

And yeah, the message windows are done via script. It's a function in one of Modern_Algebra's message scripts (you can find him on RMRK) that allows you to position windows over designated events.

X-ATM092's battler was made by me, so there's no character set for it. Mainly because that won't be X-ATM092 in the final version (it's another robot that's more scorpion-like than spider). I don't have a reason to make an X-ATM092 character because it's not actually in the game in its FF8 form.
Kaliesto