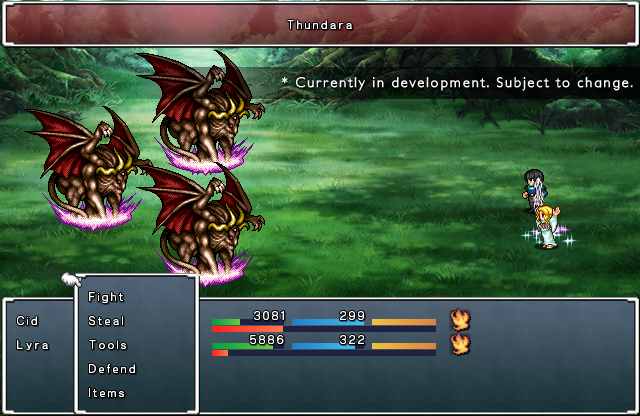 Lyra absorbs an enemy spell with her new Runic command.

Close
11/10/2014 10:29 PM
Yes, it functions the same as it does in FF6, restoring Lyra's MP in an amount equal to the MP cost of the spell she's absorbing. Her old command, Treatment, has been given to Ashe as her command ability.
Noel_Kreiss

Close
11/10/2014 11:53 PM
It's really coming along. #DecemberGoal was always just that, a goal. If we don't make an actual release in December, then I guess #JanuaryGoal is gonna be our new thing to look forward to. I've definitely done a TON of work these past two months on improving the game and killing bugs. Of course, I can't wait for everyone else to be able to experience it, too.
janussenpre
愛・おぼえていますか
1274

Close
11/11/2014 02:30 AM
Things are a bit backed up on my end (I'm still sick) but I'm hoping Thanksgiving week will give me the requisite free time to try and get back on track. We're still quietly looking for people who can sprite. There's a few artistic elements that may or may not make it into the next demo. It'd be a great if they could, but not terrible if I have to put them off until later. (There's 1 particular thing I want to try that's extremely ambitious but in no way on the top of my priority list) If we're at a particular place where the demo could be markedly improved by #DecemberGoal then I'd rather opt for #JanuaryGoal solely for the three whole weeks of no work/holiday vacation time that I can spend fine tuning and finishing up some of the lower priority graphic assets. But we'll see.

Regardless, like William, I'm excited at the thought of people experiencing the new demo. It's like a whole new game.
Adon237

Close
11/11/2014 03:10 AM
I am so pumped to play this game, I really hope your #DecemberGoal is reached! This game is like half the reason I still come to this website.
orochii

author=ZOUK
Is the element of wind present in the game?

Yes it is. The FF Aero spells are present.
WCouillard

Close
11/21/2014 06:09 AM
Aero, Aerora, Aeroga, and Sylph's Whispering Wind are some of the wind-elemental attacks usable by party members. There are a few more sprinkled around.
Noel_Kreiss

Close
11/21/2014 11:36 PM
Can she potentially lose MP if she is hit with an element she would normally absorb?
WCouillard

author=WCouillard
Aero, Aerora, Aeroga, and Sylph's Whispering Wind are some of the wind-elemental attacks usable by party members. There are a few more sprinkled around.


Yes! I'm thrilled that both water and wind are present. It's just that Whispering Wind is a bit on the weak side, Pandemona would be of greater use...
WCouillard

Most of the elemental summons have a power level somewhere between a tier 2 and tier 3 elemental spell (so Ifrit would be a bit stronger than Fira, but not quite as powerful as Firaga). The exceptions are most likely going to be Alexander and Diabolos, who would be stronger due to the limited options for Holy and Dark elemental magic attacks.
macblo

Close
11/24/2014 06:09 PM
I was always annoyed by the strength of summons in most FF games. Once you get the most powerful elemental spells, the elemental summons aren't needed any more. I would think that Ifrit would be useful for the entire game, but I suppose a formula that would be useful for the entire game would be pretty hard to come up with. I guess it bothered me since summons were one of my favorite things about the games.
WCouillard

Close
11/24/2014 06:37 PM
Here's how I got around that: the elemental summons apply their respective elemental weakening status conditions (Ignited, Frostbte, etc. with 100% accuracy (meaning they do increased damage against enemies vulnerable to those status conditions by default).

MP costs are also something to consider. While Firaga costs 50 MP, summoning Ifrit costs only 24 MP, and deals only slightly less damage.

These are the values given to spells to calculate their damage potential (factoring in other stats like Mag.Power).

In fact, repeatedly casting Fire would output higher damage than one casting of Firaga, when the same MP costs are met. You could cast Fire twelve times (total 240 spell power) for the amount of MP it costs to cast Firaga once. It all comes down to "do I need to deal big damage in one shot, or higher damage over the long run?"

Factor in the potential to increase the damage output of any spell (Focus, Faith status, applying Mental Break status, Relics) and the weaker spells can match the higher tier spells easily. Regardless, using an elemental summon to apply an elemental weakness is never a dumb choice, even if the damage isn't higher.
macblo

Close
11/24/2014 06:54 PM
Will there be any focus items or relics that focus on increasing summoning damage.
WCouillard

author=rhb84
Will there be any focus items or relics that focus on increasing summoning damage.

Focus items do not give effects like other gear (unless you're at level 99; in which case, no). Ellie has a Paradigm that increases damage dealt with Ultros' Splashdown attack.

The Focus status condition applies its effect to ALL magical attacks (all Aeons included) and Wedge has a Paradigm (Magick Projection) that allows him to apply Focus on allies, rather than just himself.
rhb84