~Prenote~ (Feel free to skip this)

Lost Identity is a relatively short game that I would have refrained from reviewing just from the multitude of reviews it's already seemed to garner. And it garnered for good reason! This game needs quite a bit of polish before it'll be better off as a game. It's main problem is being a game about education yet has elements of a classic RPG and, more importantly, has quite a bit of a problem with things such as grammar, spelling, and just saying what he wants to say in English. I'll do my best to assist with what I can after...3 reviews. Uh, just keep in mind I had intended to review this earlier. Anyway, warning there are spoilers in the review!

~Gameplay~
Battles: Battles were grossly easy until the final boss. They were also very bland, I would suggest making a few different enemies as there are bees everywhere mostly. Well, at least until you get to the training area and go "Look at all the monsters!", then you realize there are a bunch of touch encounters there that are all either zombies or ghouls. The final boss is also much too hard considering I believe fighting's not the main aspect of the game and you're not going to do much of it if you just blow through the game. So, if you lose against the final boss you go to the training area to grind. Which isn't fun because the skills are fairly bland and the battles can drag on for a while. Basicallly, tone down your final boss or take out battling all together as I would suggest. Grinding was boring and made harder by the fact that there were no inns. It doesn't have to be an inn specifically but at least give me a way to heal after battle that isn't going to take away ALL the money I just earned and also heals both HP and MP.
2\5
Exploration: You frequenyly will find yourself lost in the beginning, but after that everything is straight-forward and there isn't anything worth exploring. Well, except for this one well, which I believe has an antidote in it. The rest of the game is fairly straight-forward exploration wise, as in there isn't any.
3\5
Education Mechanic: This game is based mainly on education. The main mechanic of the game that makes it relatively unique is you must learn to progress. Unfortunately though, the entire game is riddled with grammar and spelling mistakes that can screw you over on a few questions. Also, it can be kind of hard to remember certain things, so I would suggest you add a way to eliminate some answers like a gameshow would do sort of. Or, perhaps a way to get a hint. This is just a suggestion though. Clean up the grammar and spelling and then take out the extremely unnecessary parts. Of course I understand that some parts are thrown in to throw you off or just because they're part of the subject, but I'm sure some can be cut out.
3\5

~Graphics/Mapping~
The maps are very open and empty. I'd say you should scale down the maps and add more details to them. Also, RTP. There are various facesets mostly RTP or ripped. There's also a faceset which is Hatsune Miku. I would suggest you get rid of that, though I suppose it's...okay if you leave it in. It's a matter of personal choice really. It's just most people prefer to not play games starring unoriginal characters, especially fairly well known ones. Anyways, you should decide if you're going with rips, RTP, or custom resources as currently the faceset graphics clash quite a bit.
2.5\5 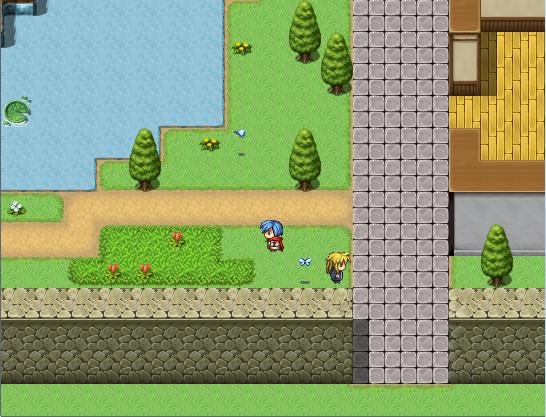 Ah, look at the beautiful butterflies! Too bad they'll probably be wiped out by the killer bees that are infesting the area.

~Music\Sounds~
Acceptable. Mainly RTP with the possibility of 1 song that is foreign. Though, I may have just never heard it before and it's included in the RTP. I'm not going to take away score for RTP just because it's there and it doesn't necessarily sound bad.
3\5

~Plot\Story~
Show
The story is fairly simple. You play Cleve who is tired of not be accepted by his father. So, unlike most kids, he decides the best way to do this is to get an education. He accidentally gets sucked into a hole, is declared hero of the land, and then sent out to get an education as a test or something. Then after all that, it turns out you actually get to go home if you beat a boss. For some reason? Anyway, my main problem with this story is there is no resolution. You never get to see Cleve's dad going googoo, or what Cleve's party member (whom I forgot to mention because she's insignificant) was even talking about. Also, why are the townspeople not freaking about all the enemies in this town? Also, how does fighting tie in with education? If you can fix these glaring problems in your story, you'll have a fair plot on your hands.

~Prelude~
In its current form, I don't particularly like this. However, I feel it could have some potential if you work at it!
2\5