Dragon Warrior: Legacy of Aiden is a Dragon Warrior fangame made by sjmorgan and released during our NaGaDeMo Game Drive.

The game starts with the Archfiend Dhythos shattering the Sphere of Rubiss which causes monsters to wreak havoc on the land. You play as the hero who is summoned to gather the legendary equipment and stop the Archfiend Dhythos. Pretty typical old school RPG story (nothing wrong with that in my opinion!).

From what I can tell the tilesets and charasets are a mix of DW 1-4 NES graphics with the exception of the main characters. They are custom sprites made in that same mold. The main character sprite is actually pretty scary looking. At first, I thought perhaps I was a monster. The monster sprites seem to be from a SNES version of Dragon Warrior/Quest. They are a higher resolution than the other graphics. I suppose sjmorgan might have done this to have a greater choice of monster sprites. 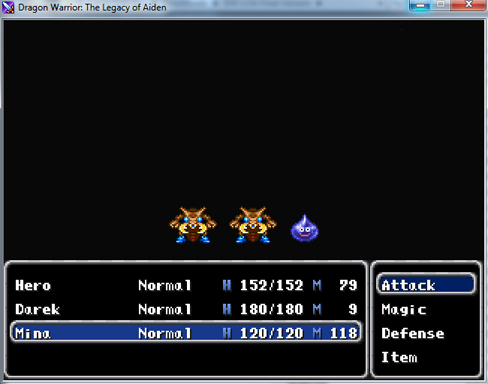 Something doesn't quite fit!

This was one of my pet peeves while playing the game. It's not that the mapping itself was bad, it's just that it seemed like there was too much empty space. Traveling from town to town was tedious because everything is so far apart, and the quests have you going clear across the world map from town to town. Some of the towns / castles (and the buildings inside of them) had a lot of empty space. There was an option in the beginning to choose a "DW style" walk speed and a quicker walk speed. I chose the "DW style" and perhaps this influenced my opinion on the use of space on the maps, but I still have a feeling that everything was just too far apart. I didn't really notice too many graphical glitches. The walls in one of the towers (the tower near Delsad maybe?) were a little off. It also seemed that some of the NPCS had passability issues, but besides being able to walk on some tables / chairs, I didn't have issues as a character. 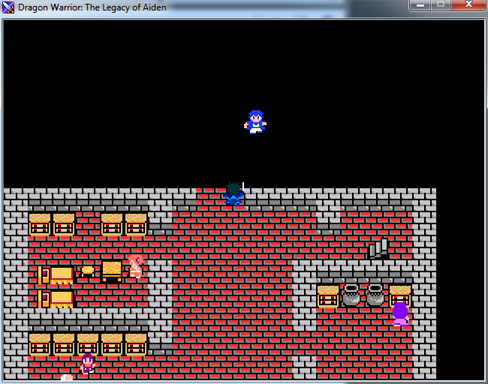 Excuse me sir, but I don't think you belong out there!

I'm not gonna lie. This game started out difficult. The monsters on the first continent weren't too difficult, but once you got over the first bridge, it got a bit harder. Now, I didn't really die that often, but I also didn't wander too far from the town before I spent some time leveling up. The "monsters are harder across the bridge" theme was present throughout the game.

One thing that made it difficult was the lack of GP supplied by monsters. You start with 30GP (the King says he can't afford to give you money / equip you with good gear). The monsters in the first few areas are pretty stingy in terms of GP dropped. I'll list a few:

Now we compare that with the cost of the weapons / armor in the first castle:

As you might be able to tell, it took a while to save up for good equipment. One thing you definitely want to do is visit the shrine north of Latov to receive 80GP from one of the nuns. There is also a chest with GP in it in the first cave. Both of these really helped. GP was easier to come by later in the game as there were chests that were very generous as well as Gold Slimes which give you 1000GP.

One thing I did love about the difficulty was that battles later on (even with regular monsters) weren't just button mashing. Mina (the wizard) comes in very handy with her buff spells like Increase and Sap (Bang also comes in handy). You will find yourself making use of these during regular battles as well as boss fights. She has a good amount of MP, so that also really helps.

Maybe I should talk about the music? It was DW/DQ music. Nothing to write home or complain about really! It worked.

Another thing I really liked about the game was the NPC dialogue. It was usually funny/witty/relevant/helpful. One of the guards in Gardain mentioned how useful a Boomerang would be. A little kid told me that he fell asleep to lullabies easily just like dragons and snakes (use sleep on dragons and snakes, it works!). Other NPCs gave subtle hints on where to go / what to do after the game became a little less linear. I did notice some mistakes in the dialogue. When you go to get the boat from the old man in Delsad he mentions that his daughter ran away to Gardain, however if you talk to the NPC sitting in the eatery right before that he tells you that she went to Kenark. I think the Fortune Teller also tells you she is in Kenark. She's not in Kenark.

There were also a few spelling mistakes. "Received" is spelled incorrectly in the end of battle dialogue. Is it "Minnack" or "Minaack". I'm not sure the developer can decide. It's even spelled both ways on the gamepage.

The game does allow you to save anywhere (except Shrines of Aiden?) and also includes the traditional "save at a king" option. I think the save anywhere feature really helped me not get super frustrated and give up early on.

There is also the encounter rate. Sometimes it felt like there was a random encounter every step. Maybe this is just RM2k or maybe it was intentional at some points. I guess overall, it wasn't too bad. Just sometimes it seemed to really ramp up.

The non-linear portion of the game. I did get a tip from the old man who gave me the boat to sail east. That helped. The priest in the shrine near Mendel told me that I would need to move lava to complete my next task, but didn't tell me how. I don't know if anyone else was supposed to tell me about the Lava Staff or where it might be, but I would have been totally lost if I didn't peek at the walkthrough that the author posted on his gamepage. I came back to the walkthrough several times.

The Arena. The arena battles should not be game over deaths, but that is just my opinion. I guess this part is optional anyway.

The Lava Cave. A bit difficult to tell the lava apart from the regular ground. I was confused for a while on why I was taking damage while walking. I guess some of the NPCs did warn me about lava in the Lava Cave.

Black Smith near Teroval needs a better education. I guess that's why they kicked him out of Teroval. He doesn't know the difference between an "Oar" and "Ore". He also told me to go North East when he actually meant North West.

Tower of Minnack (Minaack?) was a bit easier than I expected it would be. The random encounters were difficult but I used repel/fairy water to keep them to a minimum. The tower consists of 4 levels with a mini-boss guarding the stairs to the next level. They were pretty straight forward. The 3rd level had a bunch of crazy moving statues flying all over the place. The 4th was the most difficult as it was a lever "puzzle".

The developer recommends defeating the 4 mini-bosses and them coming back to fight Dhythos. I decided to just use some one of the items I had to restore my party to full HP + MP and give it a try. I actually defeated Dhythos on my first try (it came close with each of my party members dying at least once). There wasn't really an ending. Just some text telling me I had won and that the gate to the demon world was open and I could travel there if I wanted to. I didn't do the optional end of game content. I guess if you walk around, people thank you for defeating Dhythos and saving the world.

Close
07/25/2012 05:07 PM
Thank you for taking the time to play and review my game. :) No one has ever pointed out the issue with Minaack being spelled wrong at times. Laughed at the education remark for the smith. He should know the difference between a chunk of metal and a device to paddle. I appreciate the criticism, and bug finds. Glad that you were able to enjoy the game in spite of them. :)
Pages: 1