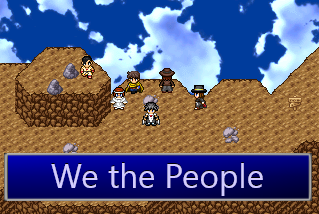 OVERVIEW
We the People is a project that has been in various stages of development since 2008. Started by my friend as a funny thing to share within our friend group, the game soon expanded beyond its original "inside joke" nature to include... well, a lot more inside jokes. Oh, and bad puns. I hope you like bad puns.

STORY
Bobby is a practicing student at a school for gifted mages with his lifelong friend Johnny. But after an attack on the school by an unseen force, Bobby is thrust into a snowballing story as he gathers friends and encounters The Black Habit: a deadly cult with unknown but presumably nefarious intentions. Can Bobby and his friends stop The Black Habit from completing their evil scheme and make it home?

UPDATE - 11/4/18
This game has been on-and-off for years, and is pretty much dead in this incarnation. However, I'm currently outlining for a new script to restart the game from scratch, probably in RPG Maker MV. You can read more about it on the most recent blog.

Also, my high school friend group called ourselves The People. That's why the game is called We the People.

Yeah, it was better left unexplained.

The future of "We the People"

So, it's been at least four years since I made any fruitful development on this little game, and my artist hasn't worked on it in even longer. I think it's pretty safe to call it dead. The burial will be in a couple days - I'll let you know where to send the flowers.

That's not to say you've seen the last of it, however. I've gotten the bug to work on this again, but I think my ideas have outgrown my current setup.

You see, I didn't start this game. My friend, the one that did the art, did. And after taking over from him, I sort of wrote myself into a corner, not wanting to change the early parts of the game that he had already made. This hand-off and expansion of scope led to some tonal and creative unevenness that was already becoming apparent, even in the first demo.

Long story slightly less long, the game needs to be completely reworked, from the ground up, with a better script, in a better engine than RPG Maker 2003. It'll need all original assets, which, sans music, are things that I cannot do and really have no desire to learn how to do.

So yeah, for now, it's dead. But in my spare time, in between bouts of editing my novel, I've been brainstorming an updated outline with new and expanded story elements. Once that's done, I'll move to a scripting stage. I'm going to try to actually plan this story out instead of brute forcing my way through it. If writing and editing a novel has taught me anything, it's that making something is easy; making it good is hard. I also learned that I need some semblance of direction. I'm not a pantser, yet I'm not quite a plotter either. I'm some weird hybrid that needs enough guidance to know where the story's heading, but not so much that I can't develop it some as I go. This balance was completely lost on me during the first iteration of this game, nearly a decade ago at this point.

My eventual plan, once the script is completed, is to hire some people to work on the various aspects of the art that I can't (sprite sheets, enemy sprites, tilesets, animations, etc), using the current art and future script as sort of a tonal baseline. The program I end up using kind of depends on when this scripting gets done and when I have the financial ability to fund such an endeavor. It could be RPG Maker MV, or it could be a future RPG Maker - it all depends on timing. Regardless, I will need to learn an entirely new program and the crazy world of plugins (nifty!). This is definitely a back burner idea, but it's one that I can't quite shake lately.

What started as a stupid little game full of inside jokes that no one would get and based on real people from my friend group has evolved in my head to a much grander loveletter to the 16-bit jRPG era, with my own little existential twists and personal therapy sessions. I think it's a story worth telling, just not in this current form.

This is going to remain the game's official page for now, and I'll probably post script updates here and there. First order of business is changing that godawful name. Something less governmental. I was thinking O Canada, or maybe My Country, Tis of Thee.

At any rate, I'm going to leave We the People V0.11 up indefinitely (or maybe I'll cap it off with a cleaned up V0.12 - there are still a couple of typos and bugs that could stand to be fixed if it's really the last installment). It's still a silly and occasionally charming little piece of my creative past. But the perfectionist in me feels the need to start over on the right foot, with more experience and some less restrictive software.

For anyone who kept up with this stupid little game, thanks. And thanks to the two people that did Let's Plays of it, too:
Fidchell and Tyranos (who seems to have removed all of his social media content, so his LP is sadly lost to time, probably). I appreciate all the feedback that anyone's ever given me for the game, and I hope to bring you news sometime soon.

Thanks, everybody!
A laser trap puzzle near the beginning of the game.

A typical early battle in the forest.

The first area in the game: underneath the school!

Mushroom Forest is a forest of mushrooms Close
01/28/2013 11:10 PM
Game is still moving along, albeit very slowly. With myself and my graphically talented friend both in college, it's difficult to find the time to work on it. Plus we're lazy.
Oh_Carnby

Close
05/17/2014 08:06 PM
Ha Im not about to spend 20 minutes right off the bat trying to get past those moving objects, especially since when you use shift to speed, you only go a few steps then it goes back to normal.
Oh_Carnby

The Ring system is still unfinished though, so be wary of that.
Pages: 1