0 reviews
Save to Dropbox
Wondering what's happened to the game? It evolved into a spiritual successor!

One Night 4 is the latest addition to Dark Gaia's infamous horror game series, under development in the RPG Maker VX Ace engine. It has the distinction of being the very first horror/adventure game created with the engine. One Night 4 is not a continuation of the previous One Night games; its story is completely unrelated (except for a few small references) and it is aimed at new players and veterans alike.

In One Night 4, you play as Gordon West, an ex secondary school teacher turned failing writer. When a strange package arrives on Gordon's doorstep containing an empty golden locket and a slip of paper reading "Come to me", he begins experiencing recurring nightmares that seem just a little too real. As you survive each of Gordon's dreams and uncover the significance of each surreal place you visit, you'll learn a terrible, forgotten secret and the origin of this mysterious fate that has befallen Gordon.

With all new exploration focused gameplay (with minimal combat, in the tradition of One Night 2: The Beyond) and six dark locations, including a real world and a dream world that begin to intertwine, this will be One Night you won't forget.

One Night: A New Beginning

Wow. It sure has been a long while since I've given an update on One Night 4, hasn't it? According to the information on the title screen, the last demo was released in April 2013 -- over one whole year ago. In the meantime I made the move into commercial game development and even released Legionwood 2. I've received emails from worried Indiegogo contributors, wondering if One Night 4 hasn't just died off and been forgotten.

Let's remedy that. Take a look at this nifty teaser: 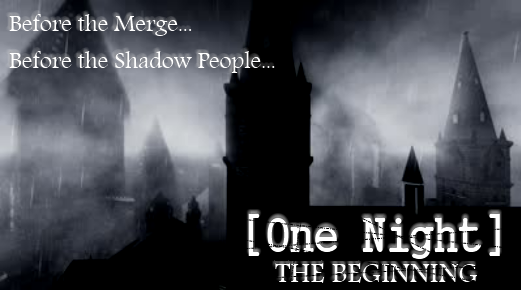 Yes, One Night 4 has changed into something quite different. One Night: The Beginning is a brand new chapter in the One Night series that serves as a prequel to the entire series and explores the origins of the deep backstory introduced in One Night 2: The Beyond. Unlike the previous games in the series, The Beginning is a fully fledged horror themed RPG (ie. not a "survival horror" game, but it will still have horror elements) that allows you to create your own character and build up their stats and abilities as you investigate the origins of a Lovecraftian nightmare at the dawn of the 20th Century -- complete with dialogue trees, experience points and dice rolls.

While I'd rather not say anything about the storyline or gameplay concepts at this point, as New Beginning still has a long way to go until completion (I still intend to finish writing Blood Lake first for one), I'm sure some of you are wondering why I've made the decision to make such a drastic change to One Night 4. There are a couple of main reasons.

First of all, I was, to be honest, unhappy with how One Night 4 was turning out. The gameplay, which involves basically solving puzzles while running from an Ao Oni style stalker enemy, doesn't really add anything new to the series. Back when the original three One Night games were released, survival horror was a rarity amongst RPG Maker games, and indie development in general. These days, there are plenty of horror games similar to One Night, and first and foremost, I want to do the series justice and make the latest game stand out from the crowd. With The Beginning's new focus on RPG elements, I can "reboot" the mechanics of the series and reinvigorate an old, tired formula.

Secondly, as some of you may be aware, I've recently made the move into commercial game development. I completed and released my first commercial game, Legionwood 2, and thanks to commercial distribution channels such as Steam, I've discovered a new audience that were previously out of my reach. I would love to bring One Night to this new audience, too. That said, the main thing I've learned from Legionwood 2 is that it's hard to market a sequel. I'd hate to think how hard it would be to convince people to buy a game that's the fourth in a relatively unknown series (which potentially requires the knowledge of three games worth of backstory to play properly), but with a standalone prequel I can reach out to people who've never even heard of One Night, One Night 2 or Full Circle.

So yeah, part of it comes down to selling out. But the good news is that One Night 4 isn't dead. It's turned into something altogether more awesome, and it's going to take the series to new heights. Survival horror has almost become a cliche these days in the indie community -- One Night: The Beginning needs to be something fresh.

Close
06/02/2012 04:07 AM
@saix99: There's no battle system at all in this one, actually. There's only one enemy in the game, and he appears in scripted chase scenes only. It's reminiscent of Silent Hill Shattered Memories.

@Sana: This will take a lot less time to develop than Legionwood 2, so as soon as I'm done wrapping up my novel (a week or two from now) it will be full speed ahead on this game.

@chana: Thank you. I decided not to continue the story of the previous games.
saix99
194

Close
04/02/2013 08:57 PM
I have two problems:
When I open the game, it says that there is a tileset missing. Something like Indoor_A2 or something like that. I'm assuming that this is why I don't see any desks below things. A lot of the maps are black. Also, there are lots of holes that are not in the ground, yet I can't move around them.

Secondly, I don't know what to do after going into the padlocked room in the school. Please help :P
Dark Gaia

Close
04/03/2013 01:18 AM
I see... I forgot an RTP tileset, which it doesn't need in the in-game maps, but is somehow provoking an error. I'll check that out. That's indeed why there are no maps or floors. It's strange though because the maps don't use RTP tiles, but this is an RTP tileset. I'll re-upload with one in it.

That must be where the impassible holes are coming from -- I didn't encounter them during testing.

By the way, if you have One Night Full Circle, you can take "A2" from the System folder, rename it and paste it into ON4's tileset folder.
Dark Gaia

Hi everyone. There was a small problem with the demo I released yesterday. I didn't realise that the tileset I'm using in the game uses one of the RTP's tilesets and I didn't include this in the download. Basically, the game still runs, but all indoor tiles are missing, which means no walls, floors or tables.

I've re-uploaded the download with the missing tileset. Please download if you are experiencing problems. My apologies -- I was going nuts trying to figure out why people were reporting impassibility errors that I didn't encounter during testing.
obsorber
50

Close
04/04/2013 10:53 AM
Played it so far and I'm very impressed. There are a few passability glitches though. I like the concept of switching from home to dream. Its a nice new feature, the mysterious plot of the woman sending a letter to him has got me gripped already.
Redd

Close
04/05/2013 12:52 AM
There's also some priority glitches with the chairs. You appear on top of the chair and it cuts it off. Doesn't look pretty.
Full screen in windows xp causes the game to crash. I don't know if you were aware of that or not, or if it is even fixable.

Also, about 2 hours later, I'm still stuck after the padlocked room. I've tried using everything on everything, both in the dream world and the real world. I thought I had to flush the toilet in the real world to get the thing in the toilet in the dream world, but it doesn't seem to work. The note says "I flushed something down the toilet, but it got sent into another world."
Please help, send me a message or something, I'm desperately trying to figure this out with no avail :|

However, it looks a lot nicer with the A2 tileset :D

EDIT: The horror novel in the library also needs to not be set to a move animation event.. make it direction fix or whatever. Clicking on it makes it disappear or turn into a head looking thing.
Dark Gaia

Close
04/05/2013 03:23 AM
Just to let you know, I'm aware of the passability issue with the chairs. I'm trying to get a script made that prevents the chair appearing above character sprites when they stand in front of it, and only when they stand behind it -- but I didn't have time to put that in the demo.

@Obsorber: I'm glad you like the story so far. If you haven't played Silent Hill 4: The Room, you should really check it out. It's the main inspiration for this game.

@Redd: I'm not sure what's causing it to crash in full screen mode on XP. I really can't test that, as I'm on Windows 7, and don't know anyone with an XP computer. Does it only happen with One Night 4, or do other Ace games have the same issue? Also, I'll fix up the horror novel event (thanks for reporting).

As per what to do after getting through Reception, here's a little guide:

Head into the library. You can use the Wrench to open a box on one of the shelves. It's filled with rocks -- use the Empty Bag to collect the rocks, then use the now Weighted Bag to weigh down the pressure plate in the other bathroom.

You'll get an Empty Jar. Find some way to fill it with water. Have you ever heard what happens if you pour a bucket of water into a toilet? ;)

Close
04/05/2013 08:55 PM
No it doesn't happen on other VX Ace games. I've only tried a few others.. I don't know what could be wrong :P It just simply stops working. I could try gathering an error report, if that would help at all. I AM using my old save file, but it runs fine in windowed mode.

And thanks, I will try that x)
Dark Gaia

Close
04/06/2013 05:47 AM
I doubt an error report would help much. Without access to a computer with Windows XP, there isn't much I'd be able to do with it. Thanks for letting me know, though.
Pages: first 12 next last