Bothering Snape was made as an entry for the RMN 5th Birthday contest, the fact it didn't make it in under the deadline may have disqualified it from the contest, but it stuck to the contest restrictions none-the-less. The challenge was to complete a Badadaptation of either a TV show, movie, song or comic. In fact the only thing you couldn't make a badadaptation of was another video game, one supposed that would have thrown open the flood gates. The contestants had 5 hours to complete the game, so you can understand that this was never going to be a highly detailed masterpiece.

As the title suggests Irili chose the Harry Potter Universe to place this game, not sure if the adaptation was based on the films or the books, but it makes little material difference in the end. The game is set almost entirely in Professor Snape's potions class, and the whole point of the game is to bother Snape. Now as I have not lived under a rock in lower Mongolia for the past 15 years I have read and seen the various renditions of Harry, Ron and Snape and I would say simply by existing Harry has managed to achieve the stated aim of this game, but of course that wouldn't be any fun at all.

As is to be expected all the graphics are RTP, well actually almost all, Irili has added a few custom face/busts to the game for the main protagonists Snape and Harry, they are rudimentary but it's not difficult to see the resemblance to Alan Rickman and Daniel Radcliffe, as well as for Hermione & Ron though those are a little less accurate. With the exception of the borrowed title theme and image the rest of the components of the game are the default, but that is hardly surprising given the brevity of the creation period.

The game play is basic, annoy Snape, which in truth is probably not the smartest move a student at Hogwarts can make, after all the guy that invented the Sectumsempra curse isn't someone you want to trifle with. There is one battle in the entire game, with, of course, Snape, and whilst it is the default battle scenario, without much in the way of battle strategy the opening gambit is somewhat less sophisticated than would normally be expected. 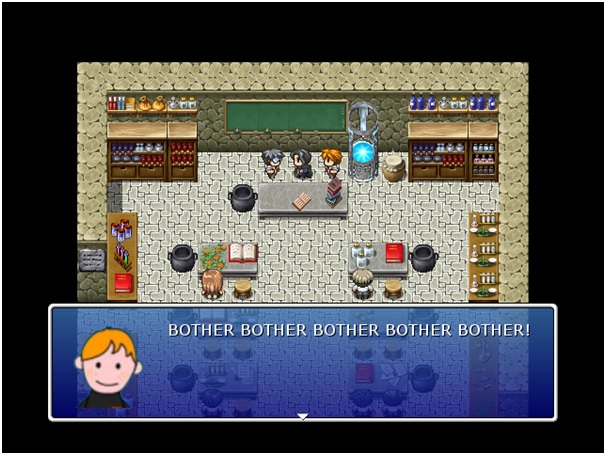 Hey they're first years, no one said first years were smart.. except Hermione.

There are two possible outcomes, if you've spent the time before you go for the bother spell, one assumes a pestermori variant, annoying Snape with stupid inane questions and getting the potions wrong in just about every way imaginable then the 'battle of wits' will kick into the battle screen and initiate a fight, though there is a game breaking bug in the fight scenario with an unending dialogue loop once Snape hits 50% of his HP, so unless you have a copy of the engine and can go in and fix the loop you'll have to give up at this point. If you do, or know someone that does, then it's pretty much just a wallop on him with a few basic and unfortunately misspelt spells until you win, or you die. However if you haven't spent enough time bothering him before initiating the fight Snape bypasses all those fiddly regulations and lesser hexes and curses and goes straight for one of the big three, Avada Kedavra with the expected effect, game over.

It's not rocket science by any means but there is a bit of fun to be had poking Snape and essentially acting like a 12 year old, well with the exception of Hermione, she was born 25. In fact the characterisation of Hermione is pretty spot on, she's the one who calls Ron and Harry idiots for annoying Snape and has all the answers. Been experimenting with the range of your time turner again, Hermione?

In the end the game takes about 10 minutes to play after you've exhausted all the various ways to annoy Snape, and have in fact repeated a few of them just for the heck of it. There really isn't anything else to this game and with the game as it currently stands with the game breaker it is a little bit of a disappointment. Still even if you can't fix it, you're not really missing out on much. It was made as a badaptation and fits the bill well, but it is obvious Irili had a bit of fun making it so that's not a bad thing.