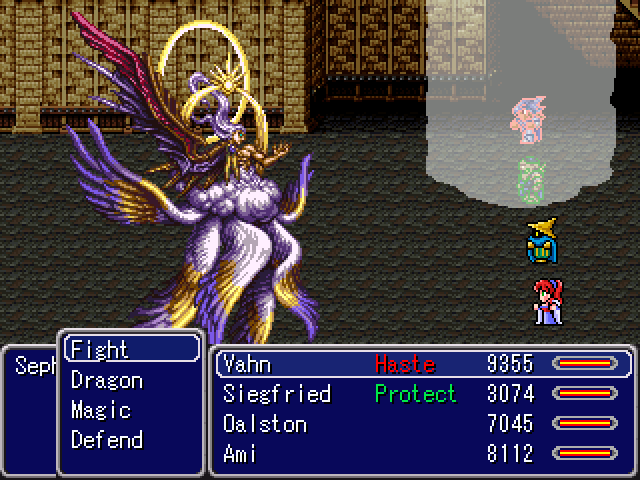 It's from the crappiest Final Fantasy game ever, All the Bravest.
Ephiam

Close
11/14/2013 10:58 PM
But it's a FANTASTIC source for awesome sprites of FFVII-XIII enemies/bosses. You should totally include an Orphan battle, too. =P
Arandomgamemaker
1629

i hate all the bravest

Close
11/14/2013 11:43 PM
I may as well explain the context of this fight. Sephiroth (as well as two other big villains, Exdeath and Kefka) have a chance of showing up at random in the gauntlet and at any level, which is frightening because the three of the villains are ludicrously strong. Beating them doesn't end the gauntlet and you can keep going, perhaps even fighting them again (since the gauntlet is an infinite number of battles, you stop when you die or just feel like walking away). They're basically just speechless super bosses.

I may change it so that they don't show up after you defeat them once, instead loading a different random monster formation in place of them.
Noel_Kreiss

Close
11/14/2013 11:45 PM
I may be alone in that, but I really wanna see a Final Fantasy XIII-themed bonus dungeon. There are so many official FFXIII sprites from SE, you can't even think it's all true.
UPRC

Close
11/14/2013 11:50 PM
I forget everything about FF13 except the awesome plains from the free roaming bit. Also the TERRIBLE final dungeon that made me quit playing the game. Never before have I quit a game on the final dungeon out of sheer boredom, but FF13 did it and I think Square-Enix deserves a standing ovation for making me not want to finish a Final Fantasy game so close to the end.
WCouillard

Close
11/15/2013 01:38 AM
All the Bravest is terrible, but it's a good source for sprites for weapons/monsters for sure. I was hoping to use some of the monsters for FFD, but they were too small when resized to their actual sizes...

I second the need for either an Orphan or XIII Behemoth battle because the sprites are pretty damn nice.
UPRC

Close
11/15/2013 02:01 AM
What does Orphan do? I never reached it on account of the final dungeon being horribly boring and tedious.
Ephiam

Close
11/15/2013 02:03 AM
Heals its self with a white orb it summons; inflicts status ailments and instant-death with a black orb it summons. It also has a basic attack AOE and an ability it uses periodically that reduces your entire party's HP by 1/3? Or something similar. Pretty basic stuff. Haha. I'd recommend looking up a video showcasing the final boss if you're curious.
kalledemos

author=UPRC
I forget everything about FF13 except the awesome plains from the free roaming bit. Also the TERRIBLE final dungeon that made me quit playing the game. Never before have I quit a game on the final dungeon out of sheer boredom, but FF13 did it and I think Square-Enix deserves a standing ovation for making me not want to finish a Final Fantasy game so close to the end.


If it left a bad taste in your mouth, I'd recommend the sequel: it's eons better. And to get back on topic;
I love endless arena battles like. whenever I play a game with one no matter how good or bad, I always end up putting all my time into them.
GamingMitchell03232013
0

Close
11/27/2013 06:49 PM
I really don't understand all the hate for ATB. Honestly, my only two gripes with it were that you couldn't use Gil for anything (You should have to use Gil to buy the Premium Characters, Tickets, and the Hourglasses IMO), and the gameplay is mindlessly redundant (though that can be good sometimes).

But back on topic, will you be using Safer Sephiroth's Battle music from FFVII, or just the generic superboss theme in this game (I think it's The Fierce Battle from FFVI)?
rhb84

Close
02/18/2014 09:14 PM
Finally beat that bastard today. One of the hardest boss fights in the game definitely. Still not worse than Dr. Lugae and his robot though.
UPRC