If this was a bad review this would say: "The Droop"

~Prenote~ (Feel free to skip this)
The Drop is an incredibly fun rogue-like and follow-up to creator Deltree's The Reconstruction. Deltree strikes me as a pretty competent developer and popular on RMN so I was surprised later to have found such a cool game and developer seemingly out of nowhere. I was even more surprised, after the game was finished, that no one felt like reviewing it despite it even being featured! I had some fun with the game as a tester, and I love the finished version even more.

Let's drop this game in a hole. A reviewing hole~! I guess.

~Gameplay~
Soul, Mind and Body Health: There are essentially three health bars in The Drop; Soul, Mind and Body. From what I gather, this was present in Deltree's The Reconstruction as well. At first I was a little confused. Well, a lot. Once you finally learn the hard way, a la death from all three of the bars depleting separately, you realize it's not so hard to grasp. I still feel the game could explain it to you better, but anyone who doesn't give up right away will figure it out. The more important aspect of having three health bars (that is more important than laughing evilly as your players squirm trying to figure them out) is having the player decide which bar they need to bring to nothing. It keeps the battles pretty fresh through out the game, and even when you've finished experimenting with this the game starts changing up enemies.
3.5/5

Environment & Units: The environment in The Drop is pretty reactive, so much so I'd scare myself often by setting grass on fire! This is pretty good in a pinch and you'll want to squeeze every last floor you can get out of your adventure since it costs money to go back to the lowest floor you've reached. Besides that, you can pick grass which I liked. I mean, it wasn't exactly game changing but if I got bored I'd play a sort of, Grass Roulette and eat a random grass when I was low on health. Um, not the smartest thing, but yeah. Just like all my first dates...Overall, I ignored the grass. Water was okay in the beginning too, but after a point it gets a little useless.

Units however is where The Drop shines, at least in ye olde book of things Gourdy likes. And Gourdy likes puppies! Well there are no puppies in this game. HOWEVER, there are many units that'll be attracted to you or against you depending. One of these is a bug sort of creature which is adorbs~<3 My personal favorite in fact, the only down side of this system is the friendly units don't follow you and leave a sprite sized hole in your heart when they don't. It encourages you to play the game with a ton of different races and traits. Play as someone evil and go it alone for the most part, or someone more popular among the units you want to be your friends. I had so much fun scouring The Drop for friends, it was pretty much the main draw of the game for me.
5/5

Some other features I didn't go over were magic, cores aaand I think that's most everything. Magic was the main source of damage for pretty much any character that isn't incapable of magic. Mainly since regular attack only does body damage(Whoops, I should note here I THOUGHT that was how attacks worked. They actually depend on which kind of weapon you have equipped. Example; Orange is Body damage melee attacks.) I liked to organize my spells for each type of damage I could deal and that fulfilled my simple little desires in and of itself. I ignored cores, but not because they're useless! Everyone go out and get a core today~ I think the main ding to gameplay was learning it, but it's fantastic otherwise! Good job~<3 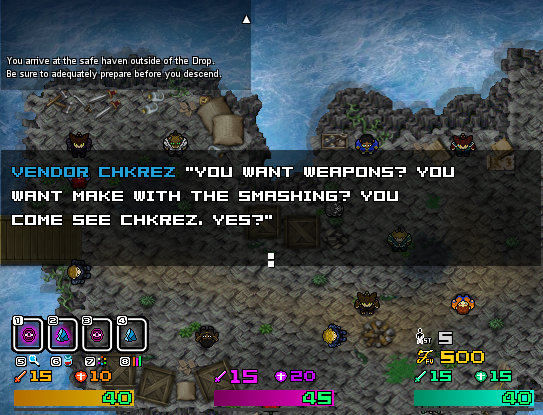 If I had a dollar for every time I've heard this.

~Graphics/Mapping~
Every single thing in this game is custom. Except maybe some sounds and menu items? Either way, this game is looking sweller than a stubbed toe. IE; I love it! I can't say I'm the biggest fan of the character portraits, but they constitute such a small part of an overall beautiful game that I could easily overlook them. What's even more applaud-able about the game is that it manages to keep its sexiness going even with randomly generated dungeons being the entirety of the game.

~Music/Sounds~
Everything fit well, though The Drop's music was a lot more about ambiance than it was about listening to the song. For that reason, I can't say I remember it too well let alone would picking a favorite be possible. And as far as I know it was all custom/not RTP, which is always a plus in Gourdy's book! 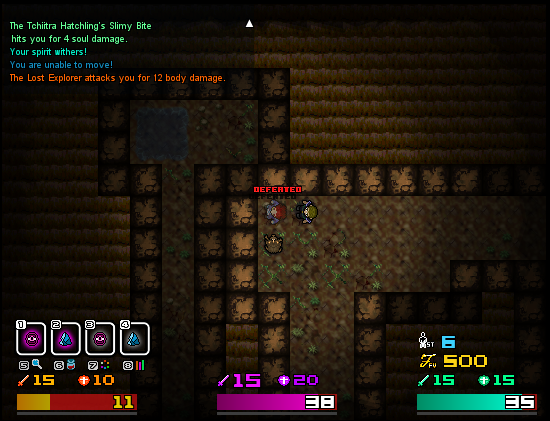 Oh god, this is just like all my first dates.

~Writing\Story~
This part will mainly be about the writing of the game since there isn't really too much of a story in this game. The closest you get is a reason for someone to come to the Drop, and the Drop being created. I can appreciate simplicity in my games from time to time, especially if the game play is good. Which it is. I could do with more speaking tailored to my species in this game. There's definitely some in the game already, so it doesn't seem like it'd be too hard. Also the dialogue at the camp generally stays the same so it didn't really provide me with the in between-dungeon-crawling-segment break that I wanted. At the very least, it's interesting when you first start.

~Prelude~
And that's about it! This review might come off a bit forced, and the humor specifically, but I needed a game to stretch my reviewing abilities with and The Drop was the kind of great game that I've been looking at reviewing for a while. I hope this helps regardless.
4.5/5

Close
01/26/2014 10:34 AM
Thanks for reviewing this game. This is excellent engaging stuff. I thought the game was excellent as well, and was planning to review it too, not for this event but because I thought a game this excellent must deserve a review, but I could not finish the game sadly.
Deltree
doesn't live here anymore
4556

Close
01/26/2014 12:20 PM
Thanks for the review! I appreciate your enthusiasm! (One thing - your melee damage is determined by the weapon you have equipped. Orange ones deal Body damage, etc.)
Gourd_Clae