Sooo I'm really terrible at updating things (total shocker) because I hate double-handling stuff and I already have a semi-updated blog (you can check it out in my bio), but I just wanted to say thank you to those of you that have downloaded and played the demo! It really means a lot to me. I'm also in awe that one of my screenshots is being featured on the main page. I have a wee bit of impostor syndrome so I find praise really hard. Thanks for diggin' what I'm layin' down, I guess?

I've done a lot of overhauling for the different systems in the game and rather than constantly reuploading the demo, I'm going to leave it as it is for now and try get something meatier out in the next year or so.

Updated the demo again to version 1.4. Sorry to keep making everyone download things again, but think of my poor internet connection, uploading things all the time.

This latest version should definitely have the missing sound files, as well as an update for Modern Algebra's Animated Parallax script. This means no more stagnant water, yay!

I've been taking a bit of a break from gam mak (I think I deserve it?) now that the demo is out, but I'm hoping to get back into things in the next couple of weeks. Been slowly working on the next dungeon, which is a floodplain. This means making twice the amount of maps———flooded versions and non-flooded versions. Why do I do this to myself.

Demo-related update for the people

I decided to add another download for the Vermilion demo, this time with RTP included (for those that don't have RPG Maker VX Ace).

Some of you may have noticed that I updated the original demo to include a couple of character sprites that I forgot about. For those that haven't got v1.1, please download it, otherwise you'll strike an error when you try to enter Morrowmere and bring shame upon me and my family.

Really interested to see what everyone thinks of the demo! I definitely haven't been refreshing the page every few minutes to check if there are any comments.

All right ... it's that time. I've finally got a demo ready for y'all. The demo should take about 2–3 hours and consists of the entire Act 1.

Any feedback, I'm all ears.

... but I've updated. And hold onto the seat of your pants, because there's exciting news. I've probably mentioned this many times before, but I suck at updating, especially because I'm all about that silent, head-to-the-grindstone workhorse life.

I've been working hard at trying to get some kind of demo ready for this game, and I think it's finally time. And now everyone will play and be like, "geez, we waited 5+ years for this?"

... but seriously. Gonna put out the call for beta testers, if anyone's keen to rip my demo to shreds. I'm open to all sorts of feedback. Just gotta trim the project folder down and hopefully make the download a manageable size, because all the maps are parallax, so we'll see how I go.

I suck at updating things ...

Okay, so I have a pretty exciting update. I don't know if everyone else will find it exciting, but I've been busting my ass trying to Event a random-encounter-and-alert system, and it's finally WORKING.

Here, have a picture: 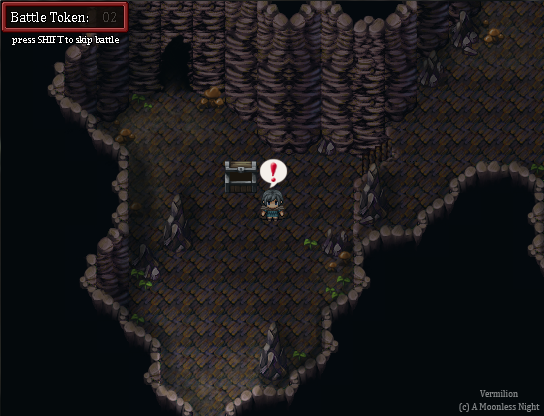 So, to explain the system, a little box (top left) pops up to alert you when a battle is about to start, and you have about three seconds to press the Shift key to skip the battle. Doing so costs 'Battle Tokens' (which I may still rename, although I can't think of anything that makes sense in-universe, if you know what I mean—totally open to suggestions!) I think Battle Tokens will be dropped by some enemies, scattered around the world and purchasable from some shops.

Everything is Evented, which I'm pretty proud of.

Sorry to those of you that prefer on-screen encounters, but I'm not really a fan of them and would find them kinda immersion-breaking for this game and these maps ... I think this is a pretty nice compromise, though. I got the idea from an old RMXP game called Exit Fate, although that one used gold to 'bribe' enemies before the battle started. Same concept, though.

Anywho, hope this was as exciting for everyone as it is for me. I LOVE IT WHEN A PLAN COMES TOGETHER.

I updated my other non-RMN blog (see my profile) but I suppose I should update all the things. I actually suck at updating things. Believe me, I am making progress, but I just suck at telling everyone about it. I've made a couple of changes to the project: updated some features and the Character section. I plan to do an overhaul of the screenshots when I've got some more, especially ones showing gameplay and stuff.

Also, I think I might have an approximate date in mind for the demo. I'm planning to get at least one map done per day in November as a kind of NaNoWriMo thing (NaGaMaMo?) and I'm making good progress on stuff now, so I should hopefully have a demo out by at least Christmas or early in the new year. I'll be on the look-out for beta testers around December before the demo's out, mind you. I'm hesitant to give an exact date right now, since there's still quite a bit to do. For example, I've plotted out the story in Word, so I know how things are going to go down, but I haven't done anything in-game yet, and I also have a bit of pixelling and face-making to do. I've enlisted the help of my cousin for pixel work, so that should lessen the load. Need to get some game music, too ... everything's silent at the moment.

Anywho, I appreciate everyone's continued support, and while the intended release date is some time in December/January, please don't burn me at the stake if that doesn't quite happen. D: I'm on a roll and I'm feeling confident. I want to at least get it out before February, because I've got a big lot of proofreading then that will take up most of my free time.

Guess this will serve as my first blog post!

At the moment I'm churning out some database stuff, sussing out weapons and skills and my battle system. I'm using Yanfly's Weapon Mastery script, where you can gain skills depending on how much you use a weapon. The script describes it better:

"Weapon skills appear when certain weapons are equipped and after having used the said weapon enough times in battle. The weapon skills associated with the weapon are independent of what the user has learned through levelling or other means, but instead are dependent on how proficient the user is. Every single weapon can have different weapon skills even if they are the same weapon type, thus allowing the player a plethora of new options to explore when playing through the game."

I have 7 different weapon types: One-Handed Swords, Two-Handed Swords, Ranged, Polearm, Blunt Melee (which covers staffs and clubs), Knives, and Trauma (which covers hammers and axes). There are four weapons under each type. Each character will be able to use every weapon, but they will be more proficient with certain types and will learn more skills from them. For example, Antheia is highly proficient with a one-handed sword, so she will learn five skills in total over the period of the game (these are separate to the elemental skills the characters will learn from equipping Shards). So, A proficiency = 5 skills, B = 4 skills, C = 3 skills and D = 2 skills. There will be different skills for each weapon and each character ... so a lot of work for me, but hopefully more fun and playability for the player.

The weapon skills will appear under the 'Attack' tab rather than under the 'Skills' tab. I'm getting rid of plain old button-bash attack. All the weapon skills will have special terms of use (can't think of the right phrase); e.g., there may be an attack that strikes all enemies, but the character will need to rest one turn. I'm hoping this will make the battles interesting, but not time-consuming or boring. I appreciate that there are certain situations where you just want to button-bash out of a dungeon, so maybe I'll combat this by having easier battles; let me know what you all think.

I'm also thinking of having just one of each weapon available in the game ... not too sure how this will work when it comes to buying the weapons, but I'm sure I'll figure something out. Suggestions are much appreciated!
Pages: 1