0 reviews
Insanity is a game made for RMN's "All Hallows' Event" which is a horror game.
There are 8 players involved; you, and 7 people that have been captured.
It is about a 'survival game', where you must remain alive wandering through a mansion with others out to kill you, along with unknown entities prowling the darkness and mutations.

You are trapped in a mansion with no means of exit; you can go through the back into a forest, but that's pretty much it. You've been locked in with killers, mutations and ghastly beasts, and you're on your own to survive.
Trust no-one.

Choose your gender, choose your personality:
You get to choose the gender of your character at the start.
If you choose male, your personality is straight-forward and you accept what is happening, keeping an open-minded view whilst keeping curious. Being a female however provides you with a different personality; you become more timid, worrying about the events occurring more. This allows you to view different dialogue depending who you choose.

Hey there!
So, progress on Insanity is going smoothly; everything works so far and there's still around 14-15 days before it needs to be completed. Excellent news.

Though I must admit; the eventing is harsh. I say 'harsh,' but by this it means huge. As I'm having it so that your character changes gender, each event requires a conditional branch from the variable controlling the gender; this means that events are practically doubled in size! As the character acts and talks differently varying on their gender, this means I must run through the whole event to make sure it's accurate, too.
No problem, that's simple to do, right?
... Not necessarily. The events are set up to try and 'scare' the player (which, in my opinion, it isn't yet), and some of the events are a little complex as it is. In any case, no problem, I still have the time to do it. It's just... ugh. Stressful.

Another problem would be the faces. As I'm using faces for sprites from Avadan to help vary it, this makes produces of the problem of lack-of-emotion. If someone dies in front of you, or you're in a scary situation, you wouldn't smile, would you? ... I wouldn't. However, even though I'd like to either have emotions for the characters, I don't. On top of that, I can't have it so that there aren't faces; doing so would mean that the player won't know who's talking. Sure, I could just put the names on, but actually, I can't. I'm not going to say why as it'd spoil the game but still, I can't.
You can't necessarily be scared playing it when your character has a smile on their face; they aren't Kirsten Stewart.

I have yet another problem, too. Just to make matters worse for myself.. great.
Basically, my laptop has no sound, so I can't listen to the audio. How am I supposed to use sound effectively if I can't even hear it? I can't. Therefore, I'm having to rely on Hotfirelegend to ensure it works, and it's hard to accept it being fine if I can't hear it myself. Not that I don't trust him; it's just a simple case of 'how can I know?'

To end the blog, I figured I should mention what's in so far.
You can play for approximately half an hour so far, which if you ask me, is pretty good considering the time restraints. I'm hoping to have the game completed with about an hour-or-so's playing time, so that shouldn't be too hard.
I will admit though; it's hard for me to tell if it's scary or not as I can't feel the atmosphere of it since 1) I was the one who made it so I know exactly what's going to happen, and 2) I can't hear the sound.
In any case, it should be, so long as it works out as planned.

Close
10/15/2012 07:14 PM
The male/female personality breakdown seems a little stereotypical. Not necessarily a bad thing (I like that there's two different ways you can experience the story), but it did strike me as I was skimming the profile. Otherwise, looks like good stuff. The font is very appropriate, and I like the concept.
Dezz

Close
10/15/2012 07:43 PM
Yeah, I get what you mean with the stereotypical sense in regards to the personality; I just thought it'd make it more interactive for the player.
Thanks!
EternalShadow

Close
10/15/2012 10:09 PM
Yeah, that should be easy. I think it's fine as of now, though.
I've decreased the font size in-game for scenes and such however, since it wouldn't fit.
EternalShadow 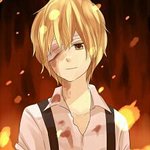 Close
09/07/2013 06:09 PM
its been nearly a year since this thread started the games dead already
EternalShadow

Close
10/07/2013 10:07 PM
well. even if its dead theres people still waiting for it..hopefully someday it be finished at least the demo
HylianPrincess